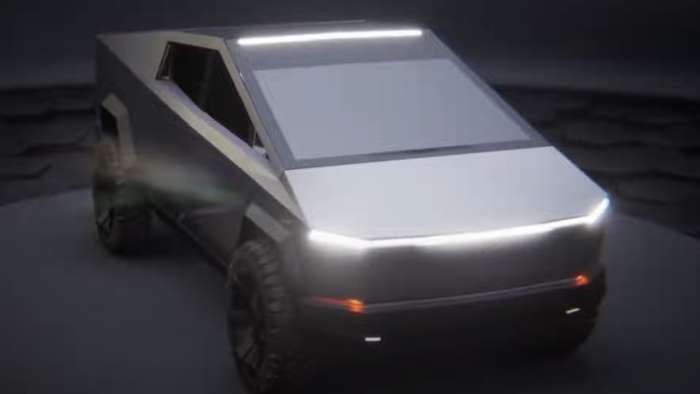 Cybertruck Reservation Holder Gets a Txt From Tesla Preparing for Delivery

We have a Tweet from someone that may give a clue that the Tesla CyberTruck is getting closer to its first deliveries. Let's take a look at what this Twitter user's feed said with replies and comments, and what it all means.
Advertisement

Let's take a look at the Twitter feed of a user who got a text message from Tesla asking about possible options for charging his upcoming CyberTruck to be delivered. First, let's look at the text and what people are saying about it - and then we'll draw our own conclusion.

The Email About the CyberTruck

Related news: Is This An Image of the Latest Beta CyberTruck?

Since we've heard from Elon Musk that the CyberTruck will start deliveries later in 2022, I think we can use that as our "north star" or gauge for deliveries until we hear otherwise from him or Tesla. Therefore, as the time to that date gets closer, we'll likely see more messages and texts from Tesla like this.

Tesla is constantly trying to improve its products and services. I would be willing to bet that the reason this text got sent out is because someone at Tesla had an idea that they should text CyberTruck reservation holders and try to sell them on Tesla energy products. Since the person who reserved the CyberTruck probably already likes Tesla, it makes sense to use that person as a "lead" and try to sell more to them.

I think the green light was given for these types of texts to go out to the people who are in line to get the CyberTruck first, or to a possible small set of people - maybe around 1,000, in order to do some testing and see how people respond. After all, if people don't respond favorably with 1,000 people involved, then you don't have to send this kind of text to any more people and deal with a potential negative backlash with pushing other Tesla products on people.

On the other hand, if even 2% of people respond to this text and decide to purchase Tesla energy products, then it makes sense for Tesla to continue to send out these kinds of texts. If I were working at Tesla and had the idea for this, I'd want to continue to refine the text until it is worded in a way that creates maximum value and conversion for people to buy Tesla energy products.

What Others are Saying About Tesla's CyberTruck Text

Now, let's take a look at what others are saying via the Twitter Feed:

The first reaction was that was this text really from Tesla. The Twitter user, Enginerd32, confirmed that it was indeed from the Tesla Fremont factory.

The next response said it was to ask you to buy the solar and PowerWall setup to charge the truck and provide energy for the house and was pretty certain of that. I happen to agree with this response.

Another user said not to read too much into it. It's likely a sales tactic from a sales person at Tesla. This person used to manage a sales team and the biggest issue sales people have is getting the potential buyer's attention. Mentioning the purchase of CyberTruck is the best way to get their attention. I also agree with this statement - use something the person has a strong attachment to to create interest.

Another user wanted to make sure that this text really was from Tesla, and the Twitter user, Enginerd32, confirmed that it was from Tesla Fremont, with the same number used for buying out the lease, remote diagnostics, etc...

Another user said this was simply a cold call to try and see if Tesla owners will buy other Tesla products and not to reach too much into it.

Also, the user, Enginerd32, has already had two 100 amp lines run from the garage to the house - about 150 feet or so, and that the new electric system in the house was built specifically to plug and play with the PowerWall system.

My conclusion is that this is not a scam. It is Tesla continuing to try and find ways to reach people and sell more of their products from the sales division of Tesla - or whoever had the idea to send this text.

What do you think of this text from Tesla? Is it a good approach to use the CyberTruck as bait to get someone interested?

Tesla Giga Berlin's New Hurdle: It's Not Only the Gov't, but Now Tesla Itself
Teslas Are Sold Out Until 2023, But The Timing May Reverse
END_OF_DOCUMENT_TOKEN_TO_BE_REPLACED