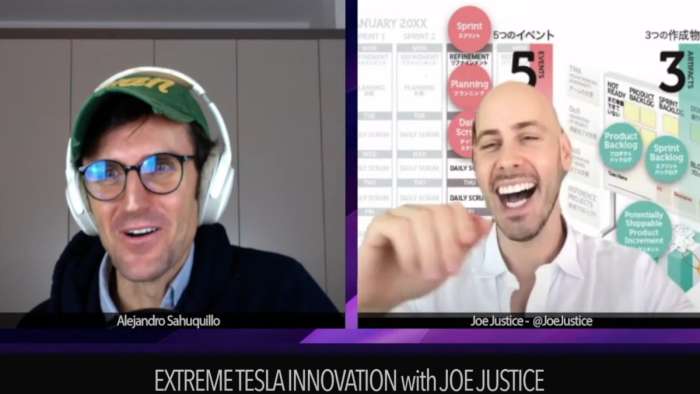 This video with a former Tesla employee talks about how Tesla operates as a company is extremely eye opening and shows that Tesla is likely the fastest moving company in the world today. Tesla doesn't have the typical organization that corporate America has with levels like executives, directors, managers, etc... It instead operates as a crowd sourced hive collective and that means things can move really fast. Let's talk about it more.
Advertisement

Joe Justice, a former employee with Tesla who operated the agile processes at Tesla shares eye opening insights into Tesla.

Agile processes are simply a way for a company to move faster with their features and products using a process known as agile - meaning agility, which lets you make decisions and make more products faster and faster with high quality.

Joe was asked to compare Tesla with Amazon and Microsoft. Joe said that he never had as much fun as he did at Tesla. He said it is because Tesla moves so fast. He feels every company moves so slow compared to Tesla.

If you were to work at Tesla and your values weren't aligned with Tesla's, you would burn out. But if your values are aligned, you would have a great experience. But it is incredibly intense work.

The first day you arrive at Tesla, you get a 4 hour on-boarding experience and you are given an employee handbook not handbook. You are basically empowered to do anything and can talk to Elon Musk at any time. You can work across any department. You are fully empowered. If anyone stops you from doing something that is right, that other person will be fired. This is no matter what position you are in - from floor sweeper to developer.

You get around 25 apps installed on your phone that give you real time progress on Tesla's finance and deliveries. If a customer declines an order, you get a notification immediately. What was the issue? Was it seats, paint, or something else? You are given self management tools to immediately solve an issue that comes up.

You are not assigned to any one area. You immediately go into production and start making decisions to the best of your ability. Joe was an agile expert and so he went into that immediately. Others may have value in robotics or software development and start by going into those areas.

The apps give you an incredibly short feedback loop. It's like an open space conference. You don't know the agenda in advance. Topics are suggested and listed on a wall. You can simply walk to the topic and agenda that you are interested in and start partaking in that discussion. This is the law of 2 feet. This is how Tesla works.

An Example of How Tesla Moves So Fast

One example is when Tesla changed the Model 3 charge rates publicly online from 200 kWh to 250 kWh. Joe got to see how this took place. Here's part of what happened.

In the morning, he was walking in the Fremont factory in the design, test, build area. There was a dumpster bin full of aluminum rods that are bent and the bin was labeled scrap. Joe wondered why there was so much scrap there. A group of people were on a laptop there, which was on top of a German made rod bender. The device takes the rod through the machine and bends it.

Joe recognized what these rods were used for in the cars and watched the people on the laptop using the rod bending device and asked if he could help. The group invited him in. The person there had an idea that if they changed the way the aluminum rods connected to the charge port from the battery pack, that it could increase efficiency - more kWh per pack.

They had the idea and just started bending rods. If they had generated $1 million of scrap rod, it would have been worth it. When the final result of the rods in the cars happened, the Tesla stock price surged by several billion dollars in market cap.

Tesla Stock Will Follow the Company's Speed and Innovation

In 3 hours, form idea to inception, Tesla Model 3 vehicles started to be sold with a 250 kWh battery pack. Later, it would be made public that this was the case and this greatly boosted Tesla's stock price. This was all from an idea that someone at Tesla has and a small group of people being given the freedom to test the idea out and make it happen.

Tesla's stock price is going to follow this rapid pace of innovation. I'm not aware of any company that functions this way - with no managers or organizational structure, but instead complete freedom within an organization. Tesla functions kind of like a Borg Hive mind from Star Trek.

Most other companies are VERY slow in innovation and managing costs. Being innovative and changing things is risky. But with Tesla, change an innovation are fostered and in fact, Elon Musk has said that innovation is a requirement to work at Tesla or else you'll be fired. Tesla spends billions of dollars a year on automated testing which allows a rapid pace of innovation.

I believe no other company will be able to match the speed of innovation of Tesla and its ability to automate testing and make change less painful, they are going to continue to increase their lead over everyone else.

What do you think of the pace of Tesla's speed and innovation? Will Tesla be able to keep moving at this incredible speed? Will any other companies move as fast or faster than Tesla?

Tesla Giga Berlin's New Hurdle: It's Not Only the Gov't, but Now Tesla Itself
Teslas Are Sold Out Until 2023, But The Timing May Reverse
END_OF_DOCUMENT_TOKEN_TO_BE_REPLACED