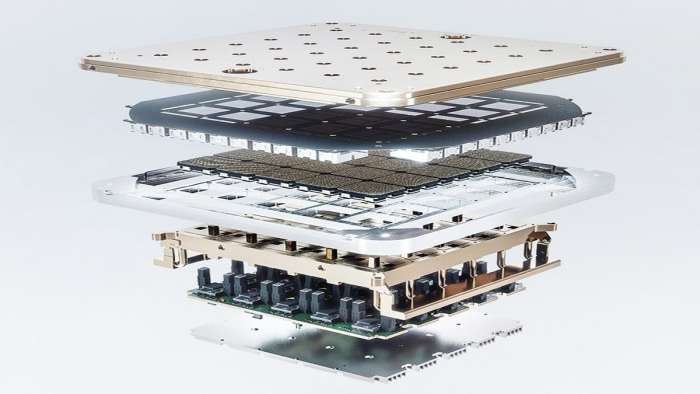 Does This Teaser Show a Tesla Dojo Chip?

We have a Tweet from the user, Dennis Hong, a Director at Romela for Robotics and Mechanisms at UCLA, of some kind of computer chip. So far, the consensus is that this is a chip for its Dojo training computer, or some kind of robotics chip. Let's see what people are saying about this.
Advertisement

It is always fun to speculate and always exciting to see what Elon announces. I have no intentions of stealing the thunder nor ruining the fun - besides I have an NDA…
Just wait and enjoy the AI day!
August 19 5PM PDT
(And I am on my way to Boca Chica now)

After seeing a Tweet about Tesla AI day from Dennis Hong, many are wondering if this image is a chip for Dojo, or a chip for some kind of robotics mechanism for Tesla. Dennis Hong appears to have a non disclosure agreement, so we'll go to this video from Dave Lee and James Douma (an expert in chip design and deep learning), they discuss what they think this chip is:

What is This Chip?

First off, I'm not a computer design and chip expert, but I'll do my best to describe what was said about it.

James Douma thinks this is a packaging technology for putting a bunch of large chips together closed and getting heat out of the package.

James mentioned that typical regular and commercial IC's (integrated circuits), get potted in plastic and sawdered down to a board. You then need to run them at a power density in order to get the heat out. Silicon only works at a certain range of temperatures, so you need to find a way to get the heat out.

Important chips in a laptop or PC will have a heat sync and a fan to blow air which are used to keep the chip operating at a temperature that is acceptable and won't kill the chip. There is a thermal constraint.

"To me it looks like a high thermal flux multi-chip IC package with integrated power electronics. Can't see the inter-chip substrate but it probably includes high bandwidth interconnect."

And to quote James Douma from the video:

"This photo looks like a package for taking a package of 25 pieces of silicon, putting them on a common substrate with a high bandwidth interconnect and getting a lot of heat out of them, which is why there are all those big chunks of metal. The top and bottom plates look like heat plates which might have coolant attached to them."

A substrate is a surface material like silicon that is used as a foundation for components such as transistors and integrated circuits.

To quote James Douma from the video:

"This is exotically unusual."

What Will the Chip Be Used For?

The picture isn't a chip though, it's a package and is an extreme example of trying to have an optimized architecture. Dave asked James if this was for Dojo. James' first thought was that it was for Dojo.

This approach to building a chip is very different from AMD or NVidia. It's going to be a tightly coupled package that is much smaller, closer together, than most packaged chips designed to do processing.

However, according to James, this isn't as cheap as it would be to just produce a more loosely coupled chip design, like AMD or Nvidia would do.

Conclusion: We think this chip will be used for Dojo to help process millions and millions of videos, fed to Tesla's neural net.

Will This Chip Be Unveiled at AI Day?

I think the chip will be unveiled at AI day and the details of what each part of it do will be described. I think Tesla will look to recruit AI experts and chip designers to help Tesla realize the vision for this package.

I think there's going to be other things unveiled at Tesla's AI day and this package is something I'm looking forward to learning about both in terms of purpose and architecture. James thinks the unique architecture of this package will get people excited to work for Tesla.

Lastly, here's another YouTube video from Dr. Know It all, which is a little shorter and shares some of his ideas:

What do you think this chip is? Is it for Dojo, a robotics project, or something else? Will Tesla reveal this on AI day?