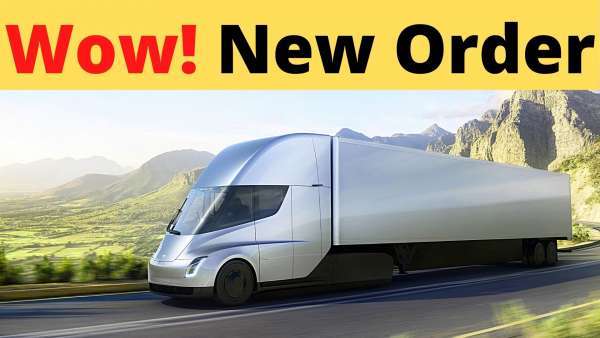 Tesla has secured a new order for 10 Tesla electric semi-trucks and 2 Megachargers with almost $2 million in US government support, Electrek reports.

This is part of a new government incentive that aims to speed up the electric semi truck production and adaption by logistical companies.

Momentum, a company who helped MHX formulate the project and apply for funding, wrote about the initiative:

"MHX sought funding from the MSRC’s Zero & Near-Zero-Emission Trucking-to-Warehouse, Distribution, & Intermodal Facilities in Riverside & San Bernardino Counties grant program to support the purchase and deployment of 10 battery-electric Class 8 Tesla Semis as a part of its efforts to electrify its fleet of trucks in the South Coast Air Quality Management District."

"To charge these vehicles, MHX will also purchase, install, and operate two Tesla Megachargers at its MHX-Napa Fontana distribution facility in Fontana, California."

The Tesla Semi has been delayed multiple times and never seems to arrive. In recent days, one of the largest customers (PepsiCo) has assured that it will receive the first ones at the end of this 2021, but after Elon Musk has raised doubts about it.

PepsiCo itself, one of Tesla's biggest truck customers, has said it expects to receive the first 15 trucks by the end of this year. If they have said that, it is because the manufacturer has estimated it that way, but Elon Musk has once again raised doubts.

Just a few days ago, PepsiCo announced that it expects the first 15 units of the Tesla Semi-electric by the end of this year. This is in line with recent statements from Tesla indicating that its electric truck would go into production this year with the first deliveries to customers before 2022.

According to the American multinational, one of several large companies that have announced firm orders for the Tesla Semi, they plan to receive fifteen Tesla Semi tractor units by the end of 2021, according to a statement. It's still a small fraction of the more than 100 trucks they ordered from PepsiCo shortly after Tesla first introduced the truck in 2017.