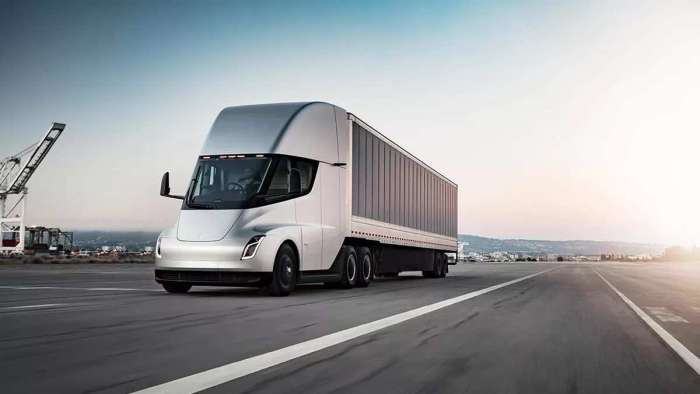 Unpacking The Slew of New Updates On The Tesla Semi

The Tesla Semi has been back into the news the past couple days. Tesla has shown they are serious about getting this vehicle to market given their recent decisions that will help production move swiftly.
Advertisement

Tesla plans to deliver 15 electric Semi’s to PepsiCo by the end of 2021. This is being branded as a sort of coming out party. It will be interesting to see how Tesla will work with PepsiCo to pull this off.

Why PepsiCo is involved with Tesla

PepsiCo is doing this as part of their zero emissions initiative. PepsiCo has been trying to utilize batteries and natural gas in its current fleet. They see the Semi as a logical next step for them in this effort. Tesla has also contributed to zero emissions projects, so these two companies are working together. PepsiCo had previously ordered 100 Semis back in 2017 after the truck first debuted.

PepsiCo joins a list of other companies that have already ordered the Semi. These companies are well-known names such as Pride Enterprises, Fedex, DHL, and many more. These companies will be among the first to get the Semi once it rolls off the assembly line.

Another Tesla Semi spotted while testing

Another Semi was spotted driving around the track at the Fremont, CA factory. This time the truck had a wind deflector on it. Those who got to watch the Semi be put through the paces came away impressed with the lack of road noise they heard.

It is great news that so little noise can be heard from the new Semi while standing and watching the truck pass. However, a video from inside the cabin will be the real test to see how insulated the truck is from the road noise. Given that this is an electric truck, it should fare well in keeping noise out of the cabin. This issue of noise is not something to be taken lightly. Many truck drivers over the years have reported hearing loss due to the constant onslaught of noise in the cabin.

The News broke a few days ago that the Tesla Semi was going to be too wide for Australia’s roads. This alone isn’t a huge problem as this is just one country, and Australia is not one of Tesla’s premier markets. However, the Semi is a very unorthodox vehicle. The most unorthodox part of the Semi is that it has just one seat in the middle, instead of a driver and a passenger seat. Tesla is probably hoping no country has a regulation on the books that requires two seats. Tesla also needs to get enough mega-chargers out on the roads in all the markets where the Semi will be sold.

What could happen next

It is inevitable that there will be more updates over the next several months leading up to when the Semi goes into production. The truck is two years behind schedule due to battery cell supply issues. However, the truck is now well on its way to being in production.

The Semi did go through some rigorous winter testing in the first half of 2020. The sleeper has now been added to the Semi, so it’s possible another round of winter testing could be due. It is spring, but maybe a Semi could be winter tested again in Alaska.

The worst-case scenario is that the Semi gets delayed again, but it seems Tesla is doing what they can to avoid that. That includes launching a heavy trucking division with Jerome Guillen at the helm.

Guillen surely understands the opportunity Tesla has right now. If the Semi is on the road in big numbers in a year or two from now, it will still likely have a monopoly over the electric Semi market.

Check out the last update for the Semi right here, and hopefully there will be another update in the not so distant future.

Tsingshan's Threat to Tesla: EV Maker Is In Battery Crosshairs
Tesla-Funded Research Reveals One of The Biggest Mysteries of EV Battery
END_OF_DOCUMENT_TOKEN_TO_BE_REPLACED