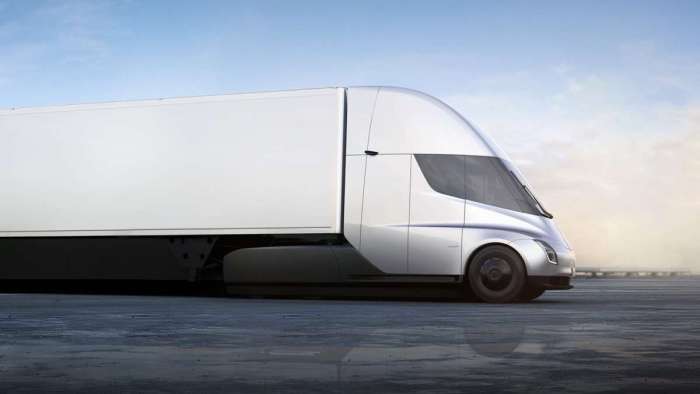 The Tesla Semi was unveiled alongside the Tesla roadster on November 16th, 2017. As of March 2021, there is still no production model Semi on the roadways. Some say the truck may not be released. Others say Tesla is just behind schedule.
Advertisement

The long-awaited Tesla Semi was recently spotted out in California on a test track last week. A white Semi was seen driving at what appeared to be a moderate rate of speed in a brief video. This could be seen as a welcome sighting to those who want to capitalize on a Tesla Semi when the truck is released.

Musk assured the public the truck was coming, but behind schedule back in January

Musk said a month and a half ago that production was on hold until Tesla could make enough battery cells. Musk said back in January, “The main reason we have not accelerated new products - like for example the Tesla Semi- is that we simply don’t have the cells for it.” Musk also said, “If we were to make the semi right now, and we could easily go into production with the semi right now, but we would not have the cells for it.” The truck is about two years behind schedule. However, this may not be a reason to panic. The Tesla brand needs to make sure that the truck will sell once it does indeed hit the pavement. They can do this by knowing which companies will want to add a Tesla Semi to their trucking fleet, as well as trying to beef up on charging and service infrastructure if need be.

Doubts expressed by some about the Semi’s Release

Some outlets have expressed doubt about the Semi’s release recently, and whether it will actually happen. There is some reason for speculation as the Tesla Semi Twitter page has not been that active in the past few weeks. Musk hasn’t come out with much info in recent weeks, though he did project confidence back in January about production ramping up once the needed battery cells were produced. The Semi page is still up on Tesla’s website, so there have been no indications so far that Tesla has thought about scrapping production.

What should we make of the design changes?

One major recent design change is that the window was expanded further behind the drivers’ seat to accommodate a sleeper. At first glance, one of the original prototypes of the Semi looks sportier. The addition of the sleeper was a thoughtful one though despite the fact it gave the truck a less athletic-looking appearance.

The biggest question mark about the Tesla Semi battery

The biggest question is how the battery technology will evolve. Can the range be increased from 500 miles on the top-of-the-line trim? For reference, many Class 8 Diesel trucks can go over 2000 miles before needing fuel. As range increases and the battery technology gets better, the semi would likely become more appealing. All this being said, the money being saved on fuel will bring buyers in. After all, truckers do have to stop often to rest due to government regulations. If the charging infrastructure for these big rigs is spread out across all the truck stops in small towns, the driver won’t feel hamstrung about the reduced range compared to a diesel engine. The remedy for Tesla is to keep improving the volume and size of their battery packs. Last October we learned that Tesla was looking into developing so-called Megachargers for the Tesla Semi trucks.

Should you Reserve a Semi?

The reservation fee on these trucks is $20,000. This might be a good investment to make considering the Semi is slated to be released by the end of the year. However, there hasn’t been much info given out on the truck other than last week’s peek at the Semi at a Fremont, CA test track. It may be smart to wait for more intel from Tesla. That being said, it is unclear how fast these initial production models will sell out. As of now, the reservation tab can be opened at the bottom of the Semi page on Tesla’s website. Speaking of reserving a Tesla Semi, at the end of 2020 Walmart announced that it was tripling Tesla Semi orders.

What do the readers think of the status of the semi? What do you make of its sighting on the test track? Let us know in the comments.

Daniel Cappo reports Tesla developments at Torque News. He has had a passion for cars ever since age five when his grandparents let him drive their old golf cart around their property in Upstate NY. He has attended numerous auto shows and even got the chance to drive a Ferrari California on the track. Ever since Tesla opened up a dealership at his local mall, he's been an avid follower of their cars and technology. Dan has a B.S. in Public Communication from U Vermont. Follow Daniel on Twitter and LinkedIn for daily Tesla News.

Tsingshan's Threat to Tesla: EV Maker Is In Battery Crosshairs
Tesla-Funded Research Reveals One of The Biggest Mysteries of EV Battery
END_OF_DOCUMENT_TOKEN_TO_BE_REPLACED