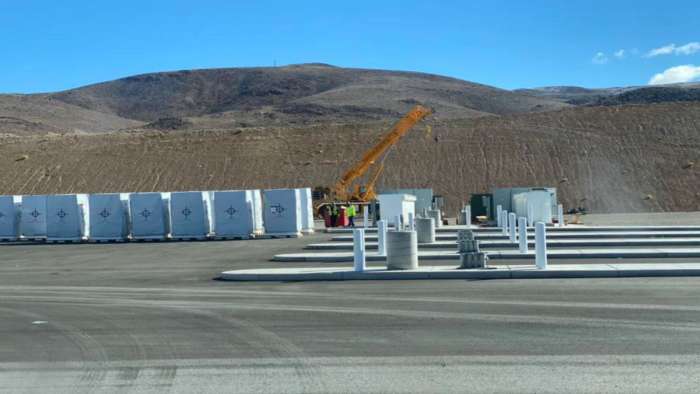 We have our first glimpse at some megachargers just outside Giga Nevada. As the name implies, these are probably going to be even faster and have more throughput than Tesla's superchargers and likely be used for the Tesla semi.
Advertisement

Tesla Megachargers - What Are They For?

To answer the question about what these megachargers are for, let's see what prominent people in the Tesla community have to say:

Sawyer says that it is his understanding that these megachargers are being built for the Tesla Semi test vehicles and for trips between Giga Fremont, CA and Giga Nevada. He says this shouldn't be used as a sign that production is happening, but that it is a sign of progress. Tesla is still focusing on the Model Y and CyberTruck, and then the Semi and Roadster after that.

I think this conclusion makes sense and is logical. Tesla would need to be able to charge semi trucks much faster and with more energy than the current superchargers. I think we'll start to see megacharging stations show up throughout the United States.

He says that we can expect the first Tesla Semi trucks that are produced to be used doing "milk runs" between Giga Fremont, CA and Giga Nevada. These trips of the Semi could delivery 2170 battery packs for the Model 3 and Model Y. These runs can also serve as a benchmark for testing because there is a lot of uphill and downhill terrain between the two Giga factories and carrying full loads will help Tesla see how energy is spent and used. He expects the first Semis to be assembled near Giga Nevada, and for Tesla to build their first Semi Service Center there.

I think this is genius if Tesla is doing it. The genius is that Tesla will use its own products to start with to serve their needs and the Semis will already be making a positive impact.

Another Twitter user pointed out that there is only 260 miles between Tesla's giga factory in Fremont, CA and the Giga Nevada factory. I did a quick check in Google maps and the distance is indeed 260 miles. This means the Semi should easily be able to make at least a one way trip between the two locations.

With the long range Semi… you won’t need a to! 260 miles between the 2 factories https://t.co/9RA3gMkbky

In this video, Elon Musk talks about the semi being able to get 621 miles of range. That's a lot of range! The more range the better for the semi in my opinion. If you can make a trip without stopping, that's the game changer. You charge when you arrive at your destination.

Over on Reddit, there is a lot of talk about the megachargers. Let's see what people have to say.

There is enthusiasm at any sign of progress for the Tesla semi. It seems people are hungering for updates and signs of progress.

There was a comment that Tesla does know how to make pull through spots for charging. I think this was due to some confusing charging stations from Tesla that were seen that were staggered and not all aligned with numbers in each spot. Probably because that location was very small and tight to get chargers installed.

There is talk about the smart decision it is for Tesla to use their own Semis for trucking due to the cost of trucking and the shortage of drivers. It makes even more sense with FSD (full self-driving). Another user commented on FSD saying Tesla is delaying the Semi until FSD is ready. I think Tesla is just focusing on the Model Y first.

Another user talks about how the Tesla Semi must use a supercharger or a megacharger. They believe it was mentioned in passing at the Semi unveiling or one of Elon Musk's tweets right after the event.

Another comment stated that Tesla says it will use less than 2kwh per mile. Assuming this means 1.5 kWh and really minimal overhead, you would still get less than one mile per hour of range. So for a 500 mile model, over 500 miles.

Another user says this about charging: the Model 3 70kWh pack charges at 3 miles/hour at a rate of 250 wh/mile. If the Semi efficiency is at 1.5 kWh/mile that means: the Tesla Semi should charge at 0.5 miles/hour at 120v and 12amps. A 500 mile range pack would then take 1000 hours or 41 days and 16 hours to charge. If this is true, Tesla will need to make these megachargers really charge fast.

Another Tesla user is wanting a flyover of Giga Nevada. It's been a while since anyone has done that.

And finally, another user mentions that Tesla is just so far ahead of everyone else and it's amazing to watch their progress in real time.