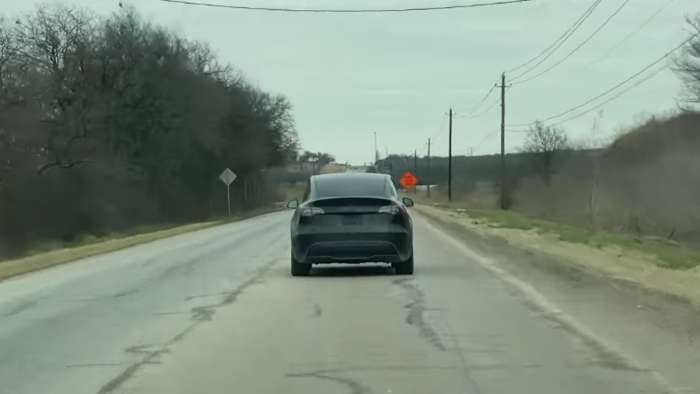 A new video shows the refreshed Model Y driving around Giga Texas. This marks the first time the vehicle has been seen out in the wild.
Advertisement

Of these daring expansion projects, arguably the most exciting is Tesla’s mile-long factory in Austin, Texas. Since Tesla moved its headquarters to Austin, Giga Texas will be the factory closest to the headquarters.

This means, going forward Giga Texas will be the initial testbed for the EV maker’s newest, most daring, and bleeding-edge projects.

According to Tesla, the refreshed Model Y, which will begin deliveries in the coming few weeks, will come with Tesla’s latest 4680 batteries. At the EV maker’s Battery Day event, Tesla said the 4680 cells allow for up to 54% range increase as compared to the 2170 cells that ship with the current Model 3 and Model Y.

In addition to the 4680 cells, the refreshed Model Y is also expected to be the first Tesla where both the front and rear chassis are made out of a single piece of cast aluminum. Previously Elon Musk has said, the new Model Y will be the most advanced vehicle in the world with two-thirds of the body cast.

However, the improvement list doesn’t end there. The refreshed Model Y according to Musk is also expected to come with a stunning new paint scheme that subtly changes with curvature and a new wiring system that can decrease the wires in the vehicle by up to 90%.

Jeff Roberts flies a drone over Giga Texas and documents the factory’s progress. However, Roberts spotted the refreshed Model Y after he wrapped up shooting his latest video and was driving back.

While waiting to make a left turn Roberts noticed a black Model Y heading out of the factory on the newly named Tesla Road. The Model Y stood out to Roberts because it did not have a license plate signaling the spotted Model Y was produced at Giga Texas. You can see the new Model Y in Robert’s video at the 13:39 mark.

As of now, it’s not exactly clear when Tesla will start delivering the refreshed Model Y besides saying in early 2022. However, in a couple of days, Tesla will hold the company’s Q4 2021 earnings call and we should know more then.

We will be sure to keep you updated regarding the refreshed Model Y as more information comes out. Make sure to visit our site torquenews.com/Tesla regularly for the latest updates.

So what do you think? Excited to see the refreshed Model Y out on the roads? Are you able to spot any differences? Let me know your thoughts in the comments below.

tangible wrote on January 25, 2022 - 12:51am Permalink
Stop the hype. It's not a 'refreshed MY made in Austin'. ALL the completed MY vehicles spotted at Texas have been made in FREMONT, shipped to Austin, and recertified as sold from Austin in order to avoid taxes in CA or to be Austin employee vehicles. Proof? Visit drone flyovers and see the DEC 16 2021 tags in the rear windows.