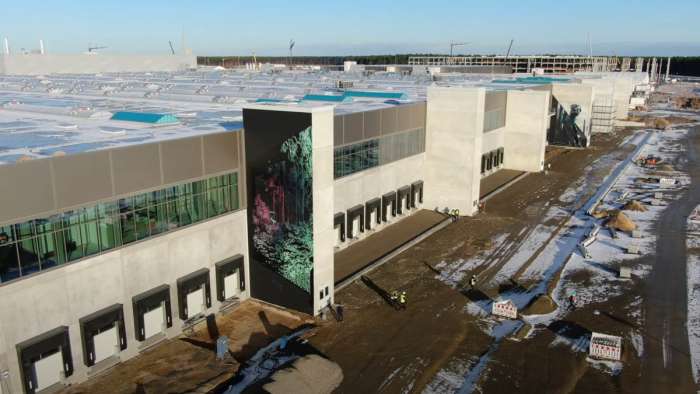 There is some stunning aerial footage of Giga Berlin and in this footage, we can see some mysterious artwork on the walls of the building along with Model Y vehicles in the parking lot.
Advertisement

We see some stunning aerial footage from a drone flyover of Giga Berlin. There are many different unique art pieces, spanning several stories on edges of the building that come out. This is very detailed and mysterious artwork and makes Giga Berlin a truly unique looking giga factory.

What's also interesting is that Giga Berlin, which should be approved any day now for production, still have portions that are under construction and this leads me to believe that there's much more construction to go on for this Tesla giga factory even after the first production vehicles roll off the assembly line.

There's at least 3 stories in Giga Berlin with some sections under construction having 4 stories. That's a lot of stories and I'm sure each story will have its own unique purpose. I'm sure two purposes will be to create Model Y Performance vehicles as well as utilize the unique paint shop. In fact, I think some of these Model Y vehicles are what you see in the parking lot from this drone fly over video.

I've been seeing news stories pop up that Giga Berlin is set to begin customer deliveries in March from an internal Tesla email. Usually these new stories are legit, but we still haven't received word of final approval of Giga Berlin. In fact, this is one of my main questions for the upcoming Tesla Q4, 2021 earnings call - What is going on with Giga Berlin and when will it receive final approval?

I think it would be a huge black eye if Germany hasn't approved Giga Berlin and it's April, 2022. If that happens, will the factory ever be approved? Germany might as well just indefinitely keep the factory from producing cars for customers at that point. What else does Tesla need to do to get final approval for Giga Berlin? I mean, how many issues can you throw at the factory to delay it?

The good news is that I think Giga Berlin will start production this quarter (Q1, 2022), as will Giga Texas and once that starts, it's like releasing a race horse and we'll only see more and more cars being produced as Tesla ramps production in a way that is faster than they have ever done before - even faster than Giga Shanghai.

What do you think about Tesla's art and drone flyover at Giga Berlin? Will Giga Berlin start production in March, 2022?