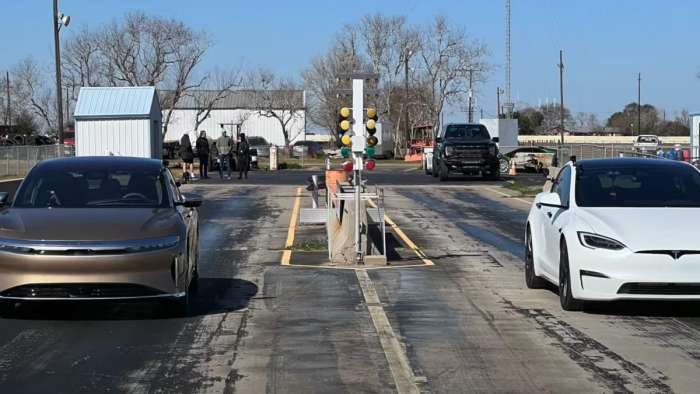 We have a drag race between the Lucid Air Dream Edition and a Tesla Model S Plaid. Let's look at the specs and the results of this epic drag race:

The race starts with both vehicles tires squealing on the road. The Tesla Model S Plaid launches forward ahead of the Lucid Air Dream Edition, leaving it in the dust.

Give race 1 to the Tesla Model S Plaid.

The race begins with the Tesla Model S Plaid not using launch mode. The Lucid Air Dream Edition starts off ahead, then the Plaid catches up and passes it, and finally, the Lucid Air pass the Plaid just barely and wins the race.

The Tesla Model S Plaid uses launch mode and once again, accelerates past the Lucid Air Dream Edition quickly, leaving it far behind. The race is much like race # 1.

In this race, the cars roll at 25 mph to the starting line and then accelerate as fast as they can. The Tesla Model S Plaid edges out the Lucid Air Dream Edition, but not as much as it did when it used launch mode.

These were some great races. The Lucid did great for its first time ever racing. Having Peter Rawlinson who has some knowledge of engines and design is good. I'm excited to see how Lucid evolves over time and if they can scale production of their vehicles.

The results are interesting to me. The Lucid has more horsepower but less engines and weighs more. The Tesla has less horsepower, more engines, and weighs less. It seems having less weight and more engines helped the Tesla Model S Plaid - and whatever engineering went into its engine.

There will be another video with the Lucid Air Dream Edition racing the Porsche Taycan and I'm looking forward to that as well.

What do you think of this drag race between the Tesla Model S Plaid and the Lucid Air Dream Edition? Was it a fair race?

DeanMcManis wrote on January 26, 2022 - 5:19pm Permalink
It clearly is a logical comparison. As they are both new electric vehicles, and both have over 1,000HP. But when I spoke with Peter Rawlinson last year he was clear that Lucid's target in building the Dream Air was NOT Tesla. It was all of the legacy luxury performance automakers. And more specifically cars like the Mercedes EQS AMG53, and the Porsche Taycan Turbo S. Which the Dream Air matches pretty well in quality, tech, comfort, and beats in performance.
tangible wrote on January 26, 2022 - 8:02pm Permalink
In racing, WEIGHT always wins. That's why racing authorities use weight penalties to even out offending team cars.