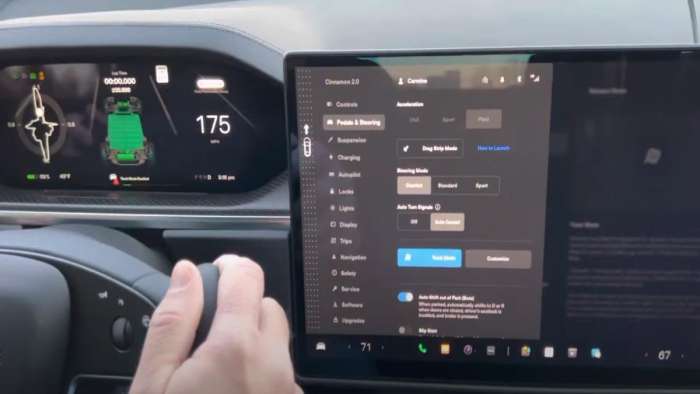 We have a new video of the Tesla Model S Plaid reaching a top speed of 175 miles per hour. This makes it faster than the previous fastest EV, the Lucid Air Dream Edition, at 168 MPH.
Advertisement

We just saw a video of a Tesla Model S Plaid that reached a top speed of 175 MPH (miles per hour). This is faster than the previous top speed for the Model S Plaid, which used to be 163 MPH. This is a decent increase in speed of over 7%.

The Lucid Air Dream Edition, of which there was only just over 100 built, has a top speed of 168 MPH. That speed, and the vehicle, have been dethroned by Tesla now. How did Tesla pull this off?

The second is running Track Mode. This allows a Tesla owner to push their Model S Plaid to the limit and reach a higher top speed once they are on a race track. I'm sure we'll see more videos of Tesla Model S Plaid vehicles racing to see if 175 MPH is indeed the top limit, or if more can be done. If I know Tesla, they will keep allowing higher speeds. After all, the Model S Plaid has a stated top speed of 200 MPH with hardware upgrades.

The video below, from Carmine's Import Service showed a Tesla Model S Plaid with 21 inch wheels. They mentioned that even the 19 inch wheels from Tesla should be able to do 175 MPH. They also said that the brakes feel different overall regardless if the car is in track mode or not - close to the Model 3 Performance.

How Much More Speed Will Tesla Add?

If Tesla added 7% to the Model S Plaid in speed in about half a year, then I'd expect that again in another half a year. I think it's reasonable for Tesla to get to close to 200 MPH within the next year or two. Or Tesla may allow the speed via a software update sooner than that - it all depends on safety and testing.

Some of the top speeds of Tesla's other vehicles are as follows:

There is a * by the said 200 MPH for the Tesla Model S Plaid saying that paid hardware upgrades are required to reach that speed. From what I've read, there are certain wheels and tires that will enable the Model S Plaid to reach a speed of 200 MPH.

Software has limited the vehicle to 163 MPH - again, probably for safety reasons. It will be interesting to see when people are able to hit 200 MPH. Tesla would probably release a software update when that is safe to do - and probably have something that checks the tires and wheels to ensure that it is safe to do so with very clear instructions and warnings.

What did Tesla do to get the Model S Plaid to a 175 MPH top speed? Will the Lucid Air Dream Edition be upgraded to beat Tesla?

DeanMcManis wrote on January 5, 2022 - 1:24am Permalink
Generally, top speed is the LEAST valuable and usable performance metric. But the Tesla Model S Plaid is Tesla's halo car now, and their motors and drivetrain are more than capable of keeping the promise of 200MPH capability. I think that Tesla has been waiting to release their Track package. And I think that will come with new high performance tires, wheels, brakes, and software tweaks to achieve better track performance, both in a straight line, and on circuit tracks. I think that the delay is simply waiting for Tesla's competition to catch up a bit first. But since Tesla did officially promise 200MPH capability for the Plaid model, they will come out with that feature this year.