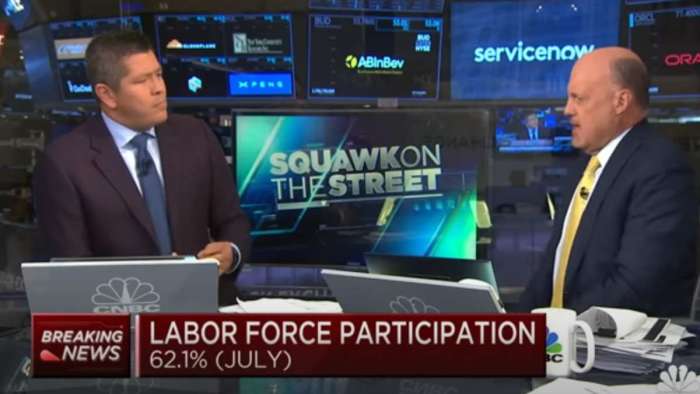 Jim Cramer all in on Tesla's CEO, Elon Musk

Jim Cramer, who has at times been critical of Tesla, says he is all-in on Elon Musk, calling him the smartest man of our time and the best manufacturer of our time.
Advertisement

Jim Cramer all in on Tesla's CEO, Elon Musk

Jim Cramer is all in Musk. Musk is better than anyone and Jim thinks he is a better manufacturer than anyone else in our lifetime. He is close to customers in that Tesla sells direct to customers and Elon is very active on Twitter.

Elon Musk spoke at the latest Tesla shareholder meeting that happened yesterday. He spoke about inflation and that prices appear to be rending down. This could mean that we could see the Tesla prices increases slow down as well - or even possibly go down in the future.

Jim Cramer says that Elon Musk is smarter than almost anybody. Jim spoke about the markets and said that people need to think about what Elon Musk said when he talked about commodities and pricing. Elon Musk said that we could have a soft and shallow recession. Jim is hoping for that.

This "soft" recession could last around 18 months. Jim recommended that if he was the President or governor of Texas, that whoever that is should listen very carefully to Elon Musk.

Tesla is expanding all over the world and Elon Musk sees a global economy. Tesla now has a Giga factory in Berlin, after many months of debate and getting approval. Tesla has Fremont, CA, and now Austin, Texas with Giga Texas. Tesla has Giga Shanghai. All of these locations are going to be expanding.

Elon Musk has a very simple strategy for Tesla as well, which is why I am not worried if he steps down or leaves Tesla in any way. The strategy is simple:

* Get around 12 Giga factories built in strategic locations around the world.
* Produce around 20 million cars per year
* Find a vehicle for every major segment (Cybertruck is next)
* Solve FSD and make it 10 times better than the average human
* Create a humanoid Tesla Bot that can solve the global economy and make a no limit economy

As long as Tesla continues to execute and doesn't lose too many key people or employees, Tesla should have no problem succeeding in its mission in leading the transition to sustainable energy.

Jim Cramer is currently all in on Elon Musk. The big question is, will he change his mind in the future and not be all in on him?

What do you think about Jim Cramer's statements about Elon Musk? Would Tesla be able to succeed without Elon Musk?

For more information, see this video below with Jim Cramer in it: