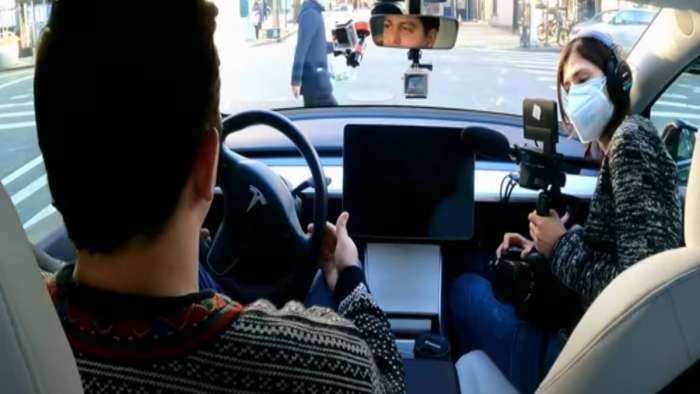 More Tesla FSD FUD - What Is Real and What Is Not?

There is a recent video of Tesla FSD Beta being demoed, this time by CNBC and Taylor Organ. Let's take a look at his video and what is going on and try to see what is real and correct and what is overblown.
Advertisement

More Tesla FSD FUD - What Is Real and What Is Not?

There was a recent video on CNBC, with Taylor Organ, using Tesla FSD Beta. There's been a lot of controversy over this video and the perceived negative nature of it. Tesla bulls submit that FSD is much better than portrayed in the video. Taylor portrays FSD as a problem and that it shouldn't be allowed to test on public roads. Let's go over what is real and what is not.

In the video, we see a CNBC news reporter sitting in the front seat without a seat belt, filming the drive. The very first thing that happened is FSD passed a bus that was in the right lane. Immediately, Taylor was saying geez and how close Tesla was to the bus. In this case, I think the Tesla did the right thing - it stayed clear of the bus just barely and stayed as much in the lane as it could.

There was another scene of Tesla FSD trying to change lanes in an intersection and the news reporter saying Tesla FSD is anything but full self-driving. Which is true... It is not autonomous. It's Beta software that is being tested. That's why it isn't fully released.

The news then went on to say that other autonomous vehicles have professional drivers - without saying what the qualifications of a professional driver are. It is also stated that Tesla is bold for doing FSD, but also taking a huge risk putting incomplete software on the roads.

The Future of Autonomy and Further Driving

The news anchor said that how Tesla introduces autopilot and FSD is confusing. She then goes on to explain some of the features of autopilot. FSD is sold for $12,000, and includes automatic lane changing, automatic parking, and smart summon. The FSD Beta also has autosteer on city streets and traffic light and stop sign control.

I'm puzzled at what is confusing there. The news anchor in the video very clearly explained what the features of autopilot are and what the features of FSD are. She says that none of these packages make a Tesla vehicle autonomous. A Tesla driver is responsible at ALL times for the control of the vehicle.

Taylor, in the car, thinks it is unbelievable that Tesla vehicles could become a robotaxi. He has a demeanor about him that almost wants Tesla FSD to fail and not win the race to autonomy. Why is this? It's anybody's guess... But I've learned that everyone has a reason for the things they do and I wouldn't be surprised if Taylor has investments with Lidar companies, or other autonomous companies. Why else would he be so critical of FSD?

There was also interjection from Consumer Reports. They covered the cabin camera in order to try and game Tesla's system. The cabin camera is used to monitor the driver and make sure the driver is paying attention. My question is, why would you cover the cabin camera? It makes no sense to do that. After a block of driving, the car made a warning sound.

There was another part of Taylor's drive where the car was passing an intersection and the car stopped suddenly. I think the reason for this was because the pedestrian took a step forward, which Tesla FSD Beta is likely going to calculate that they could go out in front of the car.

So far in the video, there is no footage of the car doing successful maneuvers and driving. We're seeing a lot of sudden stops and cars hoking at the driver in the Tesla. There was also a roundabout and the Tesla didn't make the right turn.

Finally, they showed a second roundabout with a successful maneuver. This was just over 10 minutes into the video. There was also another video of the car knocking over a small pillar.

There was then successful maneuvers at 4-way stop signs and intersections. Most of the video was focused on problems and making any problem prominent and focusing on it.

FSD Does Have Problems, But Not This Many

FSD Beta does make mistakes, but it's not constantly making mistakes as this video portrayed. I've seen many videos from Tesla FSD Beta testers with no interventions. This video was overly negative in order to try and shine a spotlight on any and all problems FSD Beta may have.

There has been no reported accidents with FSD Beta, although some sources say that there are 2 now reported accidents on NHTSA. Many times, when there is an accident on autopilot, it's because the driver is under the influence or doing something they shouldn't be - like going greatly over the speed limit.

I think the answer is somewhere in the middle. FSD Beta does a lot of things well and gets some things wrong. It does make mistakes and requires intervention at times. But it isn't constant intervention all the time like the first 10 minutes of this video showed. As with all things, when trying to gain an understanding, look at all perspectives and try to find the truth from all those perspectives.

I'm looking forward to seeing the progress of FSD!

Is the video of FSD Beta as bad as it is made out to be? Is it as great as others make it out to be?

tangible wrote on February 19, 2022 - 3:43pm Permalink
The only real question is the first one. Why is Tesla allowed to test on public roads? All the rest is PoV commentary. It is no surprise that a reporter looking to make his mark and cozy up to his bosses and social media takes on an attitude. Video editing can deliver any message you wish...Mother Teresa would be a villain if the editing was done by a hater.
Neeraj nigam wrote on February 19, 2022 - 10:03pm Permalink
Agree 100%. Fsd is beta. It will make mistakes. You agree that this could happen and are ready to take corrective action when needed. Accident that happen are 100% drivers fault for not doing what they promised to do. As for the anti Tesla group they may have stock in oil companies. We’re it not for Tesla automakers would be releasing an ev prototype by 2100 not 2022. Tesla with all the drawbacks is still much safer than other cars. I have driven from Washington DC to the Subarus on Gw and Georgetown pike with only 1 intervention. I was in control the entire time and ready to take control. I have driven over 2000 miles and have had to make numerous interventions and still because that is what I promised when I got my fsd. It is by no means perfect hence beta but is light years ahead of anything else.
ptruitt wrote on February 23, 2022 - 10:52pm Permalink
I think the debate about using public roads for beta testing needs to center around the expected value of reaching the goal of having a validated self-driving system that is better than an average driver minus the cost to society due to safety infractions and other less significant costs that occur during the development. I might revise that a bit by including the likelihood that achieving the minimum safety goal would be the precursor to vastly safer car transportation as additional sensors and information sharing technologies are integrated into the validated, base system. There is likely value in that to add to the debate. But to go on, what should we do with such cutting edge product development resources? What does our species really need to thrive? Clean water. Housing. Basic healthcare… We are fascinated by this ‘shinny metal’. I’ll admit, I’m enjoying my role as a FSD tester, and fascinated as it steers clear of homeless folks begging at street corners. But where are our priorities?
pongajim wrote on February 24, 2022 - 11:41pm Permalink
The # of Tesla accidents is minuscule compared to other drivers and it's still not clear if those were Tesla's fault. That's why the cameras and the black box record everything.