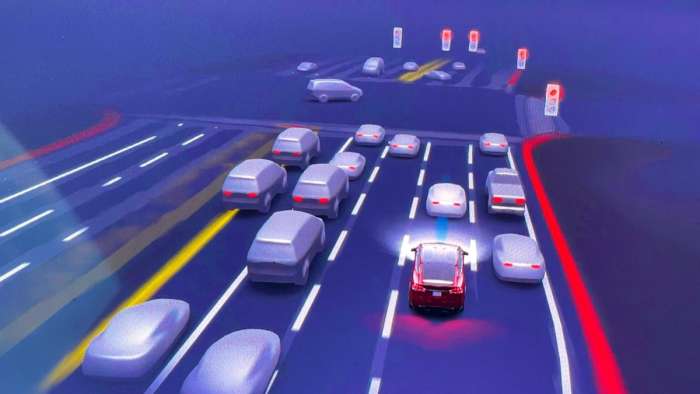 Tesla FSD v10.9 Released - What Are People Saying About It?

Tesla FSD v10.9 has been released in the U.S. Tesla is planning on releasing FSD in Canada soon. What are the first impressions of this software update? We'll go over that now.
Advertisement

The first drive we'll look at is from James Locke, a well known YouTuber who does FSD videos. Let's go over his drive now.

He starts off driving on a pretty straight road into a stop sign and then goes to turn right. With no traffic coming from the left, the car slowly decides to turn right. It could have decided quicker though - it didn't need to wait to turn.

On a faster road, the car goes and stops at a stop light. So far, pretty basic stuff. There was smooth acceleration when the red light turned green.

Now the car goes to turn right on a busy street with a green light. The car simply goes through the green light and turns right and begins coasting along a 55 mph street. So far, no interventions.

The car then needs to turn left, an unprotected left - it waits for a car that was coming, waits for it, and made the safe move to wait for it.

Speed bumps came on the next street and the car took them at 17 mph and 16 mph, slightly less than before. The car then came to a complete stop at a stop sign.

Now at a 3 way stop, the car crept forward and James nudged it forward with the accelerator. There is a tricky stop sign with a two-way street and the car waited and was nudged with the accelerator by James. The car should have seen that it could go and it didn't - that was disappointing.

The car is then on a 50 mph street coasting along. The car needs to turn left and gets in the left turn lane with a late turn signal. It was for the light to turn green. Once it turns green, the car proceeds with the left turn with no problems.

The car is on another 50 mph street. Acceleration and slowing down seem very smooth - there are no sudden stops or jerking. The car takes a left turn on a left green arrow with no problem, staying in its lane.

The car continues to drive until it hits a right lane it needs to merge into and turn right at a green light. It does so without intervention. It could have gotten into the right lane a little sooner, but it made the maneuver. It continues on.

There is an unprotected left hand turn with no traffic stopping it and it made it.

There were no interventions in this 10 minute drive on busy streets.
There were 3 times James had to nudge the accelerator to get the car to move - usually at an unprotected left hand turn or a stop sign with a let hand turn.
The acceleration and deceleration was smooth in all areas.
Speed bumps were handled at 17 mph. I think those could be toned down to 15 mph or more - a setting or on chill mode driving.

Not All Experiences Are Great

We have a Tweet from Whole Mars who said he just used Tesla FSD v10.9 and it was a little too jumpy and hesitant. He says it was extremely busy traffic and that may have affected it.

I believe Tesla still has a lot of work to do, but slow and steady progress is being made. I'm looking forward to Chuck Cook's unprotected left hand turns to see the progress.

lastly, Elon Musk has stated the Tesla FSD beta will be released in Canada in 2 to 4 weeks. I'm looking forward to seeing videos of that.

disappointing first set of drives with fsd beta 10.9. too much hesitation and roughness. @elonmusk

What do you think about people's experiences with FSD 10.9? Is it an improvement? Are we still years away from robotaxis?