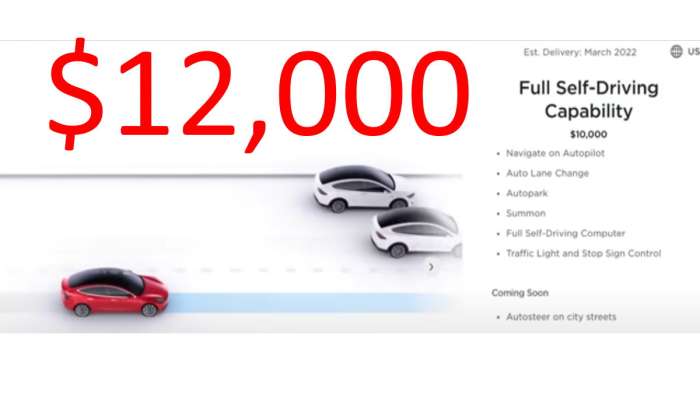 Tesla FSD Price Increased - Why It's a Bargain Still

We've just received news that Elon Musk has increased the price of Tesla's FSD software from $10K to $12K. That's a two thousand dollar increase. Elon Musk said at one time that when FSD is ready and at level 5, it will be worth $100K. That makes todays prices look like a bargain.
Advertisement

Historically, the price increases for Tesla FSD have gone something like this:

We last wrote about how Tesla FSD will greatly help the disabled and senior citizens. That's just a small part of the population that will benefit. The biggest benefactors of Tesla FSD will be those who aren't able to afford cars.

That means teenagers who could drive with a license at 16 years of age, or even someone who is younger than that that needs to transport themselves somewhere, say from a basketball practice to their home. Or those who are penny pinching. They'll be able to take a robotaxi for much less money than an Uber today.

What about using Tesla FSD for shipping packages. In theory, a Tesla van with a Tesla bot could have packages delivered all around an area, go charge, pickup some more packages, and rinse and repeat.

There's so many use cases for autonomous vehicles and the biggest benefit of them is safety and less accidents and deaths. Imagine a world where accidents are a thing of the past and a rare event. Today, accidents from cars are still a leading cause of death, the 11th on the total list of things that can kill you.

Elon Musk has made it very clear the the price of Tesla FSD will increase substantially over time. I think that means we are seeing small increases in prices now, but in the future, prices will be much greater.

I think the price increases will happen as follows:

Toward the end of this year, we're going to see at least level 3 full self-driving - maybe even level 4. As this approaches and Elon Musk is confident in the ability of a Tesla car to drive itself, we're going to see price increases happen more often and with a greater increase in price. It could look something like this:

I think the price increases are not something the market is pricing in or understanding. Even at $100K, a car that can drive itself as an Uber for 10 or more years is going to generate a lot more profit than the $100K spent on FSD. That's why today's prices are a bargain. Because we're in the early innings of FSD. It's like investing in a company that is in its early stages. We're going to see a huge increase in the value of Tesla once level 4 and level 5 are reached because people will realize they can have a car be an autonomous robotaxi.

There you have it, those are the price increases I'm predicting. As I've said, today's prices are a bargain and like investing in a startup company.

How high will the price of Tesla FSD get? How much will the next increase in price be?

DeanMcManis wrote on January 10, 2022 - 1:18am Permalink
I really like Autopilot, and FSD. But unless you are buying a $100K+ Tesla, paying thousands for FSD (especially in its current beta state) is very hard to justify. Especially since you cannot transfer FSD capability between Teslas. If I was set on using FSD, I would probably try the subscription service (especially with a leased model). Outside of a working Robotaxi, FSD's huge price seems out of line with its capabilities (above Autopilot), and that is not even touching the idea of Tesla wanting to change $100K for it.
Scott wrote on January 12, 2022 - 5:05pm Permalink
Spot on Dean. early buyers of FSD have consistently been disappointed and now with additional costs to "upgrade the self driving computer" just to get to the current FSD offering. At a minimum, they shouldn't charge for that unless they deliver what we paid for to begin with. Its frustrating only because most agree it was overpromised for early buyers