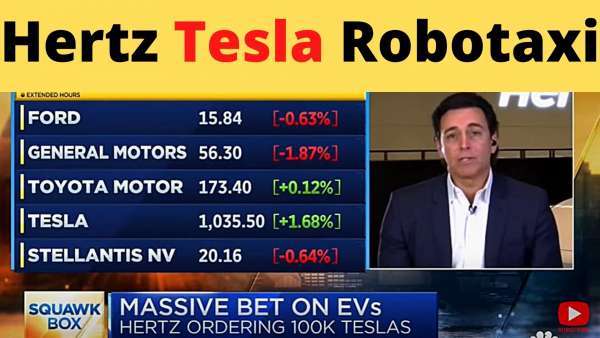 “I think, importantly, what this is going to do we are going to become expert on managing large electrified fleets well before our competition and I think that's going to pay a lot of benefits for us today. And as you think towards autonomy down the road, we think we will solidify our position or create a bit of a moat on being that kind of central component of the mobility ecosystem because many providers of products and services are going to need that. We want to be there for them,” Hertz interim CEO Mark Fields told CNBC’s ‘Squawk Box.’

You see, Hertz didn't just buy 100k of any car, they bought 100k future robotaxis. Hertz demonstrated that they have the vision and adaptability to change with the future, and thrive in it, while their competition will be eaten alive.

First I want to say that this decision by Hertz may convert a lot of people to Hertz from other car rental companies. Also, there will be a large number of Hertz customers now being introduced to Tesla, which will equate to more Tesla buyers and more FSD subscribers. So what’s happening here. Hertz is positioning itself to be the world's largest robotaxi operator.

I fully agree: robotaxis will be at the core of Hertz's business model in 2030, and yes they need to get into the EV ecosystem which includes energy storage now. Hertz went broke recently, a great moment to revolutionize things as there is no internal resistance! I think Robotaxis will wipe out the car rental business. So Hertz is ahead of that.

So, in the future, we will not need to own a vehicle if RoboTaxi tech is realized by Tesla. I think if you are a Tesla owner, in the future, you are going to be forced to pay for FSD as insurance will be very high otherwise. That is if we decide to buy a Tesla. Therefore, the robotaxi will perhaps be of better value for many people.

Elon Musk and Tesla management is probably thinking, wow, we need to build another manufacturing plant, more gigafactories to meet this growing demand.

But keep in mind that Tesla doesn't make cars, so much as make Car Factories. The primary limiting factor is batteries. They could make 2x the cars right now if they had 2x the batteries. That's being worked on, with lots of new battery manufacturing capacity, and LFP (Lithium Iron Phosphate) chemistries that don't use Cobalt or Nickel, so materials are MUCH more abundant. This ramp-up will take a while, but they'll go from 50 GWh this last year to 100x that, which is 5 TWh per year by 2030. That's enough for 20m cars plus semi-tractors plus pickups plus home-backup units.

Some people say we are nowhere close to robotaxis. I kind of agree. There won't be any robotaxis until we get to Level 5 autonomy. I don't think there will be any robotaxis even with Level 4 Autonomy because of potential lawsuits.

As I read one interesting comment on Tesla Hertz Robotaxi subject “the uber partnership to rent Hertz model 3s to drivers will be a bridge but an attentive driver will be necessary to supervise and prove the cars are capable. Once proven. regulatory approval followed by a willing population that would actually trust an autonomous vehicle to drive them is next. I think a minimum of 10 years robotaxis could be possible. If the majority of cars become autonomous and are on a centralized network and smart roads are created that can communicate closures and construction then maybe it could work sooner,” writes a user named Fulcruming at Byond Our Money Youtube Channel.

I am curious to see how this all plays out as we move closer to full autonomy. Will Tesla simply allow any company or private owner a "robotaxi" license to use their vehicles? There's big money at stake and I'm afraid gov't regulation will play its part as well. Nevertheless, still a very exciting time.

Well, Tesla's mission is to accelerate the transition to sustainable energy. They do not prioritize winning over the competition; that's what makes them so rare. Their patents are all open source. Musk has spoken extensively about the pace of innovation of a company being the "patent". If you are innovating fast enough, patents are much less important. In a way, positioning your competition to rely on YOU to innovate, is very strategically brilliant.

LG's New EV Battery Plant Is a Welcome News for Tesla
Tesla Giga Berlin's New Hurdle: It's Not Only the Gov't, but Now Tesla Itself
END_OF_DOCUMENT_TOKEN_TO_BE_REPLACED