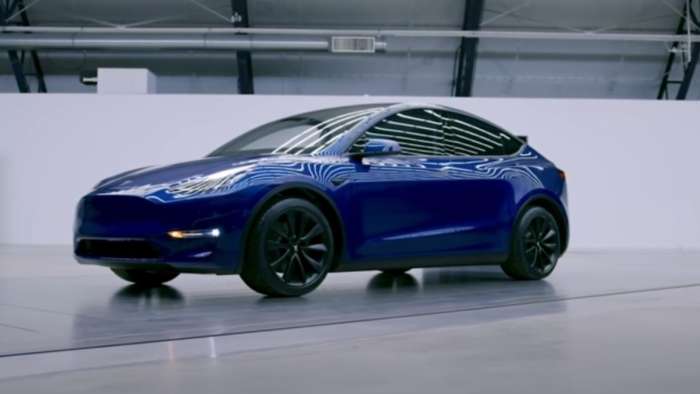 We're starting to see reports that Giga Texas will produce a standard range Model Y for the United States. This could be a 2170 or 4680 structural battery pack vehicle with LFP batteries, and could have a range of around 279 miles.
Advertisement

We're starting to see reports that Giga Texas will produce a standard range Model Y for the United States. This could be a 2170 or 4680 structural battery pack vehicle and could have a range of around 279 miles.

Tesla producing a 279 mile range Model Y for around $51,000 would be a huge win for Tesla and consumers who want a Model Y. In fact, I'd be very tempted to cancel my standard range LFP Model 3 order if I found out I could get a 279 mile range Model Y for just $6,000 more. The Model Y has more room in it and in general is a newer and better car - though the Model 3 is still great.

Even better would be an LFP structural pack for the Model Y so that regular charging to 100% could take place. I'm in the customer base that doesn't mind a little less range and a little less performance for a longer battery life, being able to charge to 100% regularly, and a little less overall cost for the vehicle.

We know that there is an LFP RWD Model 3 available now from Fremont that has a 272 mile range and can charge to 100% regularly. Currently, this is the most energy/fuel efficient vehicle on the market today. This is the vehicle I currently have on order and is scheduled to be delivered sometime in July.

The Model Y Will Be the Best Selling Vehicle

The Tesla Model Y, and especially if there becomes a standard range Model Y with a structural LFP battery pack, will become the best selling vehicle in a couple years. Elon Musk has even stated as much:

I think there's a lot that Elon Musk is thinking that we often don't hear about during his thought process. For instance, a standard range Model Y with an LFP structural battery pack is not something he talked about on the last earnings call, nor has he been Tweeting about it. But it makes sense to do and LFP batteries will be easier to come by and cheaper than Nickel batteries.

I'm looking forward to see what happens from Giga Texas as 2022 and 2023 happen!

Will Tesla produce an LFP 2170 or 4680 battery standard range Model Y? Will we see these vehicles come out of Giga Texas?