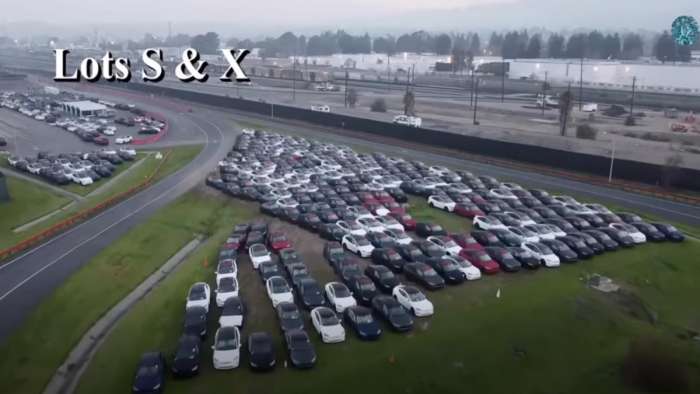 Tesla Fremont production is at full throttle and we can see a multitude of Model S and Model X vehicles. Is the chip shortage over for Tesla? We'll answer that below.
Advertisement

It looks like Tesla Fremont production is at full throttle with pictures of Model S and Model X vehicles filling the parking lots and grass parking lots at Fremont. The cars are parked very close to each other, making use of every possible inch of space.

A Twitter user, Stevez2005, drove past the parking lot and stated that he had never seen the parking lot so full - not even during the end of the 4th quarter 2021, and that the chip shortage may be over for Tesla. Tesla is full of very smart people that are good at solving problems and we could be witnessing a big problem being solved at Fremont - the chip shortage.

We haven't heard much from Tesla about the chip shortage in the past few months. It hasn't been talked about as much by the general media either and we wonder how big the turn around is for Tesla's vehicles.

The fact that Tesla is having vehicles park on the grass tells me that production has greatly accelerated - or there could be issues. Let's go over what could be happening.

How Is Tesla Going Full Throttle in Production?

Tesla has very smart engineers and I think they are programming chips in order to circumnavigate the chip shortage. When all the other chips become widely available, Tesla may have already programmed enough of their own chips to not need them.

Right now, Fremont is the only U.S. factory producing Tesla vehicles at scale. It's good news that they are running so well. I think Tesla is putting some of their EV's out while they wait for parts due to the supply chain issues Elon Musk has been talking about - meaning not all these cars will be delivered right away because they are waiting for parts - not just chips.

Another user on YouTube, NY, said that some of the cars have what is called a "work order" and that means the car is currently rejected while it needs some kind of rework or part replacement because quality control was not passed.

Another user on YouTube, kevin pan, said that they talked to a sales rep at Tesla from Fremont and that the rep said they are ramping up Model X production for the next few weeks.

I think the reason for all these cars is a combination of ramped production, Tesla having the ingenuity to circumnavigate the chip shortage, cars waiting for parts due to the supply chain issue, and probably some cars that did not pass quality control.

However, Tesla Fremont has been around for a long time, and if cars are not passing quality control, I think someone is going to get fired for having that happen - or they will need to fix the problem so that the cars do pass quality control. This is how Elon Musk runs Tesla - you must innovate as a requirement.

Is the chip shortage over for Tesla? Are we going to see Tesla Fremont greatly increase in production still? What are the reasons for all these cars outside?

tangible wrote on January 17, 2022 - 1:23pm Permalink
Tesla is blowing out MY cars, regardless of parts completion, in anticipation of a shutdown to re-tool the MY line for 4680. They can finish them at their leisure. MS and MX cars will make up the revenue difference for a short while, just as they did in late Q4 FY21.