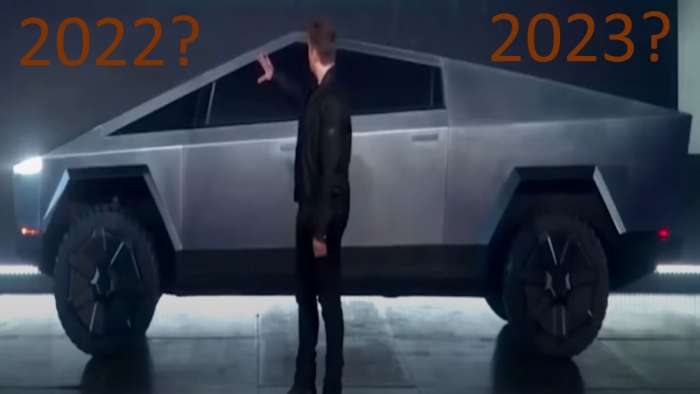 We've just received word that a source has confirmed that Tesla will delay the Cybertruck until at least Q1, 2023. We may not know the reasons for this until the earnings call on 1/26/2022, but expect supply chain issues to be part of the reason.
Advertisement

According to Reuters.com and a person familiar with the matter, Tesla is delaying the launch of its Cybertruck to Q1, 2023, which is about a year from now. The reason cited was to make sure the features and functions of the Cybertruck are up to Tesla's standards. This also comes as Rivian and Ford are now producing electric pickup trucks.

Tesla also removed a message on the Cybertruck order page which said that a customer would be able to complete the configuration of their Cybertruck as production neared in late 2022. This appears to no longer be the case and there are those who are wondering if the Cybertruck is going to be indefinitely delayed.

Tesla nor Elon Musk has made any comments about this. The source familiar with the matter could be an employee of Tesla or someone who knows someone working closely with Elon Musk. We await further word from Elon Musk and Tesla at the end of the closing bell on 1/26/2022.

I think the reason is due to supply chain challenges, the Model Y ramping in Giga Texas and Giga Berlin, and the potential for robotaxis to be a higher priority over the coming years.

An Indefinite Delay of Cybertruck?

Could the Tesla Cybertruck never enter production? It's possible, but it would seem like a wasted opportunity. The Cybertruck would be the last car you would ever need to own and come with an array of impressive features, including range, performance, and function.

However, if Elon Musk truly believes that Tesla is going to reach level 4 or 5 full self-driving, he might be gearing up to mass produce the compact model (Model 2) in order to start a robotaxi fleet. A robotaxi fleet is far more important for advancing the advent of sustainable energy for the planet than having a cool and post apocalyptic Cybertruck. Even though I would really like a Cybertruck, I believe the mission is more important than me getting my truck.

Tesla could also be focusing more on the Model Y as Elon Musk has stated on numerous occasions that the Model Y will be the best selling vehicle in the world in a few years. Elon has stated numerous times that he already has so many projects going on in his head that he can't do much more than what he is already doing. He has to pick and choose his priorities.

I think we'll just see a delay until 2023, but this delay could last even longer. Maybe once we hear that the supply chain issues are letting up, we'll stop hearing about delays and actually see the Cybertruck produced.

DeanMcManis wrote on January 14, 2022 - 12:03am Permalink
Reuters is notorious for publishing unfounded rumors. The source familiar with the matter could be a speculator, or just made up. Reports of fundamental plan changes and delays just before upcoming earnings reports, are sketchy at best.