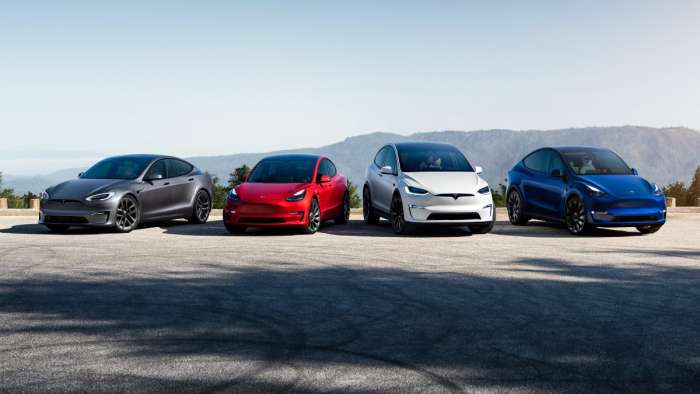 Tesla's Simple Selection Of Vehicle Options Are A Huge Advantage

Tesla has a small selection of vehicles you can order: Model 3, Model Y, Model S, and Model X. There's also upcoming options for the Cybertruck, Semi, and Roadster. This small set of vehicle options gives Tesla a big advantage against other automakers.
Advertisement

Tesla's Limited Options Are An Advantage

Tesla has 4 main vehicles you can choose from right now - the Model S, 3, X, and Y. They were released in order from the S to the X to the 3 to the Y. Each of these vehicles addresses a vehicle segment from luxury sedan, to more affordable sedan. Here's how I would classify each:

Tesla's goals from its initial master plan were to get to the Model 3. I believe the Model 3 to be Tesla's final luxury sedan vehicle and the S and X were previous evolutions of it and will still be available - just more expensive.

These 4 and limited options, with the upcoming Cybertruck, give Tesla a huge advantage. Why is this so? It's because Tesla only has to know about 4 types of vehicles across its entire company. Each employee only needs to know about these 4 vehicles. Not only that, Tesla shares many features across all its vehicles, making it easier to work on a different vehicle. What is similar across all vehicles?

The main differences among Tesla's vehicles are how big each is and what kind of power train, battery, and motor the vehicle has. The Model 3 also doesn't have an HVAC filter. That's pretty much it as far as differences goes.

Let's take a look at the BMW website and the options available to purchase for a vehicle:

That's 27 models including the M Models. What a large pile of vehicles! I wouldn't even know where to begin if trying to buy a BMW... Tesla has a much simpler selection of vehicles and it is much easier to know what you are getting with a Tesla than other brands. In addition to that, Tesla's are just better in performance, range, software, safety, and many other features.

What Are the Options for Other Auto Makers?

We've seen that the BMW has what appears to be 27 options for its lineup of cars. What about other auto makers?

I found 44 different vehicle options across a variety of vehicle segments. I went to ford.com and then clicked on "All Vehicles". This is a lot of vehicles and creates the paradox of choice. It means with more choice comes more difficulty making a decision.

I went to chrysler.com and found 3 different vehicles. They appeared to be ICE vehicles, but it was hard to tell which vehicle was a sedan or SUV just from the pictures. But at least the choices were minimal. Unfortunately, even the hybrid starts at $45,000 which is about what a Tesla Model 3 base costs...

General Motors appears to have 4 main brands of vehicles: Chevrolet, Buick, GMC, and Cadillac. Each had the following number of vehicles:

Lucid Motors has the Lucid Air and Lucid Pure vehicles. That appears to be it. 2 vehicle options. I like that - start small and without complication.

Rivian looks to have 2 vehicle options as well - the R1T and R1S trucks. That is also good starting with a limited number of vehicles.

Nio has 5 vehicle models. This isn't too bad, but there does appear to be some overlap. Their models are the ET5, ET7, EC6, ES6, and ES8. They appears to be mixed between sedan and SUV.

Arcimoto has 5 vehicle models, the deliverator, the rapid responder, the roadster, and the flatbed. I'm a little confused on what the difference is between these vehicles and to be honest think that Arcimoto should focus on getting one electric vehicle right first.

Many of these auto makers have too many options in my opinion. It makes it overwhelming to know what you are buying. It also makes it difficult for a company to manage so many different types of frames and models. The EV players seem to be a bit more simplistic with less options, but even some of them had too many vehicle types. I just wouldn't know what to buy from Ford or General Motors. Chrysler was the simplest of the ICE manufacturers with 3 options, 1 being a hybrid.

I like Tesla's approach better with a few options for each vehicle using the same name. Sure there is a performance and standard Model 3. But they are still Model 3's. That makes it very clear what you are getting. Take each vehicle and just keep improving it over time without making a new name. No need to maintain 40 different types of vehicles each with a different name. That's like trying to manage 40 people instead of 4 - it's a HUGE difference.