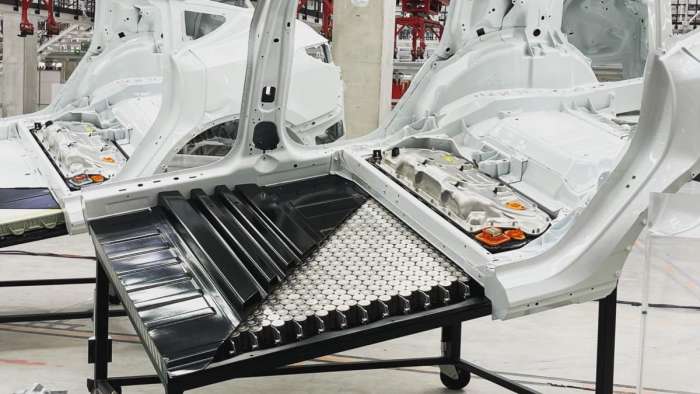 Tesla Disrupted Itself With 4680 Battery Cells

Tesla is a once in a generation type of company. The business is continually disrupting itself and the latest disruption is Tesla's own 4680 battery cells. These batteries are a step up from Tesla's other cell types. Let's look at why this is a disruption and very good.
Advertisement

Tesla disrupted itself with 4680 battery Cells

Tesla has created yet another disruption within itself. This time, it is the 4680 battery cells. These are battery cells that are bigger than Tesla's 2170 batteries and will provide more efficiency in Tesla vehicles. It will make for lighter Tesla vehicles, able to run on less of a battery for the same range. Or, they will be able to be used to make higher performance vehicles, like a high performance Model Y (possibly a Model Y Plaid) and the upcoming Cybertruck and Semi.

This is a disruption within Tesla and that distinction is important. Many companies, once established, stop innovating and grow at a much slower pace. This is not the case with Tesla. They are considered a mega cap company, and yet, they are growing at over 60% per year. The 4680 batteries are going to help them scale production and have higher margins on their vehicles, along with creating higher performance vehicles.

More Details and Speculation about the 4680 Battery Cells

There's a lot of speculation on Twitter about the 4680 battery cells. How long are they going to last - will they be the million mile battery talked about on battery day? Tesla is already releasing the LFP battery with RWD Model 3 (formerly known as the standard range version), and those batteries have a lot more recharges in them than the previous version.

I'm very interested to see the longevity of the 4680 battery cells, and how much range and performance they will give a vehicle, along with how fast they charge. A user (silentWarrior) on Twitter wrote:

I think this user is referring to the packaging of the structural pack as the chassis of the car - that is, the undercarriage of the car. With this being the entire structural battery pack, that would mean less joints for the chassis. I think this will save money and make the car handle better.

I'm looking forward to seeing the specs of the vehicles with the 4680 cells, more specially, the Model Y, and the Cybertruck!

DeanMcManis wrote on February 3, 2022 - 4:35pm Permalink
I'm not sure that you can really self-disrupt. Tesla's 4680 batteries were always going to be an improvement over the current Panasonic 2170 batteries used by Teslas today. The trick was (and will be) scaling up 4680 battery production to cover expanded Tesla EV production worldwide. China (who owns LFP battery patents) will continue producing their less expensive Tesla models using those batteries. And it looks like the new Giga factory in Germany is going to start out with 2170 batteries. Probably due to the delays in opening that factory. But the Giga Texas factory will start up by building Model Ys with the structural battery packs and Tesla's new 4680 batteries. I think that the 4680s will have a very long life in addition to more power and efficiency. But I'm not sure if Tesla will take advantage of this with a smaller/lighter battery pack, or with the same size pack, but more range, or something in-between. The 4680 battery is not really disrupting Tesla themselves, but it will definitely disrupt the EV industry, and Tesla's competition for years to come.
MJC wrote on February 15, 2022 - 2:47pm Permalink
They did disrupt themselves in a way because 4680 delayed all their pipelines, to include Semi and Roadster, later on Cybertruck. Semi and Roadster were basically 2170 vehicles when they were revealed but now they are going 4680.