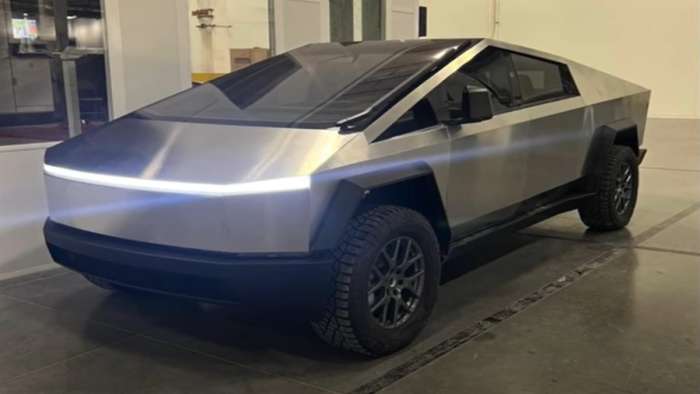 Tesla Should Release A Simple Version of the Cybertruck

Tesla could release a simple version of the Cybertruck and not have to worry about all the technological bells and whistles. So long as it was durable, had a great battery and range, and great performance, I think it would still sell a lot.
Advertisement

Tesla Should Release A Simple Version of the Cybertruck

Tesla could build a simple version of the Cybertruck. It could have 4 motors, great range, great performance, and be durable - all the things that Elon Musk showed at the Cybertruck unveil. Add to this the usual Tesla screen and a great interior design, and I think that would be enough for people to buy it in the millions.

As long as there is full self-driving, and the features are on par with a Model Y, the Cybertruck will do really well. I think the bigger issue is that Tesla is cell and supply constrained and until this resolves, it won't matter if you want the new Roadster or a Cybertruck, those vehicles are going to be put on the back burner.

By releasing a simple version of the Cybertruck, Tesla isn't tying up resources and production into fancy things and will be able to instead put those into mass producing the Cybertruck. A simple Cybertruck will get to customers faster and you won't have to wait as long.

How Could Tesla Release the Cybertruck Now?

The only way for Tesla to release the Cybertruck now would be to have extra batteries and extra chips such that the wait time of all its vehicles was 3 months or less. Even with the chip shortage, Tesla has been able to write software for other chips in order to keep its growth and volumes high, while other auto makers are having to wait for the chip shortage to ease up. With all this in place, I think that would allow Tesla to release the Cybertruck.

Now, here's the cool thing. Elon Musk stated on Tesla's earnings call recently that Tesla is focusing completely on ramping production this year. It is doing all the necessary things it needs to to release the Cybertruck and all its future vehicles. It is making sure it can handle the demand.

There really is no shortcut or secret path Tesla could take to release the Cybertruck now. It really needs to ramp its production, get Giga Berlin and Giga Texas going at volume production (250,000 or more a year), and meet the demands of existing customers. Once this happens, Tesla will start to produce Cybertrucks for customers.