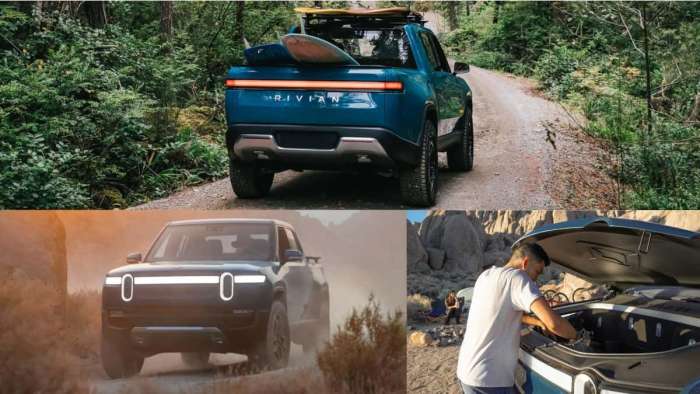 Rivian R1T Spotted In The Wild! Are Electric Pickups About To Hit The Street?

As the summer for the Northern hemisphere begins, temperatures creep upwards and heatwaves rise from the pavement in a haze. It’s time for hot new vehicles to become available. As June approaches, the race to see who exactly will release the first commercial electric Pick-up truck shifts into high gear as Ford reveals it’s F-150 Lightning, Tesla drives their Cybertruck around, and a Rivian R1T was spotted just today in some of the least-camouflaging spy-shot I’ve ever seen.
Advertisement

On Reddit today, in the sub r/electricvehicles, Redditor u/cyclops1706 spotted a spy-shot bedecked pick-up with the Rivian moniker on it. The vehicle is much more truck-shaped than a Tesla Cybertruck, whose other-worldly exterior is supposed to make it nigh-indestructible. The Rivian R1T is notably not a stainless-steel, angular wedge, whirring through the streets of New York City. While it has a blue, grey, and white camo pattern, it’s not hiding much with the striking paint job seeming to do little to mask the comely shape of the truck.

I honestly really do like the aesthetic of this electric truck, but I have to question the muffler wells that are present in the trim, when the vehicle doesn’t have mufflers as it doesn't have to worry about emissions. The Rivian R1T has a simple, one might even say spartan signaling array lending a utilitarian air to the rear fascia of the tailgate. It rides astride fairly restrained/respectable rims, though the wheels themselves are a little large for my taste. More rubber and less metal is better for truck work, in my opinion. Regardless, the Rivian R1T is a delight to see and I’m excited for July to roll around for the release.

We can tell from the exterior that the Rivian R1T riding around the streets of California today was set up for driving in the city with its large rims, but the Rivian website has some other pictures of the R1T showing it in an off-road setting with slightly less wheel and a tad more tire, at least to my eyes. Rivian also claims that the R1T will be able to take you down ‘whatever you call a road’, so I look forward to seeing compete in off-roading events against the new Ford Bronco.

The R1T may be capable of off-roading, but can it compare to purpose built off-roaders, like the Jeep Wrangler 4xe? There’s plenty of potential for an electric vehicle to be absolutely amazing at off-road and the R1T seems to have a lot of the tools necessary to facilitate off-roading: a massive 14 inch ground clearance (that could also explain why those wheels seem like giant hunks of metal), 4 big electric motors with lots of torque, and an estimated 300 mile range for the roll-out model due in July. The R1T might just be able to keep up with ‘the big dogs’. I would point out that, like many other EVs, the battery pack lies flat along the underside, allowing for a ‘low’ center of gravity, but providing a potential for disaster should something somehow puncture the undercarriage (a very low likelihood of occurrence).

The release for the R1T has been pushed back a few times, just like the Tesla Cybertruck, but it was supposed to be dropping in June of this year. While the company seems to think they’ll be ready in July, I’m wondering if the chip shortage and other industrial issues will extend the delay further but I optimistically hope to see the R1T the same as everyone else. I really would like to see more electric vehicles available to perform at track events, and as the NHRA is allowing electric vehicles to enter, a 3 second 0-60 mile per hour capable truck could just find itself winning a few honors for itself.

With vehicles like the Toyota Land Cruiser, which has seen recent electrification at the hands of a mining company in Australia, and the Tesla Cybertruck creeping up in the rear-view, the Rivian R1T hopes to pull ahead and be the first commercially produced electric pick-up on the market. Unlike Tesla, they do not have a pre-existing charging infrastructure, something that could prove a problem in an emergency. The Rivian R1T doesn’t appear to be offered with anything in the way of a gas range-extender either, though that’s not entirely unsurprising as, unlike Toyota, most companies don’t seem interested in keeping the ICE alive.

Vehicles like the Porsche Taycan and Tesla Roadster are sleek and sexy and look like they’d be a lot of fun to drive. With its funky headlights and chillaxed rear, the Rivian R1T manages to make a truck look sporty and fun to drive, too. I’m excited to see what might come of it; the vehicle shows a lot of promise if they can get them onto the roads. Regardless of who gets the first electric Pick-up on the road, the winner of that particular race might find lucrative contracts with militaries in the future. The US Army is looking to begin to Electrify by 2025.

Frank DiMuccio
has been interested in the automotive industry since his childhood. In high school, he spent his free-time rebuilding his car and earned a newfound enjoyment of the grease and sweat of working in the garage. He can be followed on Twitter at @Fdimuccio4 for daily automotive news.