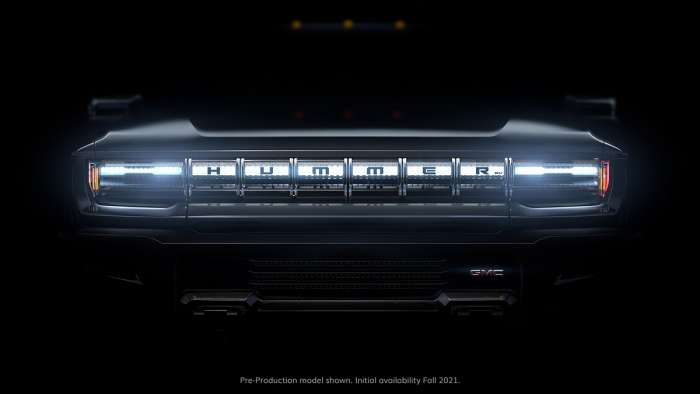 GM officially is finally entering the electric truck/SUV market with the upcoming electric GMC Hummer, ushering in its "Quiet Revolution." But how does it stack up against other announced BEV trucks such as the Tesla Cybertruck and Rivian R1S.
Advertisement

Even though GM has been saying that they are committed to an EV future, firm details of any new EVs have been missing for the past few years, and so other EV automakers have been stealing the press spotlight. However, GMC electric Hummer may soon change that.

In fact with no firm announcements from GM, many were wondering if they were really going to be competing in the EV truck market at all, especially after Tesla rolled out their polarizing Cybertruck, and Rivian showed off their EV trucks and got huge funding from Ford and Amazon. Even Ford showed an impressive demonstration of a future F150 BEV pulling 1.25 million pounds of train cars and cargo. Yet we only heard rumors about GM building a future EV Silverado.

Well, we still don’t know anything about the future of an EV Silverado, but the rumors of GM deciding to bring back the Hummer brand, and also choosing to have all of the new Hummer models be solely powered by electricity, now appear to be confirmed. Now meet the GMC electric Hummer.

Many of you have heard of the Hummer as a giant gas guzzling SUV that GM built up until about 10 years ago, but many of you might not know that the original Hummers were military-only vehicles built by AM General, which was a subsidiary of American Motors/Chrysler. The Hummer H1 was crude and huge, but it was rugged and could go almost anywhere. It came in a convertible model (think of a Hulk version of the Wrangler), and a SUV/Wagon model, and several other variations specifically for government and military use. Sold between 1992 and 2006, it was a beast of a vehicle that got single digit gas mileage, and was an expensive, impractical and uncomfortable vehicle for most consumers. And very few of them were sold to the public.

In 1999 GM bought the rights to the Hummer brand, and started marketing the H1 which was still being built by AM General, and they soon released the more familiar (to us) H2 and H3 models. The H2 was based on the GMC Yukon’s platform, and the smaller H3 was based on the Chevy Colorado’s platform. They were both big, boxy SUVs and they sold relatively well during the SUV craze in the early 2000s, but in a few years time the huge H2 went from being seen as a manly, macho, off-roading, status symbol, to a national icon of wasteful inefficiency, and sales dropped off as Americans were ditching their wasteful gas guzzlers. In 2009 GM announced its bankruptcy, and revealed that the Hummer line would be discontinued.

Suddenly Hummer is Back. But now Hummers Will Be EVs!

The videos show images of stampeding horses, a motorcycle burning rubber and speeding away, giant gears and chains lifting a steel weight in an industrial factory, and each of those action sequences are juxtaposed by scenes of silence, showing how the EV Hummer will be massively powerful and capable, but without the violent noises associated with such power in the past. We will soon see more, as LeBron James will be introducing the GMC Hummer EV in an upcoming, 2nd quarter, Superbowl, 30 second ad spot.

Rivian was founded in 2009, but it wasn’t until the LA Auto Show in late 2018 when they revealed two prototype EV trucks. The Rivian R1T is an electric five-passenger pickup truck, and the R1S is an electric seven-passenger SUV. With production scheduled for this year. Between GMC, Tesla and Rivian, Rivian has released the most details and specs on their upcoming EV truck and SUV. Both the R1T Truck and SUV will share the same EV drivetrain options with the base version, with each model having 4 motors, one per wheel.

There was wild speculation regarding the Cybertruck before it’s November 2019 reveal. Most people were surprised and even shocked at the unconventional “Blade Runner inspired” wedge design which uses cold-rolled, stainless steel body panels that comprise an “exoskeleton”, unibody design, which is in contrast to the body-on-frame construction of most pickup trucks and SUVs.

The base model is slated to start at $40K and use a single, inductive rear motor which drives the base Cybertruck to 60MPH in under 6.5 seconds, provides a 250+ mile EV range, and has a 7,500lb towing capacity. In fact, it turns out the Cybertruck is really cheap to make. Next up is the $50K+, dual motor model, which is supposed to get to 60 MPH in 4.4 seconds, provide 300+ miles of EV range, and have a 10,000lb towing capacity. The top, $70K+, tri-motor (“Plaid”), Cybertruck is supposed to hit 60MPH in only 2.9 seconds, provide a whopping 500+ mile of EV range, and offer 14,000lbs+ of towing capacity. Although power levels were not revealed for any models, the top Plaid drivetrain version is rumored to have around 800HP/1000TQ. All models will include Autopilot (level 2 autonomous driving), with Level 3 AD being a $7K option. All models have a 100 cubic feet storage area, with a rigid, motorized, tonneau covered, 6.5ft long cargo area (bed).

Of course the main competitors will be a gas and diesel powered pickup and SUV models that completely dominate the market today, but I didn’t mention the Bollinger EV B1/B2 truck with it’s 614HP, 4.5sec to 60MPH, 7,500lb towing, dual motor, AWD capability because of its proposed 200 mile EV range, and especially it’s much higher $125K starting price.

How does the GMC Hummer EV compare?

The great news is simply that GM will be actually building this Hummer EV beast in 2021! But the teaser videos have left more questions in my mind than answers. The H2 Hummers were big-box SUVs, but the teaser image only shows the headlight/grill area of the new Hummer, so the vehicle’s design is still largely a mystery.

The 11,500lb/ft number is misleading, because that is wheel torque, but it could be upwards of 1000lb/ft for the top model. It is unknown if it will have two or four motors powering the AWD model, and most importantly we don’t have any idea of what the model pricing and options will be. Over 10 years ago, the gas powered Hummer started at over $63K, but the new EV Hummer will be a totally new design.

GM has no platform other than the Bolt that has been designed and built as an EV. It is most likely that the new Hummer chassis and drivetrain will be the basis for many GM electric vehicles moving forward, from the future Cadillac Escalade, to GM trucks and commercial vehicles, but it will be a huge feat to be competitive against the Rivian, and especially the Tesla Cybertruck in terms of price and range, and still make a profit for GM.

For many of us who knew the previous Hummer models, in many ways this new electric reinvention stands as the polar opposite of it’s previous gas guzzling namesake. Still, it highlights the huge difference of electric vehicles, which can be extremely fast, have stump-pulling torque, yet be nearly silent, smooth, and have remarkably low operating costs.

For now, it is enough that GM is truly in the EV game with their first BEV SUV.

What do you think about the GMC Hummer EV? See you in our next story discussing how Tesla Cybertruck's callout by GMC Hummer EV and Lebron James soared the shares by 20%.

Stephen wrote on February 1, 2020 - 11:06pm Permalink
The Hummer EV is an electric light truck, like an S10/Sonoma in regular and a crew cab would be far better. Tradespeople will replace their oversized F150s in a heartbeat.
Mark wrote on February 1, 2020 - 11:07pm Permalink
I am so excited about the Hummer EV's commercial I cant hardly stand it.
DeanMcManis wrote on February 3, 2020 - 12:19am Permalink
So the superbowl ad ended up just being the other 3 short scenes (above), plus one additional scene where LeBron James dunks a basketball, shattering the plex backboard, in silence. Just before this it shows "Pure Dominance". I'm not exactly sure what the connection is supposed to be between a top basketball player and an Electric SUV, but it's got an aggressive, forceful vibe, so I guess that the way that marketing teams roll these days. Honestly, I was hoping that there would be at least one more nugget of relevant Hummer EV information, like projected range, or cost, but no.