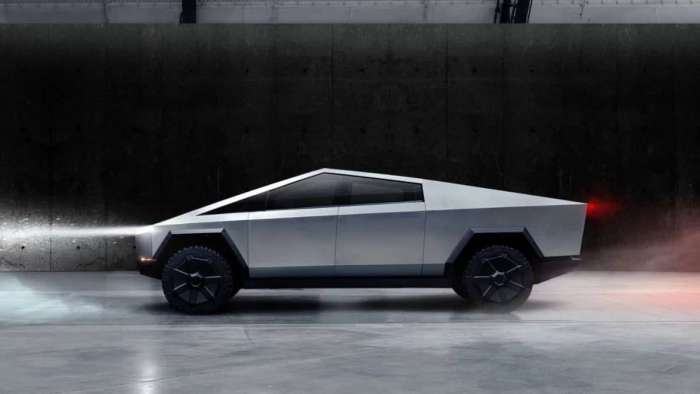 A practical look at Tesla’s cheap but impractical Cybertruck

Tesla Cybertruck makes big claims on paper that may be hard to live up to on the road.
Advertisement

In his debut of the Tesla Cybertruck, company CEO Elon Musk was right about one thing: Without building electric pickup trucks, you can’t get the world to drive electric cars if without electric pickups.

No fewer than 10 automakers, including Tesla, are now planning to build electric pickups by 2022 or 2023, including Ford, GM, startup truck-maker Rivian, and now Tesla. None is more eagerly anticipated, however, than Tesla’s newly unveiled and unusual-looking Cybertruck.

Musk cited some impressive specs for the truck, including 500 miles of range, 3,500 pounds of payload capacity in a 6.5-foot bed, towing capacity of more than 14,000 pounds, and yet acceleration from 0-60 mph in less than 3 seconds. More unusually still, the truck is built from stainless steel and comes standard with bulletproof windows.

Picking on Ford F-150 ads, Musk said “If you want a truck that’s really tough — not fake tough — you want a truck you can take a sledgehammer to, doesn’t scratch, won’t dent…” In its introduction, Tesla took a sledgehammer and a gun to the truck’s sides and windows. The windows cracked, but the sides remained intact and the bullets didn’t penetrate the interior.

What Musk didn’t say is that the Cybertruck’s unique styling is likely driven by cost savings, which Tesla’s bottom line desperately needs, but which brings compromises in functionality.

The tell-tale is in the sharply peaked roof line, from which the rest of the styling falls. To a trained observer didn’t land where it is, across the center of the cabin, just to make the truck look like a Blade Runner prop.

The second key is the truck’s cheap-to-produce flat windshield, sloping up to that roof peak. Big pickups push a lot of air and have trouble getting decent fuel economy on the highway-much less 500 miles of range from reasonably sized and affordable batteries. It’s hard to make any vehicle slippery with a flat windshield. About the only way to do so is to lay the windshield back as far as possible. That strategy gave birth to the strangely rearward roof peak, over the heads of front seat occupants, and it brought other compromises, as we’ll discuss below.

Perhaps even more obvious than the Cybertruck’s steeply raked, flat windshield, are some of its specs. The 3,500 pound payload and 14,000 pound towing capacity sound likely to place the Cybertruck into the federal government’s Medium Duty, rather than Light Duty pickup category. That could be key for

Tesla, because it would mean the company won’t have to spend billions to crash test the truck, as other automakers must do with passenger pickups, such as the Ford F-150. Medium (and Heavy) Duty trucks aren’t subject to such crash standards.

To make the Cybertruck heavy enough to carry 3,500 pounds - and then add that 3,500 pound payload to its gross weight capacity, especially with its big, heavy, 500-mile battery pack—likely throws the truck over the federal government’s 8,500-pound gross-(loaded) weight threshold for Medium Duty trucks.

We should note that Tesla has revealed only a few of the juiciest Cybertruck specs in detail. Most importantly, Tesla did not reveal either the unloaded or the gross weight of the truck. We also don’t know, for example, how long, wide, or tall it is, or its wheelbase or battery capacity. With a $39,900 entry price, the base version with its 250 mile range is likely to use Tesla’s largest current battery of about 100 kilowatt-hours. You can do the math from there. The Cybertruck’s closest rival, the Rivian R1T, has a top battery spec of 180 kWh for a claimed range of “over 400 miles.”

While the truck’s sheer weight and solid outer structure have raised questions about the outcome for smaller cars it may hit in accidents, the outcomes are unlikely to be much different than if those small cars were hit by any ¾-ton truck from any other automaker.

Federal regulators figure consumers buy Light Duty pickups, while Medium and Heavy Duty trucks are for commercial businesses, contractors, and fleets. While contractors might love the Cybertruck’s stainless-steel body panels that won’t rust even after many winters of plowing snow, for other uses the Cybertruck’s shape could make hauling and loading difficult. Ask any owners of first-generation Honda Ridgelines, and they’ll tell stories of vendors refusing to dump loader buckets into their trucks for fear of liability if they damage one of the aerodynamic flying buttresses behind the cab—very much like those on the Cybertruck, only smaller.

Watch how Tesla Cybertruck sizes up with Model and a conventional pickup truck like the 2020 Ford F-150 and click to subscribe to Torque News for daily automotive news analysis.

At the unveiling, Musk made a big deal about the Cybertruck’s 30X cold-rolled “exoskeleton” steel body.mBut Tesla isn’t the first company to build a pickup with an aircraft-style unit body. Ford built such a
unibody pickup in 1963, followed by some small trucks such as the Subaru Brat in the 1970s, and finally the Ridgeline. None before, however, has been built from stainless steel.

The peaked roofline from which the rest of the Cybertruck takes shape brings other compromises too. Those flying buttresses chop the rear visibility that pickups are known for, and the downward-sloping roof in back will cut into headroom, access, and the view out from the rear seat.

All this doesn’t mean that Tesla’s Cybertruck won’t be successful. On the contrary, Musk reports that the company took 200,000 deposits for the new truck in the first week. Tesla seems to have found a niche among consumers who want a futuristic, ¾-ton electric pickup.

Buyers who want an electric truck to do real work, however, may be better off skipping Tesla’s on-paper specs and waiting for more practical offerings from Rivian, Ford, or GM. For them, the biggest benefit of the Tesla pickup may be the downward pressure it puts on prices of other electric trucks.

DeanMcManis wrote on November 29, 2019 - 2:52am Permalink
I don't think that the Cybertruck's design was driven by cost savings. I think that Musk worked through design ideas in building a very tough and powerful truck, and he wanted to have a sharp, striking design that would not look like every other pickup out there, only electric. If you look at full sized pickups today, there is very little that separates the styling from one to the next. And Tesla knew that eventually Ford, GM, and even Chrysler would offer their version of an EV pickup truck. And most likely their pickups will look identical to their gas/diesel powered pickups. Rivian and other small volume EV truck makers are pretty much clones of existing pickup designs, for good and bad. Tesla made some compromises for their stainless steel panels and sharp styling, but from the videos that I've seen of people riding inside the Cybertruck, it is pretty spacious, and the roof cut lines aren't intrusive for those who don't need to wear their ten gallon hats inside the truck. The Cybertruck dimensions are shown to be almost identical to the Ford F150, and that is also demonstrated in the truck pull video. It is quite likely that Tesla will hit their carry/tow load and performance targets, as their team has likely already tested the design of the truck before making those statements about it's capabilities. Most all of the performance and range goals could be figured from the Model 3, Model X, and Plaid batteries and drivetrains. Although I suspect that Tesla is still hiding a winning card of their next generation, Maxwell, dry electrode batteries and possibly ultra-capacitors, in combination with the new 3-motor design to give them a real edge in the EV market. It is still quite possible that Tesla will announce a smaller, more conventionally styled pickup later on, which would essentially be a Model Y with an open bed in back, to compete against the mid-sized trucks like the Ford Ranger and Chevy Colorado. Tesla did come out with the Model 3 after the S, and soon we will see the smaller Model Y that followed it's larger Model X brother. Regardless, Tesla seems to have gotten a LOT of attention with it's Cybertruck, and it will likely sell well just as it was originally shown. It is definitely not a truck for everyone, but it doesn't need to be to succeed.
John Goreham wrote on December 2, 2019 - 1:57pm Permalink
Good analysis. That said, I'm surprised that green vehicle and general vehicle media even bother reporting Tesla's "Entry" and "Base" vehicle prices anymore. Even Elektrek was using the term "Bait and Switch" after the Model 3's launch. (March 4rth, 2019)
Eric Evarts wrote on December 3, 2019 - 3:30pm Permalink
Not so different than any other automaker.