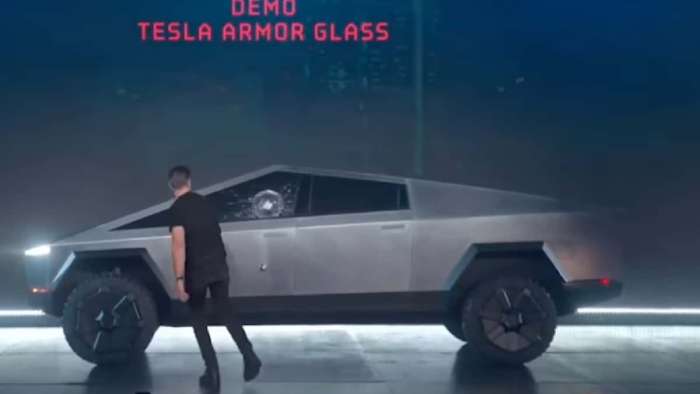 Tesla's livestream Cybertruck reveal had some cringe-worthy moments. Here is the best one.
Advertisement

Tesla launched its long-awaited all-electric pickup truck last night to an adoring crowd of EVangelists. The rest of the world was able to watch it via a livestream. Like all Tesla reveals, the production quality was outstanding and Elon Musk remains the undisputed spokesmodel champion of the automotive world. Unlike some past reveals, this one had a great blooper reel moment. 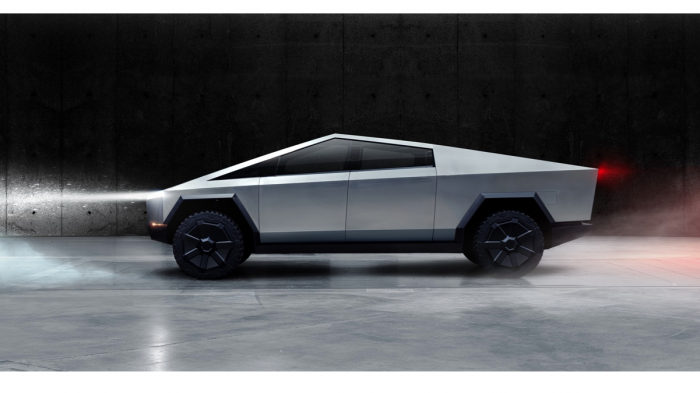 Setting aside the ridiculous look of the truck, which we will cover in a separate analysis, the reveal had a focus on the truck's innovative new level or ruggedness. Elon Musk, we assume to the horror of the anti-gun lobby, displayed his knowledge of personal protection firearms by saying the truck is impenetrable to a 9mm full metal jacket (FMJ) round. For those of you who don't follow the firearms world, a 9mm round is a common caliber. It is roughly equivalent to a .38 caliber (diameter) round. It is used in a wide variety of semi-automatic handguns. The FMJ part is odd, because most concealed or open carrying legal gun owners would not opt to use that round. The full metal jacket (usually copper) helps a round to penetrate certain things, perhaps a car. But it also makes the round poke holes rather than expand and exert its full energy potential in a soft target (people). For many, the 9mm has been replaced by a slightly larger 40-cal round, but enough with all that gun talk.

To demonstrate the bullet-proof-edness of the new Cybertruck, Tesla did two demonstrations. First, it dropped what looks to be a steel ping-pong-ball sized object from a distance onto "normal automotive glass." The glass cracked but did not shatter or break. We cannot understand what that illustrated except that normal glass could withstand the ball. Next, Musk's magician's assistants dropped the same ping pong ball from a higher distance onto Tesla's armored glass. It bounced off. Cool.

Then Elon Musk asked his lead minion named Franz to further demonstrate the bullet-proof-edness of the Cybertruck by throwing the silver ping pong ball at the Cybertruck's side window. The result, as shown in the video, was that the ball shattered the glass and created a hole larger than a 9mm FMJ round. Huh. Musk and Franz looked like somebody just stole their bicycle at this point. And America heard the CEO of a public company use an F-bomb live.

Musk asked Franz the minion to throw the ball again at the rear side glass. It again shattered. Thereby providing without a shred of doubt in anyone's mind that the new Cybertruck is not bullet-proof. Nor is it silver ping pong ball proof. At least when thrown by a fit dude named Franz in all black wearing combat boots.

Armen Hareyan wrote on November 22, 2019 - 11:11am Permalink
I agree John. And Musk's F word was disgusting and blasphemous. I lost all my respect for him.
Paul Cahill wrote on November 22, 2019 - 1:43pm Permalink
This thing is hideous! It seriously looks like they spent ZERO time designing it.
DeanMcManis wrote on November 22, 2019 - 2:55pm Permalink
It is interesting that this is the part that you remember about the unveiling of the Cybertruck. Elon Musk definitely stretches the envelope of what is possible in cars, building a family sedan, crossover, and now truck that are quicker than many supercars. Some features like the Model X's Falcon wing doors are interesting, but often most people would choose a normal door and avoid the complexity and cost if asked about the unusual feature. Similarly Tesla models feature a HEPA filter sold as “Bioweapon Defense Mode.” And even though it might have great practicality for people with allergies, most people can do without the feature just fine. Similarly most of us are not billionaires or drug dealers who worry about needing bulletproof glass for armed attacks in our cars and trucks. I agree that they really should have tested the windows with exactly the same method that they used for the public demo BEFORE the public unveiling, but otherwise this is a small footnote in a rather dramatic EV truck unveiling. Since the Cybertruck is still some time before production they have a lot of time to work out the flaws in the "bulletproof" glass. As far as I know this feature is not commonly available on most other cars and trucks sold in the U.S. so it's not like Rivian (or Ford) has better bulletproof glass. I'm sure that limousines have superior bomb-proofing and better bulletproof glass fitted as an option, but I would also bet that the special glass option on the limousines cost more than the whole Cybertruck does.
John Goreham wrote on November 23, 2019 - 8:34am Permalink
You find it interesting that what I remember about a product reveal was a guillotine-type thing on stage, minions dressed like B-movie characters, a guy smashing a pair of windows with a silver ping pong ball, and the CEO of a public company dropping an F-bomb live? Which part would you have expected me to remember better? I've yawned through a lot of these reveals live and via feed over the years. The entire rest of the presentation was exactly the same as all of those. ps - GMC brought its new Carbon-Pro bed to the HQ of our local media group in October and had a sledgehammer on hand for everyone to take turns swinging at the tailgate. Otherwise, that part would have been novel.
DeanMcManis wrote on November 24, 2019 - 3:58am Permalink
I would expect that you would remember the actual truck. It's features, the cost, performance, handling, electronics, software, comparative size, practicality, etc... Good or bad, people are not looking to purchase the reveal or Musk. They are buying the truck.
John Goreham wrote on November 25, 2019 - 11:04am Permalink
I totally get that, and TN is doing multiple stories related to the truck. This story is not about the truck, but about the reveal. And its unique aspects. What I remember from the reveal is Franz smashing two windows, a guillotine type apparatus, and the CEO of a public company dropping an F-Bomb followed by the word God live on video.
sdadsasad dsafasdfds wrote on November 25, 2019 - 11:16am Permalink
Aw, the snowflake was offended by a word and a reference to some made up deity.
John Goreham wrote on November 25, 2019 - 1:03pm Permalink
Nah, I'm from Boston. Adults talk that way here. My kids watching were a bit surprised to hear it though.