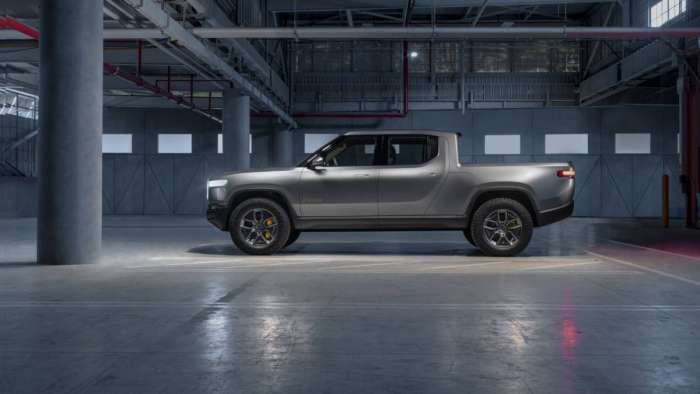 The all-electric Rivian R1T is an exciting EV in its own right, but it's unlikely to convert traditional pickup truck drivers for everyday use.
Advertisement

EV startup Rivian is having a remarkable year. Since emerging from "stealth mode" (smell those Silicon Valley roots!) in late 2018, the automaker, now based in Michigan, has received substantial investment from Ford and Amazon and unveiled two exciting new models set for production next year.

Both the R1S and R1T are well-specced vehicles that attract attention whenever they turn up at auto shows. The R1S is an SUV, lining up against Tesla's Model X and high-end gas equivalents, but it is the Rivian R1T that holds the potential to bring EV technology to one of North America's most vital vehicle categories, the pickup truck market.

Let's not get ahead of ourselves, though, as Rivian's take on truck life is only likely to attract a small fraction of the millions of U.S. buyers who purchase pickup trucks every year.

Rivian R1T: A Truck for Wanderlust, Not Work

Rivian's truck is not one that many owners will put to work, at least not in the weekday sense of the word. This thought won't come as a great surprise to anyone who has seen the R1T prototype up close or watched Rivian employees demonstrate the vehicle.

Activities like camping, cooking out, or even setting up a tent in the bed of the Rivian R1T are a common sight. Hauling work tools, construction materials, or crews never enters the conversation.

It's easy to see why. Rivian is building its brand on "electric adventure." The R1T is a pickup truck for weekend offroading and vacation trips that head into the wilderness.

If Rivian's marketing materials and auto show demonstrations aren't enough to make the case, the design choices underpinning the R1T should be.

While the truck's mooted 400-mile range, 180kWh battery pack, and an impressive towing capacity of 11,000 pounds are appealing, the limited bed space and potentially awkward access to more practical items like the spare tire point to a focus on fun, not hard graft.

On the subject of battery size, here's John Goreham on Peak Battery - The Real Reason Affordable Electric Vehicles Are Failing in America.

Although Rivian has made no claims to serve the heavy-duty work crowd with the R1T, it feels inevitable that the first electric pickup truck will be compared to every vehicle in the class.

Given the recent hype around Rivian, it feels important to temper expectations before such criticism begins.

All-Electric Trucks Will Have to Haul

The best selling pickup truck in the United States is the Ford F-150. Indeed, Ford's F-series combined sold 55% more trucks in 2018 than their nearest rivals, the Chevrolet Silverado and the Dodge Ram.

The common theme among these three trucks is that they can all be put to work. They have ample space in the bed for tools and equipment, with the focus on practicality, durability, and getting the job done.

For an example of what Ford has in the pipeline for its future trucks, check out this2021 F-150 Pickup Spotted in the Wild Hiding Big Changes.

For contractors, utility comes a long way ahead of luxury. Sure, some buyers will spend a lot more to add creature comforts to their cab. Some fully-loaded pickup trucks sell for upwards of $60,000, which starts to put them in Rivian's price range, but the majority of purchases happen at more moderate sales prices.

Fleet managers are another critical part of the market for electric pickup truck manufacturers to win over. The potentially enormous fuel savings will undoubtedly prompt some firms to consider electric pickup trucks for their fleet, but if they can't haul the same load as an F-150, they simply won't make the grade.

Although this is a more subjective consideration, the majority of pickup truck branding focuses on strength and ruggedness. Think "Built Ford Tough" or "Guts. Glory. Ram." These are hard vehicles for hard labor. Even with its impressive specs, the Rivian R1T cannot be described in those terms. Again, this is a truck that focuses on adventure and the excitement of exploration, rather than the heavy-duty aspect of mainstream pickup trucks.

Electric vehicles already face an uphill battle to attract some segments of drivers from their established combustion engine equivalents. The pickup truck category could be the hardest to convince of all, and it won't be a high-end weekend vehicle that does the job.

We'll be examining possible contenders for the electric pickup truck crown in more details this week, including Rivian's partnership with Ford to bring new electric vehicles to market.

Watch This Funny Video Showing Tesla May Need a Tractor Not a Pickup Truck and Subscribe to Torque News Youtube Channel for Daily Reports on Automotive Industry.

See you in the next story, where I am discussing how BMW accelerates it's EV plans charged up by Toyota Prius Prime and BMW i3 success.