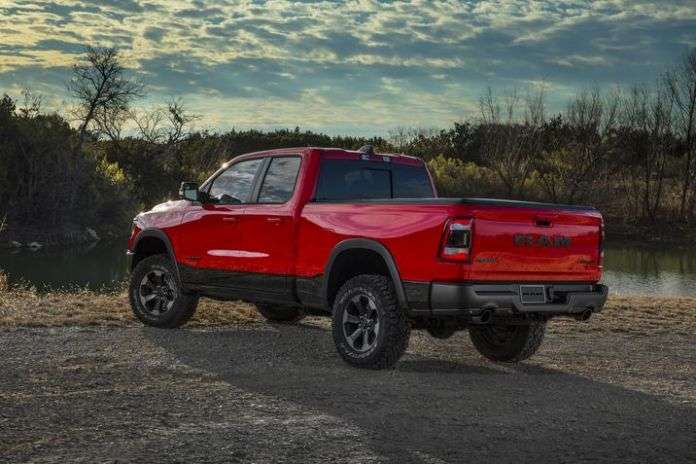 Not all diehard Ram fans are thrilled with the redesign of the 2019 Ram 1500. Some really like the new grille, others say it is not a bold enough change. Some owners are worried about the cost of maintaining the new mild-hybrid system.
Advertisement

One popular Ram forum already has five different threads detailing what Ram fans love and hate about the 2019 Ram 1500 that is headed to dealer showrooms in the coming months. Some fans are concerned about the new mild-hybrid system that will add torque to the powertrains.

TK1, from New Jersey, isn’t thrilled with the overall design but he is open-minded about the changes. “Looking forward to seeing this truck and hearing more about MPG figures with the mild hybrid system. From what I’ve seen so far it’s not as bold and distinct as what it’s replacing. I won’t go so far as to say it’s ugly but it’s far more bland than the 4th gen. They have done a phenomenal job with the interior in my opinion and this is saying a lot as I really like the interior on my 2016 BH. Tow capacity and payload capacity are right up there with the others.”

Knight likes many of the changes, “I guess we all are so used to the 4th gen shape that the styling kinda leaves bit of getting used to. But that all black Laramie is off the hook. Certainly better that what Chevy or Ford are bringing out to the market.” Knight says he thinks the hybrid may help sales. “Even the powertrain is a something revolutionary. No Turbocharging but this hybrid system should have the potential to be more economical than Ford's Ecoboost and the fact that they are still keeping the same HEMI is cool.
I for one think that Ram have done really well with this one.”

Scrap, from California, had hoped for a better design. “I think it looks pretty nice. The only small complaint is the painted panel between the bottom of the headlights and the top of the bumper corners. Seems like they should have done something more there with bumper and lights”.

AK is very concerned about the cost to main the hybrid portion of the powertrain. “I don't like it. I could just imagine that cost to maintain that system. Likely have to sell the house and the first born to replace the battery after warranty. Disappointed that Ram did nothing to up the power in the 5.7L.”

Hoax is worried about the change in size. “I read that the new 2019 RAM 1500 Crew Cab is 4 inches longer...? That means it will no longer fit (nicely) inside my garage, and I do try to park my $50K truck inside my garage overnight, for security reasons. I guess I will have to stick with my 2017 Crew Cab, and to me its size is perfect.”

Hoax isn’t the only one worried about the change in length. Larry, from Seattle, says the size could be a deal breaker. “I have to say I like it a lot. The increased towing and payload for a 1500 is fantastic, and I like the updates to the interior. The only drag for me is my current '17 fits in my garage with an inch or 2 to spare front and back. The new model is reported to be 4 inches longer...that won't fit for sure.”

To Grille or Not to Grille

Nut, from Tennessee, loves the change to the grille. “The Rebel grille on the new design looks a LOT better IMO. In fact, I'd probably go for that over the standard setup. They're showing red in the interior so perhaps a bit of color for 2019?”

Napa, from California, doesn’t like the new front end. “I prefer the grille on my 15 over that style.”

Like anything new, there are parts you may like and others you may not. Casper, from Virginia, says, “I like the return to horizontal fog lights. I don't like the badges on the hood.” Over the years however, Ram owners have found ways to remove badges they don’t like and change out lights to make them more functional or attractive.

Arod asks probably the most important question. “Any dealers have them in stock yet? I think it's ok, but I think it's one of those that it looks a lot better in person.” Arod is correct, every vehicle looks different in person. Color schemes can make some vehicles much more attractive or dynamic looking. Dealers won’t have the 2019 Ram 1500s on their lots until closer to the end of the first quarter.