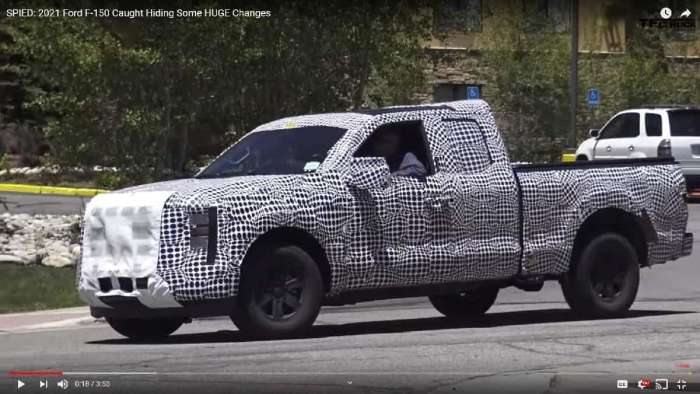 We have seen the 2021 Ford F-150 and agree that there are some big changes coming.
Advertisement

Although there has been little coming out of Ford about the 2021 F-150, the guys over at TFL Trucks spotted a test mule out in the wild as it was undergoing high-altitude testing. Here are some of the impressions about the upcoming pickup. Indeed, we (TFL and Torque News) were able to make comments, even despite the heavy body camouflage.

Perhaps the most important takeaway from this on-the-road meeting with the F-150 test mule was the quiet. The TFL guys speculate, with good reason, that the F-150 may be a hybrid because the truck wasn’t very loud as they followed the Supercab model around. Ford has indicated that in a hybrid will join the F-150 lineup in 2021.

There has been lots of online talk about possible engines. One thing that could be likely is that the 5.0-liter V-8 may be a specialty item. The automaker has been using its turbocharged Ecoboost engine series of powerplants successfully for the last couple of years, so why would you need a V-8 to move the F-150? Interestingly – this is Torque News speculation – it is possible that the test mule was a hybrid that used a small, turbocharged engine to provide added power. It makes sense since there was only one tailpipe visible in front of the left rear wheel. (This is the setup Ford uses for its Ecoboost technology, so the marriage of Ecoboost tech and hybrid tech is the next step in the evolution of the F-150. (Big engines, though beloved by many, need not apply.)

Some might think that the tailpipe placement was to throw off writers who love to speculate about such things, but, smaller, turbocharged engines have been successfully pushing F-150s around for several years. So, dropping the size of the engine that powers the hybrid, while keeping turbocharging for the times added boost is needed, can be successful.

Even with all of the camo on the test mule, some things are very apparent. First, there’s a new front end. It looks like the 2021 departs from Ford’s standard three-section grille, opting for what looks like a heavier, more formal-looking square front end. There are still three sections. However, it appears to be blockier with a large central section likely featuring the company logo. The test crew, of course, needed headlights to see ahead, so the camouflaged pickup did reveal a couple of C-shaped headlights that look like today’s headlights integrated into the front end. The headlights were somewhat lower than those of 2019. Indeed, the placement seems more organic than today. A functional three-section intake at the bottom finishes up the front end.

From the new front end, the design flows toward the steeply angled windshield. Notice the smooth hood line. On the 2019 F-150, the F-150 line stops and dips into a channel the holds the wipers. This is between the end of the hood and the windshield. It gave the F-150 a noticeable “kink.” For 2021, there is no more “kink,” as the hoodline flows into the sharply angled windshield, making a smooth body line. More than likely this was done to improve the aerodynamics of the front end. The line moves on through the windshield and into the roof at the A-pillar. The roofline features a subtle rise that continues to what looks like a roof spoiler.

One readily apparent thing was the placement of the sideview mirrors. Following the lead of other manufacturers, the F-150 has had its sideviews moved from special mounts on either side of the truck cab to the body. Why have they done this? It’s an interesting question, but one of the best thoughts is that looking down into the sideviews is more natural than looking at sideviews that are even with the driver. It also may help the aerodynamics.

At the rear, you can see what might be a multi-piece tailgate. There is quite a noticeable piece in the center of the tailgate which could be a step or similar device, something like the added piece on this year’s GMC pickup trucks.

One other note is there seems to be an independent rear axle, which means that this vehicle should be quite comfy no matter what the road surface. You can see something is different about the rear end if you look closely at the number of bolt-holders one the rear axle.

So, what does this all mean? It means that likely there’s the 2021 F-150 will feature a major restyling. It will sport a new, multi-section front end and restyled body. Aerodynamically, the F-150 will be sounder due to the new placement of the sideview mirrors. Plus, there is a small but meaningful change, as the existing low-pressure point – the hood kink – has vanished. The lines are smooth and wind-cheating.

The design team’s decision to use a subtle spoiler at the trailing edge of the roof cleaned up another point of turbulence. As to power, it is possible that this vehicle is a hybrid undergoing altitude testing. If so, it makes sense that its turbocharged engine may be smaller for the economy, while the turbo is there to provided power when needed. It all makes sense. Finally, Ford is likely using the aluminum building technology that it pioneered several years ago to provide a lighter weight vehicle and fuel economy.

Can you see the TFL image to check things out to see if you agree with the TFL guys or us. Let us know your thoughts on the topic by emailing me Marc Stern at Facebook or Twitter.

Scott wrote on June 13, 2019 - 10:47pm Permalink
It looks like the 2021 Ford F-150 has an interesting aerodynamic styling with the lip on the top back corner of the cab.
Marc Stern wrote on June 14, 2019 - 12:43am Permalink
That's true. I think it works well with the outline of the pickup. The air moves up and over the hood and follows to the windshield. At the windshield, the air then is shunted to the roof where it encounters that lip. Why is it there? It could be to break up the low pressure area at the rear of the roof. If it were not there, then the low pressure area would be rather and upset the aerodynamics. The lip not only directs the airflow but it also sets up turbulence so that the low pressure is essentially nulled. It helps the overall aerodynamic outline.