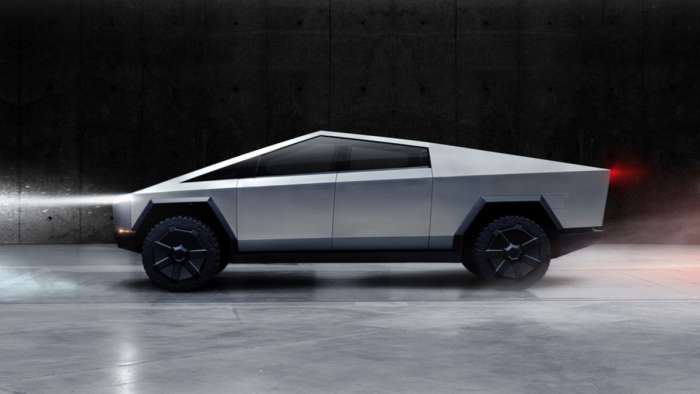 The elusive and fantasy like Tesla truck known as the CyberTruck made its debut late 2019. It has since offered quite an uproar to the general public not only about how weird it is but all its futuristic features. During the Super Bowl 54, GMC released teaser commercials for the Hummer EV, a worthy competitor. Tesla shares soar day after.
Advertisement

The CyberTruck is a revolutionary car, or should I say truck, for a lot of reasons. One of the main reasons is because of how absolutely absurd it looks. Its hideous, but awesome at the same time. Its like that of a tank, or some kind of war vehicle. Tesla however, is not a name that is synonymous with war. If anything, it is synonymous with peace since it promotes a healthier lifestyle and promotes a healthy planet as well. While Tesla hasn’t accomplished world peace or an emissions free earth yet, they have accomplished the genesis of the EV.

Super Bowl 54 kicked off on Sunday, February 2nd , 2020 and in the midst of the game were multiple commercials about the Hummer EV. Lebron James as the host of all the commercials discussing the power, strength, dominance, and silence that is coming. They leak a date of May 20, 2020 that we, the public, will get to see the Hummer EV that we know is for sure coming now. Lebron has probably been testing it out in the last year or so based on the commercial. Either that, or GMC just hired Lebron, since well, he’s Lebron.

The Hummer EV has some striking statistics that they demonstrate in all of the commercials. The first one we will talk about is the 1,000-horsepower figure. In the commercial, a bunch of horses run past the screen and text appears that says the Hummer EV is “1,000-horsepower.” I am not claiming that this isn’t true, or that I don’t believe it, but an EV is measured differently.

Additionally, the CyberTruck claims to have a quarter-mile time of 10.8 seconds, which isn’t 1,000 horsepower, but it’s still pretty fast and not too far from 1,000. GMC claims that the Hummer EV has a whopping 11,500 lb/ft of torque which is bananas. However, Jason Fenske of Engineering Explained, inadvertently points out that this number is misleading. Jason goes into detail about the Tesla Roadster, which is a story for a different day. To stay off tangent, the 11,500 lb/ft of torque actually equates to about 1,400 lb/ft of torque which is honestly still insane! The CyberTruck comes in at 1,356 Nm or 1,000 lb/ft.

Another big thing they touch on is the fact that the Hummer EV can go zero to sixty in 3 seconds. The tri-motor CyberTruck claims 2.9 seconds so there’s a win there. This isn’t a win or lose scenario though. With that being said, GMC is absolutely coming for Tesla especially as Tesla climbs to the highest heights of its career. The stock skyrocketed nearly 20%, despite the Super Bowl 54 and all of the Hummer EV commercials it aired. GM however, had no comparison. The stock rose initially nearly 3% then traded off in the afternoon. It is evident for Tesla that there are people who support the company even when the most American of auto manufacturers tries to square up.

The GMC Hummer EV is definitely an attempt to hype the public on the future that is GM. I am very happy to see the adoption into the market. Is it a desperate attempt to regain market share, or is it what makes America great, the free market? I would love to see GM be a top competitor to Tesla. It would make our lives here in America awesome.

On top of that, we would all have super nice futuristic cars. In closing, I will say that the CyberTruck still doesn’t feel real to me, I would love for it to come out since its such a meme, but the car seems too ridiculous. The Hummer EV is a car I have absolute confidence I will see on the roads soon. Especially because in the commercials they say “See it 5.20.20,” until they are both out all we can do is imagine how the Tesla CyberTruck and The Hummer EV will match up against each other. Here’s to the future.

Tesla understands that it must be a tech company to remain relevant. Now Volkswagen understands it too. Other carmakers should understand this too, so they may remain competitive in the next 7-10 years. Watch this video from Torque News editor Armen Hareyan and click to subscribe to Torque News Youtube channel for daily automotive news analysis.

See you in my next story titled: Here Is What Is Happening With Tesla as Shares Triple Since October.

DeanMcManis wrote on February 4, 2020 - 10:12am Permalink
Tesla, Rivian, and even Ford were called out with GMC's Hummer announcement and teaser ads. It foretells power and performance that rivals the top Cybertruck and Rivian models. Still, some of the biggest questions now remain unanswered like range and price. In fact we don't actually know if the new Hummer will be a SUV or pickup, although it's likely going to be a big, boxy SUV. In some ways it is good that the Cybertruck adopted such wild styling, because there will soon be several new EV trucks and SUVs on the market, and it needs to stand out to be noticed and considered. I think that the two areas unmentioned in GMC's ads will be where the Cybertruck wins over it's rivals, meaning price and range. I doubt that the base Hummer will start under $60K, and the top model will likely be pushing $100K, whereas the Cybertruck is starting around $40K, with the top model starting at $70K. And the Cybertruck will have a market leading 500+ miles of range at the top end. GM/LG have been very good with the Bolt EV in achieving excellent efficiency and range, but the Hummer will likely be as big as the Yukon/Escalade, so it will have weight and aerodynamics against it when trying to be efficient. And they are likely going to need a HUGE battery (like double the Bolt's) to get a competitive driving range. Which will add to weight and cost of the Hummer. 5/20/20 will be the date of the Hummer EV reveal, so at least then we will see what the vehicle looks like, and hopefully we will get some more facts shown about the Hummer's EV range and cost. The Pickup/SUV market is huge, and there are more than 250,000 Cybertruck per-orders, plus the Cybertruck will share much of it's drivetrain with other Tesla models, so outside of the new body there is little to slow the Cybertruck from being built soon. In fact with the model Y coming out 6 months early, and the Cybertruck's strong demand, I think that we will see the Cybertruck out before it's projected production date, if not later this year, then maybe early next year. The Hummer EV is slated to come out in Fall of 2021, which may be a year after the Cybertruck and Rivian models are on the streets. Regardless, it is nothing but great to see active competition in this EV market!