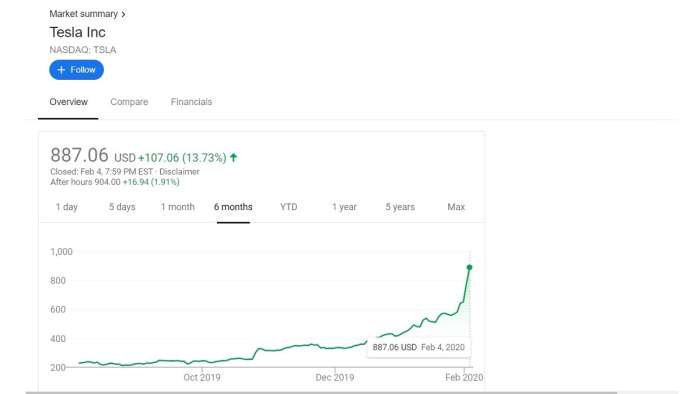 People who are betting against Tesla are the ones who are really feeling some pain right now.
Advertisement

Tesla’s stock price has more than tripled since October, it is I’m part due to the genius that is Elon Musk, and I’m not even a fan boy. People believe in his business, and on top of that, they believe in him for the appropriate business decisions that will lead our planet onto a healthier course. One thing that may be causing the share price to blast off like SpaceX is all of the bears that are cutting their losses and jumping aboard.

Tesla had a rocky time managing the budget friendly Tesla, the Model 3 in the beginning of 2019. They used approximately 1.1 billion dollars in costs of goods sold for the Model 3 which cause the company to be less than appealing in terms of investment. The battery powered company rose to the responsibility in the latter half of the year after reporting two consecutive quarters that were profitable. Unfortunately, Tesla recorded an annual loss for 2019 but their growth and perseverance hasn’t gone unnoticed. According to the New York Times, Tesla reported an annual delivery increase of nearly 50%, a sales increase in automobiles of 13% and their costs were down 7%. This is demonstrative of the path they have decided to pursue.

It is no lie that Tesla has been a finicky investment in the past, but once again the product cannot be refuted. Tesla has the market cornered when it comes to the future of our battery powered machines that are also able to keep our dog safe.

More than that, the current valuation of the company is a call for the future. Tesla has pioneered an entire market segment and it is apparent that competitors are trying to penetrate this new niche market, which will eventually be the standard. The UK has already decided to decrease their ban on petrol cars from 2040 to 2035 which could be a factor for the growth seen today by Tesla. This would obviously sky rocket demand for electric cars and Tesla in particular as they begin building their German manufacturing plant. While the UK isn’t in the EU anymore, I would image that they would still receive German built Teslas to decrease cost. There is also the factory they are building in China that signifies in increase in demand, or at least investing in potential demand. This may be seen as risky to Tesla bears, but Tesla’s entire business was initially based on risk. Nobody knew if electric cars were going to be the future until we saw how amazing the Model S was and then they just keep getting better.

Model S Was The Beginning of History

The Model S was the beginning of its kind. There were other cars around like the Fisker Karma, which Justin Bieber had an entirely chrome one which was pretty absurd. Three things that were so revolutionary for the Model S were the stupid fast acceleration, the ability to charge your car over night and never buy gas again, and the futuristic technology that released with it like autopilot. The Fisker Karma had a massive iPad-like screen similar to the one featured in the Model S but something about the Model S was just better. Since then, Fisker Automotive sort of died off and is no longer a brand. They are continued by Fisker Inc that is set to launch a range of electric vehicles in 2021. Just as Tesla gets their groove.

The Future for Tesla

The future for Tesla is still sort of blurry. The current valuation of the company feels almost fantasy like with the magnitude of the growth. No other company has grown in this fashion other than maybe Amazon, which is currently valued just shy of $2,000 per share. ARK Investments believes that Tesla will shoot all the way to $7,000 per share which just sounds absolutely absurd, but there is only one way to find out and that is by waiting. Here’s to the future of Tesla.

Tesla understands that it must be a tech company to remain relevant. Now Volkswagen understands it too. Other carmakers should understand this too, so they may remain competitive in the next 7-10 years. Watch this video from Torque News editor Armen Hareyan and click to subscribe to Torque News Youtube channel for daily automotive news analysis.

Tsingshan's Threat to Tesla: EV Maker Is In Battery Crosshairs
Tesla-Funded Research Reveals One of The Biggest Mysteries of EV Battery
END_OF_DOCUMENT_TOKEN_TO_BE_REPLACED