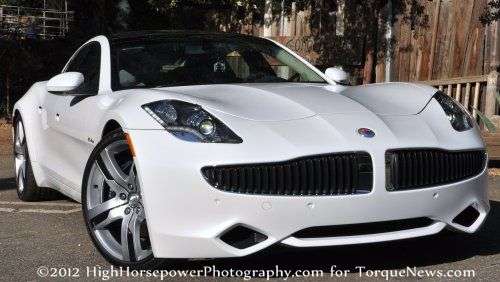 Since I first laid eyes on the Fisker Karma at the 2008 Detroit Auto Show, I have been enamored with the high performance electric luxury sedan with extended range capabilities and earlier this week, I was among the first journalists to drive the production ready Fisker Karma on US soil – a drive that met every expectation that I have had for the sleek new sedan over the past 4 years.
Advertisement

For those of you who are unfamiliar with the Fisker Karma or the Fisker brand, here is a little background. The Fisker brand was founded by former BMW and Aston Martin designer Henrik Fisker. The company is based in the good ol’ USA (Anaheim, California to be exact) with the Fisker Karma being produced at Valmet Automotive in Finland but future models including the compact currently referred to as Project Nina will be built at Fisker’s production facility in Delaware.

The Fisker Karma is a premium luxury sedan with a truly unique look inside and out but the most important feature of the new Karma is the electric drivetrain mated to a range extending electric engine. This drivetrain uses a pair of electric motors mounted at the rear wheels fed by a lithium ion battery and a 260 horsepower turbocharged gasoline engine mated to a battery charging generator system to offer a total output of 403 horsepower and a stunning 959lb-ft of torque. The result is an ultra premium luxury electric sedan that can dash from 0-60 in just 6.3 seconds and hit a top speed of 125 miles per hour in sport mode (with the gasoline engine running) while in the pure electric stealth mode the Karma can hit 60 in 7.9 seconds and still reach a top speed of 95mph.

That all sounds good on paper but is it really possible for Fisker to use an electric drivetrain to offer a premium luxury sport sedan that offers as much sport as it does comfort and economy? The very short answer is yes – as the Fisker Karma is a divine combination of high end luxury and modern electric drivetrain technologies.

The new Fisker Karma that I spent the day driving around Beverly Hills, California was clad in the premium EcoChic trimline. The Karma EcoChic has an interior filled strictly with items that didn’t require killing anything. This means that you get premium microfiber EcoSuede throughout the interior that is 100% animal free (being comprised entirely of recycled materials) and wooden trim that was taken out of the California wild fires rather than cutting down living trees. The interior of the Fisker Karma EcoChic is packed full of super plush, premium looking and feeling surfaces – from the dash cap to the steering wheel to the door panels to the comfortable front and rear seats. Ultimately, the EcoChic trimline offers the look and feel that the buyer of a $100k luxury sedan demands without relying on any animal or living trees. On top of this plush interior finish, the Fisker Karma features a premium sound system controlled by a large touchscreen that also holds the controls for the navigation and HVAC system along with offering a look at the charging system of the Karma.

The Fisker Karma is a true 2+2 layout due to the long center console that runs the length of the interior – offering the same levels of comfort for front and rear riders. The shape of the interior presents a cockpit like design for the driver with all of the controls well within reach and the shift buttons (rather than a traditional shifter – since there is no transmission) mounted on the center console right with the cup holders and window switches for easy reach without lifting your arm from the center armrest. The gauges are laid out with two large gauges wrapped in a stainless steel trim piece – with the exact look of the gauges depending on whether the car is in Sport or Stealth mode. (There is an image in the gallery on the right with the gauge cluster displayed in Sport mode). The gauge cluster also features two range meters; one of which that shows how much electric range is left and the other showing the total range of the vehicle including the gasoline-assisted range.

The Fisker Karma EcoChic is certainly unique in the fact that it doesn’t use any living trees or animals but for those who are less concerned with that aspect, the EcoSport model features gobs of real leather appointments. However, whether you pick the animal-free EcoChic or the leather clad EcoSport Karma – there are no shortcomings inside of the Fisker when it comes to being an ultra premium luxury sedan. The Karma has an interior that has a fit and finish that can comfortably be compared to any of the world’s biggest name luxury brands and models.

On the outside, my 2012 Fisker Karma EcoChic test drive car is essentially identical to the other Karma trimlines, including the eye catching exposed solar panel roof and the uniquely massive 22” wheels wrapped in Goodyear tires designed specifically for the Karma. As you can see in the images on the right (click any of the thumbnails to see the Karma for yourself from a variety of angles), the Karma is long and low – with a long hood and fender area, large accentuated wheel flares at all four corners and angular LED headlights and taillights. Aside from the striking shape of the Karma as a whole, the unique front end with the prominent dual grille and double diamond lower fascia present a look that is easily recognizable and sure to help the Karma stand out in a crowd. Honestly, I love the look of the Fisker Karma and while it is unlike many of the vehicles on today’s luxury sedan market – what makes it different makes it awesome.

Now, onto the best part – the drive.

When you climb into the cockpit like driver’s seat of the Fisker Karma, it fires up very much like many other electric vehicles. There is no key hole and ignition but instead, it uses the push button start that first brings the interior of the Karma to life followed by the soft hum from the undercarriage to alert pedestrians that there is an electric car coming. This sound is incredibly unique, presenting a tone similar to the “lightcycles” featured in the 80s classic film Tron but it is unlike anything else on the road today. At this point, the Fisker Karma is ready to drive.

The Fisker Karma does not have a traditional shifter, which makes good sense because it doesn’t have a traditional transmission that needs to be shifted. Instead, there are four buttons on the center console in an angular pattern with P, R, N and D finished in grey. When you first fire up the Karma, the P button is lit in red and when you push the Drive button the luxury sport sedan seamlessly prepares itself to rock and roll.

We pulled the Fisker Karma out of our swanky Beverly Hills hotel and began traversing the area – gradually working our way to the highway. Henrik Fisker wanted his Karma electric sedan to be ideal for someone who is going to enjoy driving but someone who also uses the car for the day to day commute so it was fitting for us to deal with a little Los Angeles traffic to see how the Karma performs in the most frustrating situations. As expected, the electric drivetrain used very little power in the short time we spent creeping through LA highway traffic before getting out into clear roads – and that was when the fun really began.

While dealing with the areas with more traffic and when cruising around Beverly Hills, we kept the car in the pure-electric Stealth mode, during which time the Fisker Karma provided more than enough power to keep up with traffic and allow us to hurriedly dart in and out of lanes as we fought the crowds. Once traffic began to thin out, we remained in Stealth mode as with a fully charged battery and a top speed of 95 miles per hour, there was really no need to use the Sport mode. The Karma’s Stealth mode allows the large sedan to accelerate well enough to pull ahead or away from other vehicles in traffic and it doesn’t take much effort for the Karma to hit that 95mph top speed running on pure electric.

Also, while dealing with the more dense areas of traffic, we were able to try out the Karma’s Hill modes – which help to improve the levels of regenerative breaking and controlling the speed of the car when coasting downhill. Fisker’s Hill assist feature has two modes (aptly named Hill 1 and Hill 2), and these modes simulate the feeling of engine braking. It was described to us as Hill 1 simulates shifting from 5th gear to 4th gear when going down a hill and Hill 2 simulates going from 4th gear to 3rd gear under the same circumstances. We found that when using Hill modes, it feels exactly like changing gears to slow down your vehicle when coasting down a hill and along with controlling your downhill speed, Hill mode also increases the amount of regenerative braking gains.

After spending some time working our way out away from the big city in the Fisker Karma, we got off of the highway and headed to the twisty area backroads to test the handling of the luxury sedan. Even though the Karma is a large sedan with a massive wheelbase, the car was nimble through the canyon roads and it was a great deal of fun to drive. The steering is tight and very responsive, working with the sport tuned suspension to offer the feel of a sports car from this big electric sedan. Also while cruising off the beaten path, we popped the Karma into Sport mode. This engages the 260 horsepower gasoline engine to provide more continuous charge to the lithium ion battery, increasing the top speed to 125 miles per hour and dropping the 0-60 time into the low 6 second range. While the Karma is a fun drive in Stealth mode; having the added performance of the Sport mode really brings the car to life. From a roll or from a dig, the Karma accelerates hard without any wheel spin – making use of all 403hp and 959lb-ft of torque as the car very easily climbs towards the 125mph top speed. Since we were only had so much seat time and none of it was on a closed circuit, we weren’t able to fully test the high performance capabilities of the Fisker Karma but I can comfortably say that the Karma will deliver on every bit of the performance figures stated by the budding automaker.

We have known for a very long time what the new Fisker Karma would look like inside and out when it hit US shores but the true mystery was can the Karma use the electric drivetrain to deliver on the sporty aspect? The answer is a very confident ‘hell yes’.

The new Fisker Karma offers electric-only driving but thanks to a gasoline powered turbocharged there is no risk of range anxiety but more importantly – it offers a true high performance driving experience that is entertaining and engaging. The Karma handles like a dream (especially for a large luxury sedan) and the dual mode electric drivetrain does a fantastic job of combining efficient electric driving and high performance capabilities. Add to all of that the fact that the Karma offers the comforts inside of a premium luxury sedan and a truly unique, sexy look and you have one of the most exciting new luxury offerings in the world.

Check out the gallery on the right above by clicking any of the thumbnails for a closer look at our 2012 Fisker Karma EcoChic test car and stay tuned to TorqueNews for all of your biggest news and automotive reviews!