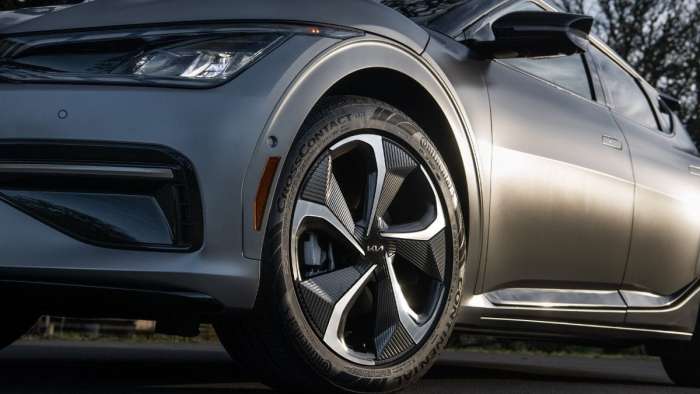 Kia has revealed the pricing of their new EV6 for the U.S. market and the good news is that it has a lower starting MSRP, at $40,900, than almost every other compact EV SUV currently for sale. Only the VW ID.4 and Hyundai Ioniq 5 (when the RWD base model goes on sale) are priced lower than the EV6, and only a tad lower at $40,760 and $39,700 respectively.
Advertisement

But wait you say, the Chevy Bolt EUV, at a starting MSRP of $33,500 is also lower than the EV6! Once the Bolt EUV goes on sale again, for however long that may be (which may not be that long as CNET suggests), it is technically true that it will be priced lower than the EV6, but the EV6 is eligible for a $7,500 tax rebate for anyone purchasing it who has paid at least that much in federal income tax. That actually means that for most buyers, the EV6 actually starts at $100 less than the Chevy Bolt EUV. Way to go Kia!

But wait, you may say again, there are a handful of other compact EV SUVs coming this year which could be lower priced! These would be the Toyota BZ4X ($40,000) and Nissan Ariya ($40,000). To be fair, new start-up offerings may be available too with the Canoo Lifestyle Vehicle ($34,750) and the Fisker Ocean ($37,499) being two examples, though their availability may be slim or spotty, depending on where one lives. There are also more expensive EV SUVs that are to go on sale this year or will continue to be sold, from the likes of Volvo (XC40 Recharge), Mercedes-Benz (EQB) and others. When those vehicles are released, competition will get tougher for Kia. For now though, Ford, Tesla, and Volvo (and technically Hyundai for a few more months) are all selling their compact EV SUVs for thousands more than Kia is. This means the EV6 is one of the best deals going for EVs in this form factor and will be for all of 2022, at least.

But good pricing is one thing, availability is quite another. Tesla should be able to sell significantly more model Ys this year than it did last year, probably far exceeding 200,000 units in the U.S. alone, given their 2021 U.S. sales of 161,529, with the Austin gigafactory now coming online. But the base Model Y costs about $26k more than the base EV6, after tax rebate (of course there are features, like AWD, in the Model Y the base EV6 wouldn’t have, and vice versa). Ford is investing heavily in ramping up Mustang Mach-E production and is likely aiming to make and sell over 100k units in 2022. These are likely to be the two higher volume competitors for Kia in this segment, and I previously predicted that due to high global demand for the EV6, Kia may not be able to offer more than about 60k EV6 units for sale in the U.S. this year, which is still more units than any non-Tesla EV sold in the U.S. last year.

What about the other brands besides Tesla, Ford and Kia? VW should be expanding the volume of ID.4 production and sales, and lowering the price further as well, as it brings U.S. based production online later this year. But VW sold less than 17,000 ID.4s in the U.S. in 2021, and while they are likely to sell more than that in 2022, I doubt it would be enough to fully catch up to Kia. Nissan’s Ariya EV should go on sale for less than Kia’s EV6, according to Green Car Reports, but due to it being less than a full year on offer, production and sales numbers are not likely to challenge Kia’s total sales. Toyota (BZ4X) and partner Subaru (Solterra) are both offering a compact EV SUV in 2022, but again given it won’t be a full production year, not to mention Toyota only recently ramping up its investment in battery supply (while trying to slow adoption of EVs), it will be a year plus before Toyota, or Subaru, could match Kia’s likely sales numbers for the EV6. Hyundai’s Ioniq5, which shares the same platform as the EV6, may sell as much or more than the EV6 though, and if we combined Kia and Hyundai compact EV SUV sales, they could outsell Ford, depending on how fast Ford can ramp up production of its Mach-E. That will be something to watch out for and consider for future articles as more data becomes available. It is unlikely VW, Nissan, Toyota, and others bringing segment competitors to production can catch Kia this year, in my book. But in the coming years, who knows. I’ll have to dive into those scenarios in forthcoming pieces, too.

Earnald Lumbert wrote on April 12, 2022 - 8:58pm Permalink
Errrr. . . Have you heard of the Nissan Leaf? They've evolved since you owned one. Check out the prices on the 2022 versions. Even the fully loaded 200+ mile 200+ horsepower version is less than the EV6 and still qualifies for the federal tax rebate. And Nissan has a lot more history and experience than Kia/Hyundai which is reflect in their reliability.