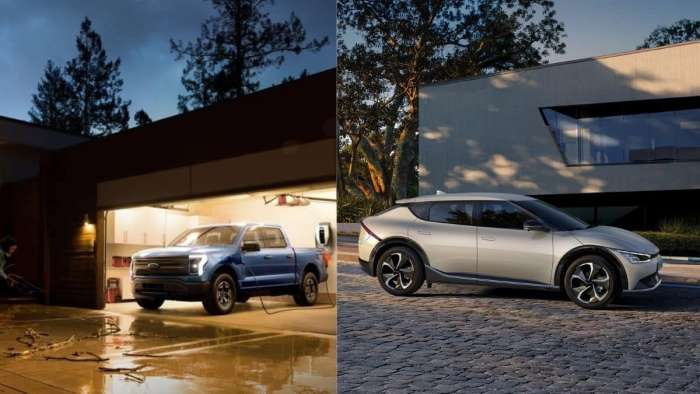 Kia will offer more plug-in vehicle models in the U.S. than Ford for 2022. Ford will offer 3: Mustang Mach-E, F150 Lightning and the Escape PHEV (and technically a 4th, but it is a commercial cargo van and isn’t really a factor in the consumer market). Kia will offer at least 4 models: EV6, Niro EV, Niro PHEV and the Sorento PHEV, but more choices doesn’t mean Kia will sell more units. So which automaker is more likely to take 2nd place in the U.S. market for 2022?
Advertisement

Ford stated, earlier this month, that within two years they intend to become the 2nd largest electric vehicle maker in North America. Ford is starting from a good position as their Mustang Mach-E was the 3rd best selling EV in the U.S. last year with 27,140 units sold according to Car and Driver. Ford is also dramatically increasing production of the Mach-E with plans to reach 200,000 units per year (globally) by 2023 according to The Detroit News. Ford also aims to reach similar annual figures for its F-150 Lighting electric pickup. And though Ford had a few thousand Escape plug-in hybrid sales in the U.S. last year, at the most, and will likely have significantly more in 2022, it is Ford’s EV goals that we should pay closest attention to when judging Ford’s seriousness about competing for 2nd place this year.

Ford aims to challenge the current number 1 player (Tesla) for the lead spot, by 2025 though. Regardless, that goal is very ambitious on Ford’s part, especially considering that at the global level Ford wasn’t even in the top 10 plug-in vehicle sales for 2021, unlike Kia, according to InsideEVs. This is just to say that Ford has its work cut out for it, while Kia may have some advantages over Ford that it could bring to bear in the U.S. market, specifically. Ford will hit its cap this year on the current federal tax incentive which means if they don’t lower their prices accordingly, Kia is going to benefit from an even greater price advantage over Ford than it already does; advantage Kia. This may be one reason, according to InsideEVs, why Ford has announced they will consider withholding allotments of the F-150 Lightning from dealers that add markups to their vehicles. Certainly, Kia is not immune to dealer markups as I and many others I have talked to on social media have experienced in the recent purchases of Kia plug-in vehicles, however the markups people are reporting on Ford vehicles are much higher (for example, $30,000 was mentioned in the InsideEVs piece), another slight advantage for Kia.

Let’s wrap up this comparison by looking at the models on offer in 2022 and their prices. As I mentioned in a previous article, I think Kia will manage to sell tens of thousands of EV6s in the U.S. this year, but they have a very strong global demand for it so I think they may have an upper cap of about 60,000 units in the U.S. for 2022 (and I suspect they will sell fewer than that in order to better meet demand in other markets too). The Niro EV and PHEV are likely to sell in higher numbers for 2022 as well, due to a pending model refresh that will be slightly more efficient, while also being larger and more visually striking. Sales of the Sorento PHEV should also increase significantly this year, and these three other models combined should push Kia’s total U.S. plug-in sales for 2022 closer to 100,000, if not over. Ford can certainly beat that figure if they do everything they say, above. Mach-E sales for 2022 alone could beat Kia’s total plug-in sales if Ford achieves its goals and Kia doesn’t greatly exceed my estimates for their toal 2022 sales. The pricing and availability of the vehicles will play a major role in determining which automaker will sell more, of course. With the Mach-E going for just under $44k up to $62k MSRP (before any options, taxes and fees, or dealer markups) vs the Kia EV6 which has been estimated to sell for between $45k and $55k MSRP according to Car and Driver, Kia seems to have at least some advantage in the higher end trim ranges. Note too that the EV6 will charge faster than the Mach-E and in highest trims has more power on tap, too. But Kia also offers a more affordable EV in the Niro, which starts just under $40k MSRP. All new EVs in the U.S. (except those from GM and Tesla) are eligible for a $7,500 federal tax incentive of course, and in some states thousands more in incentives as well. Ford offers one PHEV, the Escape, starting at $33.5k and eligible for over $6.8k in federal tax incentive. Kia offers at least two PHEVs for 2022, the Niro starting at about $25.6k which is also eligible for over $4.5k in federal tax incentive, and the Sorento PHEV starting at about $45.2k MSRP and eligible for almost $6.6k federal tax incentive.

While the pricing and model selection, EV6 charging speed and top spec performance, and possibly the longer availability of the full federal tax incentive are advantages for Kia, I predict Ford is going to sell more plug-in vehicles in the U.S. in 2022 than Kia because of Ford’s production targets and the very strong demand for the Mach-E so far, not to mention Ford’s forthcoming F-150 Lightning. Finally, I should add that any economic or production catastrophes, worsening problems with the global supply chain, or other serious issues could certainly change everything. Whether or not I am right, it will be an interesting race to watch, month over month, as the data rolls in. What do you think?

Images provided by Kia and Ford.