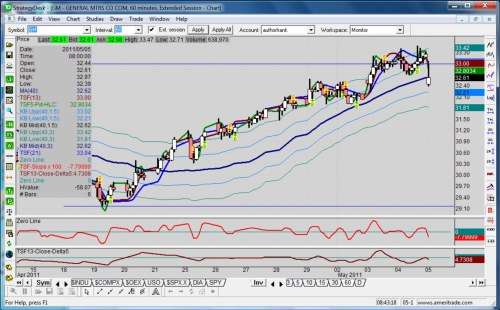 The hourly Chart of GM stock (NYSE: GM) in pre-market trading implied the stock would go lower on Cinco de Mayo; and it did.

Like a Phoenix, though, GM stock started rising on Cinco de Mayo from its pre-market opening trade, but fell back again. Looking again at this hourly chart from this morning GM was trading at 32.61. Question was, how would GM stock perform the rest of the day? The answer at the end of the day's trading was even lower at 32.03 by the close.

According to the GM media release

GM also reported a revenue increase of $4.7 billion to $36.2 billion, compared with the first quarter of 2010.

So, it may be surprising to some that pre-market trading would kick the stock down. Perhaps it’s selling on the news, because it certainly has been trading up on the rumors.

“We are on plan,” said Dan Akerson, chairman and CEO. “GM has delivered five consecutive profitable quarters, thanks to strong customer demand for our new fuel-efficient vehicles and a competitive cost structure that allows us to leverage our strong brands around the world and focus on driving profitable automotive growth.”

Earnings before interest and tax (EBIT) were $3.5 billion. EBIT adjusted to exclude special items was $2.0 billion compared with $1.7 billion in the first quarter of 2010.

GM South America (GMSA) reported EBIT of $0.1 billion, down $0.2 billion from the first quarter of 2010. There were no adjustments in either period.

GM expects that full-year 2011 EBIT-adjusted results will show solid improvement over 2010. GM continues to expect no material impact on full-year results from the Japan crisis.

For the quarter, automotive cash flow from operating activities was $(0.6) billion and automotive free cash flow was $(1.9) billion. Both figures include the $2.5 billion cash impact of GM’s decision, announced in October 2010, to end a wholesale advance agreement with Ally Financial.

GM ended the quarter with very strong total liquidity of $36.5 billion. Automotive cash and marketable securities, including Canadian Health Care Trust restricted cash, was $30.6 billion compared with $27.6 billion at the end of the fourth quarter of 2010.

“GM has great potential to deliver profitable growth around the world as the recovery continues,” said Dan Ammann, senior vice president and CFO. “While we’re encouraged, we keenly recognize we have more opportunities to leverage our scale, improve spending and investment efficiencies, and optimize our strong balance sheet.”

Nobody ever knows where a stock will ultimately trade. However, fundamental news like this at least gives credence to the upward move of GM stock since its low of 29.17. Question is, will GM stock rise high enough for the US government to turn a profit on its investment on behalf of taxpayers?

Disclosure: Frank Sherosky, creator of the chart and author of "Awaken Your Speculator Mind" does not hold any stock, option or futures position in this equity or futures at this time.

Toyota's First EV Will Have a Name of BZ: Toyota BZ
First Videos From Inside The Boring Company's Las Vegas Loop
END_OF_DOCUMENT_TOKEN_TO_BE_REPLACED