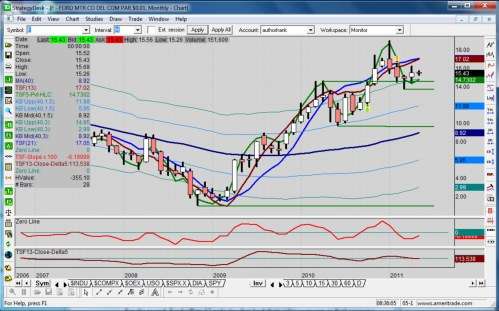 Despite an April sales report that showed an increase of 16 percent versus a year ago and year-to-date sales up 16 percent, investors did not pump Ford stock, even in after-hours trading. Pre-market trading is no different.
Advertisement

The monthly chart shows the macro view of Ford stock (NYSE: F) performance. Note the support and resistance lines drawn in green; meaning, F is trading in the middle.

For the record, the monthly data in this trader's system beyond this chart only goes back to the year 2000, when Ford traded at a high of 32.75 in April of that year, the height of the tech bubble.

Yet, while the fundamentals for Ford look good compared to troughs of years since that time, there are rumblings on the horizon, which may affect Ford stock, like $4-plus gasoline. But Ford doesn’t seem bothered, at least in the press.

“With gasoline prices eclipsing $3.90 a gallon, consumers are placing an even higher priority on fuel efficiency in every size and kind of vehicle,” said Ken Czubay, Ford vice president, U.S. Marketing, Sales and Service. “Ford’s plan to lead in fuel efficiency is saving our customers money at the pump and helping us to profitably grow our business.”

Also for the record, Ford offers 12 vehicles that lead their sales segments in fuel economy, including four vehicles with EPA certified 40 mpg or higher ratings – a claim no other full-line automaker can match.

Problem is, all automakers come short of 40 mpg for the city driving. That’s why their numbers always refer to highway driving, where efficiency is highest. To compete with the 40 miles per day criteria established by the EPA for plug-in electric vehicles, the industry is still behind the needs of consumers.

Think about it. At 40 mpg and a 40-mile per day average, and using $4.25 per gallon times 30 days, that totals to $170 per month, not counting cost of the car financing and insurance. Not to pick on Ford, but all automakers come short of the glory of their press rants.

On the Stock Technical Note

Investors vote with their money. Ford stock has traded up to a new high of 18.97 this year from the late 2008 low of 1.01. Tuesday’s close was 15.38 with significant price support at the 40-day moving average of 14.94 and the monthly swing low of 13.75. Point is, investors show by their stock purchases how much they believe in Ford’s ability to grow future profits.

According to Ford media release, April total sales were 189,778, up 16 percent. Retail sales were up 10 percent and fleet sales were up 31 percent (commercial was up 33 percent, government grew 10 percent, and daily rental increased 39 percent).

Wait, there’s more. Year-to-date, total sales were 686,498, up 16 percent. Retail sales were up 17 percent and fleet sales were up 14 percent (commercial was up 33 percent, government grew 11 percent, and daily rental increased 2 percent).

Continuing a trend seen in the first quarter, the largest increase in retail sales for the Ford brand was in California, where the new Fiesta, Focus and Explorer are helping Ford to attract new customers. In April, Ford brand retail sales were up 34 percent in California and up 37 percent year-to-date.

“Customers are rewarding us for delivering the vehicles people truly want and value – with the technologies they want and fuel-economy they need,” said Ken Czubay, Ford vice president, U.S. Marketing, Sales and Service. “This is good news for our customers, Ford dealers and our business.”

Ford dealers have two all-new small cars in their showrooms that are resonating with consumers. For the second month in a row, sales for Ford’s new Fiesta eclipsed 9,000. The all-new 2012 Focus also is selling briskly. Focus sales totaled 17,265, up 22 percent versus a year ago.

Fusion set a new April record with sales of 21,189, up 12 percent versus a year ago.
The Ford Mustang (up 59 percent) and Lincoln MKZ (up 40 percent) also posted higher sales than a year ago.

Sales of Ford’s utility vehicles were paced by the all-new Ford Explorer, which had its best April since 2006.

Explorer sales totaled 12,593, up 138 percent and, for the fourth straight month, Explorer continues to be the fastest-turning vehicle in the Ford showroom.

The Escape set a new April sales record with sales of 21,240, up 11 percent versus a year ago. Sales of the new Ford Edge (up 4 percent) and Lincoln MKX (up 16 percent) also were higher.

“The EcoBoost engine is the right engine for the right time,” said Czubay. “It provides the industry’s only ‘no compromise’ solution, delivering both the capability and fuel efficiency truck buyers really want.”

Back to Stock Performance

Aside from the stock fundamentals. Ford stock (NYSE: F) has been languishing lately for a reason. And, with all respect to Ford’s technology gains these past few years, the EcoBoost engine technology with all its increase in efficiency is still no match for $4-plus gasoline and a high unemployment rate. And neither is GM, Toyota, Honda and Hyundai’s engine technology to name a few.

Why GM stock is doing better is anyone’s guess, but its position in China is a heavy factor. That’s why Ford, as part of its aggressive growth plans in China, will double the size of its professional workforce here by 2015, adding 1,200 new jobs. They are behind GM in this area.

Perhaps investors are realizing the situation with Ford and are simply unwilling pay up for the stock at this time.

For the record, Jim Cramer of CNBC’s Mad Money held a segment of his program at Ford in Dearborn just last summer. His respect for Ford led byAlan Mulally was clear.

Problem is, gas mileage in the eyes of automakers is not the same as viewed from the standpoint of the consumer. It’s not just gasoline; it’s the cost of these high-tech cars, in addition to high gasoline costs, in addition to maintenance and insurance that kills everyone‘s pocketbooks.

Question is, does Mulally have the vision and the chutzpah to direct Ford to invest in the next phase of IC engine development? For sure, electrification is far from cost effective despite all the government intervention and tax-break coaxing.

I have yet to hear Ford say anything about natural-gas for cars or admit to meeting the next level of efficiency or meeting 50-plus mpg.

If Henry was here, you better believe he’d be tinkering with split-cycle air hybrid engines alongside the Scuderi Group, and the external combustion steam engine alongside Cyclone Power.