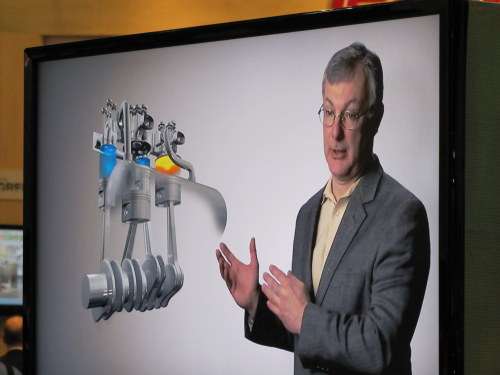 In a private interview with TorqueNews.com at SAE 2011 World Congress in Detroit, Sal Scuderi, President of the Scuderi Group, answered a pointed question about the potential of ever achieving 50-plus mpg using the split-cycle, hybrid engine with a turbo charger.
Advertisement

As a reporter, I half expected a delay in Scuderi’s answer, while he carefully mulled over what to say. However, Mr. Scuderi was rather quick in his response, implying full confidence. He did not say might be, but "Yes." Amazing how one year of development time and some evolutionary changes can rearrange things.

Do you realize what this means? Despite the technological gains of EVs, lithium-ion batteries and regenerative braking, the internal combustion engine or ICE is far from dead. Hopefully the major OEMs come to the same conclusion with the new 2016 government mandates approaching. After all, gasoline is still the most energy-dense fuel that is readily available. We just need to burn it more efficiently and use less of it; and now we have a technology that can bring that reality to fruition; even as we consider switching to natural gas.

Fact is, the basic Scuderi split-cycle engine is by itself revolutionary when compared to today’s Otto cycle engines, even when used with alternate fuels, even when modified with turbos, variable valve and variable cam timing, direct injection; and even when compared to other modified engine designs which use the Rankine cycle and partial-Miller effect cycle, whereby 15-20 percent of the parasitic drag of the compression cycle is reduced.

For the record, the split cycle engine literally divides the 4-cycle engine process into two distinct halves. Instead of a single cylinder handling all four events, the intake and compression are dedicated to one cylinder, while the power and exhaust are dedicated to another cylinder. Furthermore, it allows firing after top dead center (ATDC) which allows air expansion to do work even before firing.

Now, while we always thought there had to be dedicated pair of cylinders, it appears new developments using turbo charging and a modified Miller effect enables the cold-side, intake-compression, to be literally downsized or reduced in numbers. Think of a four cylinder engine with three power cylinders and only one intake-compression cylinder feeding the other three. Furthermore, it performs with a torque curve of a diesel while reducing fuel consumption.

Within its own press release earlier in the week, the company officially stated it found when the Miller cycle was applied to its split-cycle engine design, the brake specific fuel consumption (BSFC) decreases by 14 percent while power increases by 140 percent.

The air hybrid tank, an evolutionary development from the engine’s V configuration, obviously enhances that reality. It further avails the capture of lost energy from driving through regenerative braking, no less than a hybrid-electric car with or without a super capacitor, or the hydraulic-hybrid technology being studied by Fiat-Chrysler for vans and trucks.

It appears it is the very nature of the split-cycle arrangement to enable further evolutionary developments, such as making the Miller effect become truly complementary in its ability to achieve more gains from the Miller cycle than perhaps Miller ever imagined. Here is the direct link to the Scuderi website showing that process: Scuderi-Miller a perfect match

Better yet, here is the latest link update on 4/18 from Scuderi:

Another advantage of the Scuderi split cycle engine is its scalability from cars to trucks, combined with its adaptability to be used with a range of alternate fuels, including natural gas and diesel.

Again, while the experimental ATAC engine technology of FEV allows a CNG engine to run with the efficiency of a diesel by using a piston design to enhance swirl, and while GM’s HCCI technology enables diesel efficiency on gasoline, so does the Scuderi engine.

In fact, the split cycle engine of Scuderi already allows the swirl needed to get full atomization due to the sonic velocity of the incoming air to the power cylinder. The design also enables a diesel to pump fuel at much lower fuel injection pressures. In other words, the velocity for full atomization of the fuel at high pressure is being achieve via the air inlet, not the injected fuel.

Be apprised that any year’s SAE World Congress is never as large as the NAIAS or even an Autorama for that matter, but its content is never less significant; and this year’s presence of Scuderi reinforces that opinion.

After 39 years in the auto industry, my perspective is unique compared to many auto writers; not always better, just different. So, I prepared a video from my home office which is my personal reflection on the interview with Sal Scuderi, and the achievements the company has made thus far.

Again, I still have plenty of pics and video interviews to share which will be released as the days and weeks go by. So be sure to stay tuned to TorqueNews.

Frank Sherosky wrote on April 18, 2011 - 4:47pm Permalink
Recent update of Scuderi video by permission.
pfb wrote on April 18, 2011 - 7:15pm Permalink
Excellent article on the latest advancements of the Scuderi Technology. Frank Sherosky appears to be in awe about the ramifications of this technology to the auto industry. Let's not forget about several other industries (marine, generators, trucks, farm equipment) among a few, who will greatly benefit, from the use of this technology. There have been many skeptics of this technology in the past however, most of them are fading away and the Scuderi Group is still standing. They could be on my team anyday!! Paul "the wrestler" signing off.
John wrote on May 11, 2011 - 7:53pm Permalink
The results of their computer model of the engine use in a Nissan Sentra says there was a fuel consumption reduction of about 35% over the current engine in the Sentra. The Sentra has a 140 hp engine and gets 24 mpg city and 31 mpg highway. That means a Scuderi turbo air hybrid engine of similar power ( I assume) would get about 36 mpg city and 47 mpg highway. It would be like having $3/gal gas again.
Anonymous wrote on May 11, 2011 - 8:26pm Permalink
John I could be wrong but I don't believe that is correct. I think the Nissan Study did not include the Miller effect turbo charging and possibly did not include the air-hybrid portion either. I was unable, from their article, to ascertain exactly ( Scuderi engine wise) what was being compared. But if you know otherwise, Please correct me. J~
Anonymous wrote on May 11, 2011 - 10:58pm Permalink
I guess I am guilty of reading too fast. "The most favorable results were obtained using a preliminary model of the turbocharged SSC engine with a downsized compression cylinder configured to operate in air-hybrid modes." J~