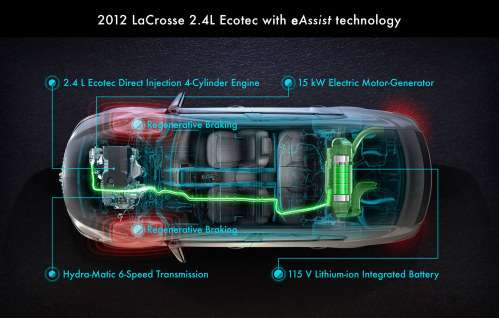 The public is aware the new 2012 Buick LaCrosse with eAssist™ is a luxury sedan that comfortably seats five adults, but few realize it will deliver highway fuel economy on par with compacts like the Mini Cooper.
Advertisement

Surely, as gas prices go up, so does purchase consideration for more fuel-efficient cars.

LaCrosse with eAssist, which goes on sale this summer, uses a variety of technological advances and body enhancements to deliver estimated segment-leading fuel economy of 37 mpg on the highway and 25 mpg in city driving without sacrificing passenger comfort. The fuel economy ratings are still awaiting EPA certification.

According the latest GM news release, not only is the luxury sedan expected to be more fuel efficient than competitors like the Acura TL, Lexus ES350 and Lincoln MKS, it also expects to beat smaller hybrids, including the Lincoln MKZ Hybrid, Toyota Camry Hybrid and Lexus HS Hybrid on the highway, while offering more rear leg room than any of them.

For the record, LaCrosse is the first in its segment with a four-cylinder, six-speed powertrain; the first with HiPer Strut suspension for improved ride and handling; and now has the new standard eAssist technology.

The eAssist system is a lighter form of electrification to the automobile. Using a state-of-the-art 115V lithium-ion battery system and latest-generation 15-kW electric motor-generator, regenerative braking takes place anytime the driver is off the throttle.

Regenerative braking in this case provides up to 15 kW of electricity to charge the battery to power all of the vehicle’s electrical systems with recaptured energy instead of fuel; and that dramatically reduces the need to load the engine with the generator.

The system uses power stored in the battery to provide 15 hp of electric power assistance in various driving scenarios, delivering more than three times the power provided by the previous-generation belt-alternator-starter system.

“LaCrosse with eAssist is the smart choice for those who want great fuel economy and performance in a luxury vehicle,” said Tony DiSalle, U.S. vice president, Buick marketing. “LaCrosse with eAssist is an excellent value, costing thousands less than competitors with similar technologies, and its fuel-efficient powertrain comes standard on four-cylinder-equipped models.”

Steve Poulos, global chief engineer of the eAssist system said, “The additional 15 hp provided by electric assist allowed us to lower LaCrosse’s gear ratio without sacrificing reserve acceleration and performance. For example, when climbing the grade of an overpass, a normal vehicle will downshift and lose some fuel efficiency, but LaCrosse with eAssist maintains gear for improved performance and increased efficiency.”

eAssist also enables LaCrosse’s Ecotec engine to shut down fuel delivery in certain deceleration conditions, which saves additional fuel. While in fuel shut-off mode, the motor-generator unit continues spinning along with the engine to provide immediate and smooth take-off power when the driver presses on the accelerator. Then, as the vehicle comes to a stop, the motor-generator unit spins the engine, bringing it to a smooth stop – properly positioned for a smooth restart.

“All Buick automatics do some deceleration fuel cutoff when the driver is not on the accelerator,” said Daryl Wilson, LaCrosse lead development engineer. “But eAssist allowed us to take the decel fuel cutoff all the way down to zero speed, which resulted in a significant fuel economy increase.”

Other design improvements go beyond eAssist, too. For example, program engineers also improved LaCrosse’s underbody aerodynamics by strategically placing underbody aero panels. Even the tires were optimized for performance and fuel economy, and electronically controlled shutters in the lower grille close at higher speeds to push more air over the vehicle, which increases aerodynamic efficiency to enhance fuel economy and engine warm-up.

All of these technologies increase the effectiveness of the eAssist system’s regenerative braking capability, while also improving the vehicle’s efficiency while driving.

LaCrosse with eAssist includes an ECO gauge on the instrument panel that continuously responds to driving behavior, helping the driver attain maximum efficiency. It also features a hill-assist system that captures brake pressure to help the driver more comfortably accelerate from a stop on a moderate or steep grade. It does this by greatly reducing the tendency of the vehicle to roll backward with the engine in shut-down mode.

“All of these improvements deliver significant fuel-efficiency gains Buick customers will appreciate,” DiSalle said. “With eAssist, Buick customers don’t have to trade a premium driving experience for efficiency.”

The eAssist system also comes to Buick Regal in late 2011. And we can only hope its success makes its way into other GM product lines.