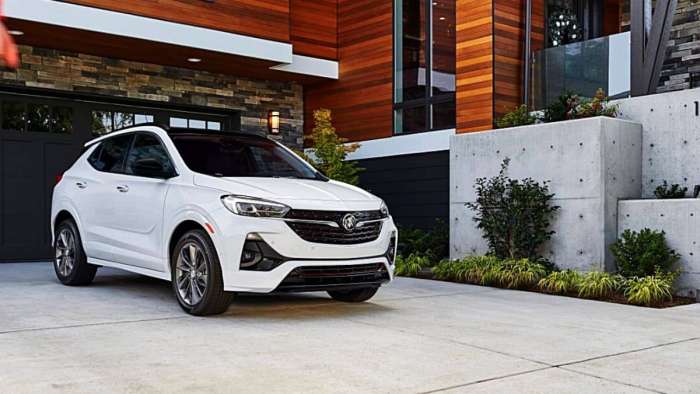 Although Buick Encore GX sounds like one of the trims of the Encore SUV, it is actually a separate car, which was introduced at the Los Angeles Auto Show in November 2019, and made its debut in early 2020 for the 2020 model year. This week Torque News is reviewing the 2022 Encore GX Essence trim, which sits between the smaller Buick Encore and the midsize Buick Envision.
Advertisement

Keep in mind, the GX doesn't replace the Buick Encore. The 2022 Buick Encore GX is offered in Preferred, Select and Essence trims. This SUV allows seating for up to five people and is available in both FWD and AWD options. In fact, the Buick Encore GX has some great 5 features that set this vehicle aside.

Here are the prices of each trim in the United States.

If I were to describe what is special about the 2022 Buick Encore GX, I would say this. The Encore GX is generally at the larger and more luxurious end of the extra-small SUV segment. There is plenty of available technology in this crossover and good amount of safety features. The interior is upscale, compared to many other SUVs. The interior and cargo space benefit from the vehicle's large space, which is larger than average size for the class. 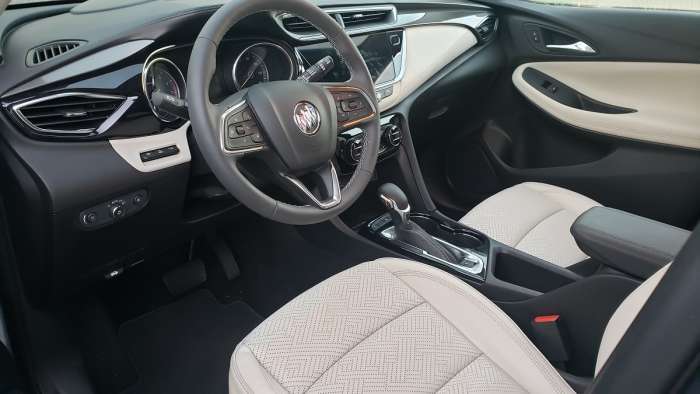 Like I mentioned above, this compact crossover offers space for 5 passengers seated very comfortably. In Buick's line of SUVs, the Encore GX sits somewhere between the Encore and the Buick Envision midsize SUV.

The Encore GX we tested was the Essence and like the previous year's model, this one did not disappoint, it is still a stylish crossover and a lot of fun to drive, especially around town.

The 1.3-liter Turbo engine delivers 155 horsepower at 5600 RPM per minute and 174 pound-feet of torque at 1600 rpm. This engine works in conjunction with a continuously variable transmission or CVT.

Exterior of the 2022 Buick Encore GX

Regarding the exterior, there are no visible changes in this Encore GX 2022 compared to 2021. It still has better proportions than the standard Encore, something that makes it look better from any angle you look at it. 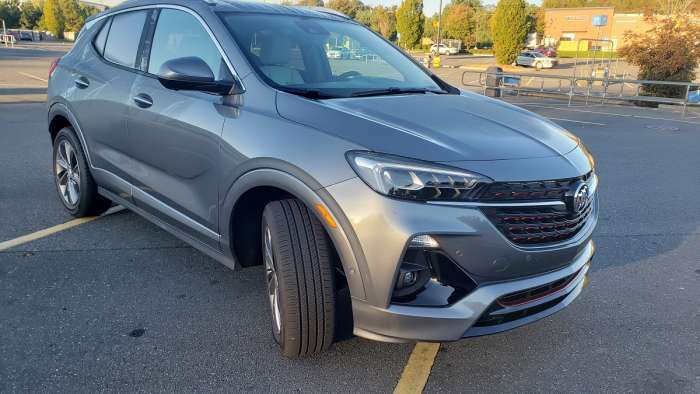 This new Encore GX 2022 continues with the DNA of the Encore, but like the 2020-2021 models it is much more refined and with a front, which I find very impressive.

With the optional Sport Touring package, it includes the characteristic Buick grille but in black with red accents and 18-inch aluminum wheels, which by the way looks great on it.

Through the optional Liftgate package, it also features the electrical system for hands-free tailgate opening.

Interior of the 2022 Buick Encore GX

The interior also does not present changes from the previous year model. Yet, the 2022 Encore GX is still an elegant crossover, although with a little extra plastic, especially in the space of the second row of seats, something that does not catch my attention and that perhaps could have been replaced with another material of higher quality and better view.

The interior space is enough for 5 people to travel comfortably, even on long trips. The second row of seats has very good knee room, especially for large people.

Cargo space like the 2020 model is 23.5 cubic feet, which extends to 50.20 cubic feet with the second-row seats (40/60) folded down. In addition, the passenger seat folds completely like the rear seats, which increases the cargo space for long items, which exceed the length of the extended cargo space (rear seats folded). 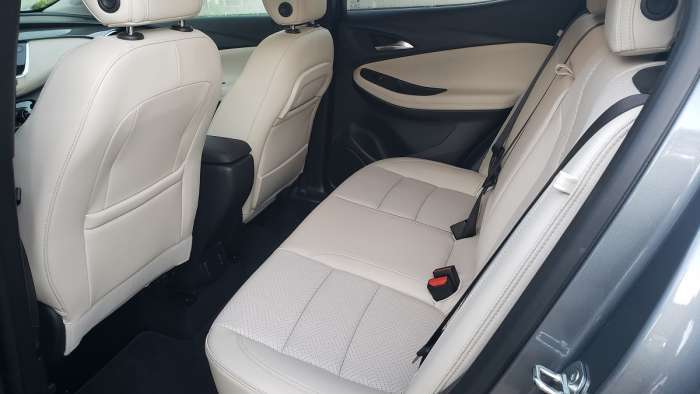 The materials used in the interior are generally good (except for the overuse of plastics), making this compact crossover a vehicle that is pleasant to the touch and to the eye.

Like the steering wheel, the seats on the 2022 Encore GX Essence we tested are also upholstered in leather and include heating.

The instrumentation is fairly classic, but everything is well presented and efficient. The infotainment system consists of an 8-inch touchscreen that is very accessible and very easy to understand. Connected to your smartphone, it's even more interesting. The air conditioning controls are placed just below, the layout is classic but very efficient. We find just below a practical storage compartment where a USB connection and a 12-volt outlet are hidden, I really liked their blue lighting in the evening which makes it easy to connect.

In short, if the Buick Encore GX treats its front passengers well, it is a little less the case in the rear. Space is reduced there, especially if the front passengers are comfortable; the access is not easy because of the narrowness of the doors and the conveniences which are not legion. We understand that the Buick Encore is primarily aimed at couples looking for a small SUV packed with equipment rather than families wanting an ultra versatile vehicle.

Despite this observation, the Encore GX is recovering on the side of the cargo space with 665 liters of volume with the back of the seats raised, which compares favorably to what its competitors offer. It's quite astonishing considering the design of the vehicle.

The small 1.3-liter 3-cylinder has a lot to do when you decide to accelerate after reaching cruising speed, but I appreciated its nervousness in urban areas. The 9-speed automatic gearbox works really well to extract all the power from the engine, and its management is impeccable, which saves the mechanics.

I think we would have been better served with a choice of 3 and 4 cylinder engines; slightly more powerful mechanics would have given the vehicle additional arguments. I always wonder about the current mechanical choices. 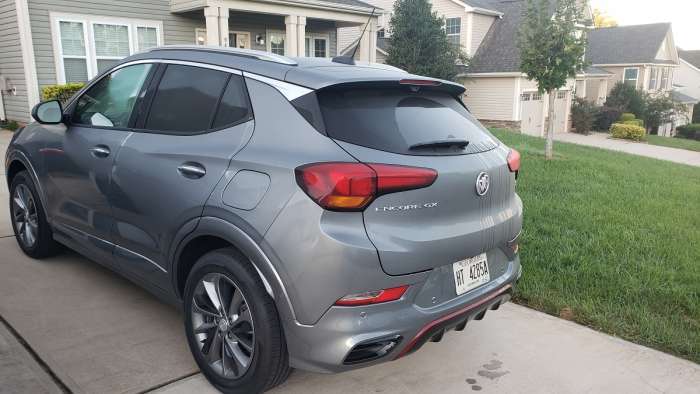 The Buick Encore GX offers a fairly engaging drive, especially due to a fairly low driving position and good handling of the steering wheel. It behaves a lot like a raised car. I also liked the position of the armrest.

The Buick Encore GX is, in practice, alone in its class, few other subcompact SUVs compare to it in terms of luxury, except perhaps the Mazda CX-30. Its strengths are the interior and connectivity functions, much more than its performance. Since this is a new vehicle, we recommend that you wait before purchasing it.

It's a vehicle that's sure to turn heads in its path and has something to appeal to everyone on an aesthetic level. It is functional. economical at the pump and has an excellent safety rating. Its technologies make it particularly pleasant to use on a daily basis.

The 2021 Buick Encore GX has dozens of qualities, but if there is one element that sets it apart from the competition, it's its excellent value for money. There is no other vehicle on the market that offers you so much in this price range. I wouldn't be surprised if the Buick Encore GX finishes in the top of its class in sales for 2021.

I don't know if Buick will ever be considered the same as Mercedes-Benz, Audi, BMW and all the others, but one thing is certain, if you go for the Encore GX, you won't feel like you have missed something when he saw one of his rivals on the road.

LG's New EV Battery Plant Is a Welcome News for Tesla
Tesla Giga Berlin's New Hurdle: It's Not Only the Gov't, but Now Tesla Itself
END_OF_DOCUMENT_TOKEN_TO_BE_REPLACED