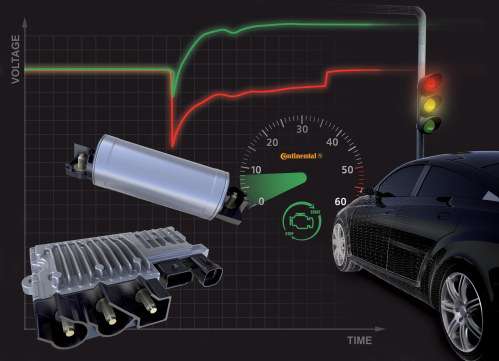 Auto analysts are predicting that stop-start technology, called micro hybrids, will be very common in American automobiles before and after the 2016 government mandates kick in.
Advertisement

Using a newly developed booster module for the on-board electrical system, Continental (provider of the image) has especially laid the groundwork for making vehicle stop-start systems even more convenient and efficient.

The term micro hybrids should not be confused, though, with micro-sized vehicles. It’s all about a less expensive form of drive system without all the hoopla and costs surrounding dual propulsion hybrids like the Prius, the expense of the serial propulsion of the Chevy Volt, and the range limited full EVs like the Nissan Leaf

While some believe Asian markets are likely to gain the most from the technology with their huge congestion patterns, American roads are far more congestive than they used to be. Furthermore, gasoline prices are more likely to rise than go down from here; especially if oil rises due to the dollar falling.

While the adoption of the stop-start technology has been slow in the U.S., that is changing fast, simply due to the 2016 Federal Fuel mandates and the EPA’s push for lower carbon emissions; but wait, there’s more. Although there is no parallel electric drive, the end result is still the same; fuel is saved and emissions are lower.

For the record, stop-start technology is far less costly than dual-propulsion hybrids, costing only $300 to $400 for automakers to add. It functions by shutting down the engine at stoplights, then starting it up again when the driver lifts his foot from the brake to accelerate.

The challenge for automakers has been putting stop-start technology on conventional cars with relatively small 12-volt batteries. When shut down, there is still a great drain to run accessories like air-conditioning.

Media sources in print and on the web are giving stop-start technology a lot of attention. Witness the following articles: The Micro Hybrids are coming; Lux Research Paper; to name a few.

The tendency of the media to equate hybrid with electricity drives them to cover expensive lithium-ion batteries as the preferred means for storing energy. However, there is more than one way to store energy.

The latest innovations by Continental are not alone, as Ioxus shows that an ultra-capacitor with its unique lithium-ion design has great promise for fully electrical systems.

Ultra-capacitors are rechargeable energy storage devices that are used to prolong the lifespan of other energy sources, such as batteries. They are lightweight (weighing one fifth the weight of a comparable battery), and their manufacture and disposal has no detrimental effects to the environment.

Porsche, however, has shown that a mechanical device like a flywheel is also a valid choice. Witness the technology within the Porsche 918 RSR which won Best Concept at the 2011 NAIAS in Detroit.

Further down the technology pike is the split-cycle air-hybrid engine introduced by the Scuderi Group. Fact is, the split-cycle engine automatically lends itself to storing air as one half of each piston pair is already dedicated to the intake and compression cycle of air for combustion.

Well, it’s not always an either/or situation. Each technology has its merits, its cost benefit and its performance benefit. Perhaps it’s their synergies that will work best.

Surely, it will come down to price, as the general public simply cannot afford the higher costs associated with dual-propulsion hybrids and full electrics. So, don’t count short the ultra-caps, the flywheel and air-hybrid technology aspect of the coming micro-hybrid craze.

Tesla Contemplates A New Strategy for China Retail even As Sales Boom
Jay Leno on Elon Musk & EVs: “I Think He Should Get ... Credit"
END_OF_DOCUMENT_TOKEN_TO_BE_REPLACED