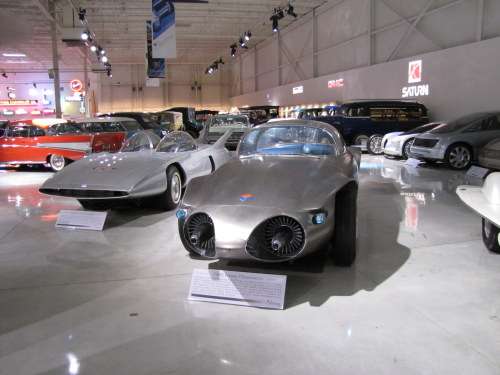 Four alternate engine technologies for 2011 and beyond

With ultra-green ideas on the minds of many legislators that may one day force 60-plus mpg and ultra-low CO2 levels into law, the auto industry best rethink its entire engine technology position for 2011 and beyond. Fact is, there are technologies and concepts just waiting for development and a chance to prove the ICE and other combustion technologies can compete, not only on a fuel mileage basis, but on a cost and an ecological basis as well.
Advertisement

Despite the forward vision of years gone by, as shown by this GM Heritage Center photo, the auto industry in its present state is still behind-the-eight-ball, because energy in the form of oil and gasoline is not getting cheaper or more plentiful.

However, the industry still acts and makes decisions (and indecisions, I might add) as though time is still on their side. The auto industry must rid this time-warped, incremental thinking over quantum thinking, especially with engine development.

That is why various engine technology components, including multiple valves, variable cams, direct fuel injection, turbo charging, super charging, etc. have emerged over long periods of time, segment by segment, when each has been around for many years.

Nonetheless, each technical piece has contributed to the totality of present efficiency, but only in an incremental way; and that is why new engines like the Chevy Cruze still get less than 35 mpg in the city.

Still, the sum total of industry engine efficiency has yet to bring about the quantum leap necessary to meet societal needs and wants for gas mileage and emissions. So, here are four technologies that I believe will help pave the way.

Split Cycle Air Hybrid Engines: While the Japanese have been beating Americans at their own game for decades, by choosing the Atkinson (Miller) cycle engines, they’re now at the point where they, too, are subject to succumbing to incremental approaches; meaning little gains from here on out. In other words, they are climbing the wall of diminishing returns.

Fact is, the only next new thing left for the industry is to split the four cycle engine literally in half. Make the cold side of intake and compression on one half, while the hot side handles the power and exhaust. Companies include the Scuderi Group and the Tour Engine have already done that. Furthermore, the ability to facilitate an air-hybrid is overwhelming.

External Combustion Engines: Remember how efficient steam engines were? Truth is, they still are. Problem is, putting one into a car hasn’t been done in a long time. (Actually, that happened at the beginning of the 20th century.) Nonetheless, we now have the Cyclone Power engine that is compact enough to be integrated into an automobile. It’s also being proven at the Salt Flats in 2011 for a run at the land Speed record.

The advantage the ECE has is its ability to burn any fuel, completely. Lack of a compression cycle means more thorough combustion, which results in less emissions. And the recirculation of the closed steam system makes it portable. This might be a great choice to power that Volt generator, and more so if natural-gas is used.

Laser Spark Plugs: The auto industry has touched just about every conceivable component inside the ICE except for one, the spark plug. It is the one hurdle that keeps the industry from achieving the gains necessary to maximize direct fuel injection and lean burn, because the 100-year old spark plug just can’t cope with stratified charges.

Enter laser technology which can be split from a single power unit. Yet, the industry still attacks the issue in an incremental, band aide fashion, by turning off cylinders. Only Ford has had the vision with its collaboration the University of Liverpool to take on the task. So, regardless of the ICE technology used, this one is still a must do.

Micro Turbines: This is really cool. Imagine a small turbine the size of your forearm that does not thrust the vehicle forward, but powers a generator that drives electric motors, similar to the Chevy Volt propulsion system. Again, fuels of every grade could be used. Jaguar already has one in a concept vehicle that extends driving range over 530 miles.

Point is, the Volt concept is a range extending system; and that's what people want and need, but not at $42K. Still, it needs a cleaner, more efficient drive for the generator to go to the next level. It could be an ECE or a turbine, until the fuel cells come of age.

henry wrote on December 23, 2010 - 2:48am Permalink
Split Cycle Technology is around since late seventies.... eighteen century. Never made its way to the markets. Among the more substantial reasons: 1) Firing after top dead center causes the piston to run faster than the flame front speed and therefore the engine loses efficiency 2)The necessity to prevent cylinder piston dead volume combined with very fast crossover valve cycling. Surprisingly the Tour Engine innovative technology have already demonstrated the ability to overcome those two obstacles. Within few month the company will surprise those of us that long ago gave up the notion that one day a new revolutionary super efficient internal combustion engine will face day light.
In the know wrote on July 24, 2011 - 7:34pm Permalink
Wrong..... Split-cycle engines have been here since about 1875 (Dugald Clerk)....Scuderi and Tour engines are not split-cycle, they are Captive Pulse. Split-cycle engines use ported cylinder walls, captive pulse type engines use overhead valves... totally different engine designs... they probably call them split-cycles to get around the Graves engine design, which is from the early 90's (1990's) None of the new companies pushing split-cycles could even share a stage with Graves, he'd eat their lunches instantly...I know, I've worked for him.
JJ wrote on September 3, 2011 - 7:04pm Permalink
Sirs, What about the engines produced by Graves? I know they had reached thermal efficiencies beyond 80% by 2001 with a two-stroke cycle and overhead valve systems.....They were tested by my employer (at the time) in Central Texas. As far as I can tell the tour and scuderi type engines are completely anticipated by Graves by as much as two decades actually. I've read enough of the claims to know I've seen it all before. I hear the Graves crew is still in the lead. I'll tell you from experience, nobody, and I mean nobody has a chance against Graves. They don't call him the Abyssing Angel by accident. Most of the tour and scuderi claims will simply be null and void in the end. The early Graves engines will be devastating for the split cycle novices to defend against.