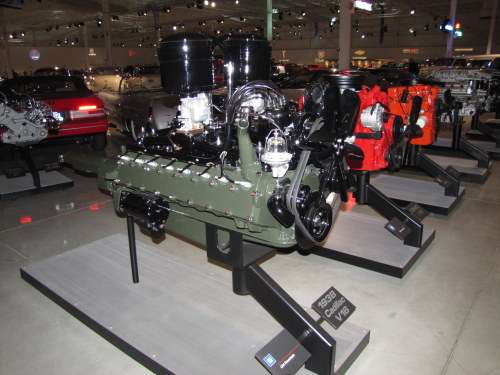 With the exception of the parallel-powered hybrids and the dual-mode Chevy Volt, the auto industry has hampered its own gains in engine efficiency for decades. Reason: Intentional limits placed on its own thinking about what should constitute the internal combustion engine (ICE).
Advertisement

The Cadillac V16 at GM’s Heritage Center in Sterling Heights, Michigan shows the auto industry didn’t always use incremental thinking over quantum thinking, especially with engine development. That is why it’s puzzling that various engine technology components, including multiple valves, variable cams, direct fuel injection, turbo charging, super charging, etc. have emerged so slowly over time, segment by segment. Each has contributed to the totality of present efficiency, but only in an incremental way.

Still, the sum total of engine efficiency today has yet to bring about the quantum leap necessary to meet societal needs and wants for gas mileage and emissions. That has to change! The industry must return to the character of its true heritage, and once cherished - grand technology thinking.

Legislation may one day force the issue by demanding engines get 60 mpg and ultra-low CO2 levels. Yet, despite that possibility and its own drive to expand the electrification of the automobile, the costs of electrification alone for the industry and society will likely keep the ICE around for many years; and the industry deep down knows that. That is why they are not ready to can the ICE just yet, and may once again sit on their hands. Industry analysts know they can do more, but that is both good and bad for the consumer.

On one hand, the industry knows that it is purely poor economics that have bought the ICE a bit more time. That, however, creates a mood whereby the industry only feels, as in the past, it only has to keep up a green image for now by only meeting the mileage ratings of hybrids. In fact, that seems to be the very philosophy behind Nissan’s Green Programme.

For the record, Nissan has chosen a small 3-cylinder engine with a supercharger just to meet CO2 levels and power needs. That engine, though, is slated for Europe, not America, at this time. Likewise, Australia gets a Cruze diesel, but not America.

That means, until full electrification comes about with infrastructure and profit-making margins, the auto industry will only make sub-par gains and offerings out of the internal combustion engine.

Making the best of a situation is not the same as overcoming the situation. It implies a hold-back mentality that we can no longer accept, one that stifles going for the gold medal, so to speak.

As an auto consumer as well as a former design engineer, I think the cost of incremental thinking with engine technology seems to have cost us as customers more money and gasoline than it’s been worth. Autos are certainly not cheaper, while computers are. It’s definitely time for a quantum change for the ICE.

Maybe the ICE cannot compete on the CO2 level as a full EV charged by wind power. It can, however, compete on price, both for the cost of the product and the minimal use of fuel.

GM and a few others may have HCCI (Homogeneous Charge Compression Ignition) technologies in their labs that run like diesels except on gasoline, but they have a very narrow band of efficiency. That’s why some are considering running it dual mode; as a normal engine for acceleration and as an HCCI under highway conditions. Frankly, the normal mode is no better than what we have now, and that’s where the fuel gets wasted.

Likewise, the Chevy Volt should have had a cleaner generator engine, in my opinion; not to mention a natural gas option for it and the Chevy Cruze.

No, let’s go a giant leap forward with ICE. Look again at that Cadillac V16 engine. It was giant leap in its day. Now the auto industry needs to take that giant leap once again, perhaps even splitting the old Otto cycle engine.

Fact is, every engine technology used today is trying to get where this split technology is at this very moment - efficient. The costs and the tooling will be minimal. The auto industry simply needs to let go of its ego and admit that someone else outside of its own backyard has taken the engine development bull by the horns.

voyager wrote on December 23, 2010 - 4:09am Permalink
Good point, although I do think that propulsion is just one subject, 'auto mobility' forming the Bigger Picture. An automotive engineer once told me that except for all the electronics cars haven't changed that much. IMO you can have it all - comfort, safety, flexibility, low operating costs, a fun ride - but hardly in today's automobiles. It's the reason I started my own project. It's called new-isetta.com