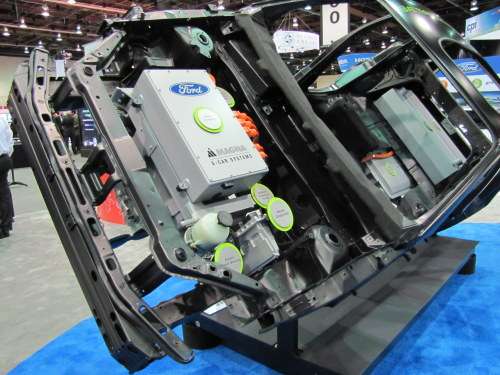 Today, new automotive technologies present the opportunity for enormous gains; the more disruptive the better. Nonetheless, taking a new tech concept from the lab to the marketplace is a risky and time-consuming proposition. Automakers have thus increased their collaborations with universities, research labs, suppliers and start-ups.
Advertisement

Sometimes it takes more than two heads to develop new technologies. In the case of the picture shown at 2010 SAE World Congress in Detroit, collaboration between companies like Ford and Magna was blatant. At one time, that would have been hidden.

The auto industry has three choices: 1) turn to their own internal labs and product development centers; 2) turn to outside academic labs and government-funded research centers; or, 3) turn to existing suppliers or start-up technology incubators.

However, once a material, process or product is proven and it leaves the lab, the next challenge to commercialize it is still major. So, they often turn to start-ups over suppliers in a collaborative effort to grow a new technological development into a viable, commercial product. Small skunk works, unlike suppliers, have the flexibility often missing inside major corporations.

Universities and labs especially like to work with start-ups to commercialize their intellectual property. Take the Scuderi Group, for example. As inventor and developer of the Scuderi Split Cycle engine, they have used a university lab in Texas to help map their engines.

Measuring the performance of start-ups is difficult, though, even for the most experienced analysts. That is why the connection with a university appears to be prudent. Furthermore, as many new companies are formed with the purpose of being merged or acquired, sometimes the best option is to sell the rights or license the intellectual property.

Evaluating a start-up partner is akin to the evaluation of any business behind a stock ticker. In reality, the analysts have a difficult task. Behind the scenes are levels of technologies, maturity of technologies and the marketability of technologies they have to consider as part of their criteria.

Suppliers are already a known quantity, but start-ups are not. So, the goal of the start-up analysts is to separate the potential winners from the long shots. That is where a research firm like Lux Research Inc comes in. Founded in 2004 as a spin-off of venture capital firm, Lux Capital, they literally map the technologies and the start-up companies so the choice for the major companies seeking a collaborative partner becomes an informed decision. They call it the Lux Innovation Grid.

The grid compares technical value with business execution. The grid quadrants compare and rate according to criteria labeled as dominant or high potential on the top; to long shot and undistinguished on the bottom. The rest of the Lux information is copyrighted for which they strictly enforce, but you can view their report in the PDF format on the web by simply registering.

Even ev.sae.org uses them for their article research. For example, according to their latest report about micro-hybrids, Lux Research shows enormous opportunity for the energy storage technologies that support it.

Bottom line is, companies like GM are collaborating with battery companies like A123 Systems, Ford is even collaborating with a university in Scotland to develop a laser to replace the spark plug. Point is, the cooperation between automotive manufacturers, suppliers, start-ups, education and government resources is on the increase; and firms like Lux Research are helping them make the right choice.