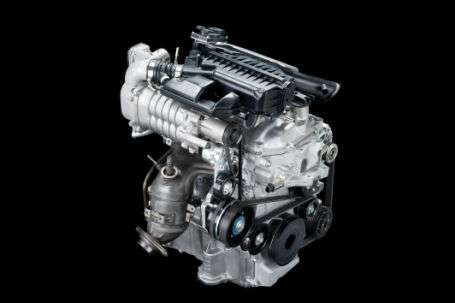 The Nissan Leaf to be introduced for 2011 represents the future, but it is only one part of Nissan's two-pronged vehicle strategy. The other part of the company's plan is “Pure Drive,” aimed at developing vehicles with high-efficiency internal-combustion engines (ICEs), transmissions, and hybrid systems.
Advertisement

The EVs are surely on the rise, but the internal combustion engine (ICE) is not going away anytime soon. Witness Nissan who wants to make better cars, but also wants their cars to produce less CO2, to use less fuel, and to reduce their impact on the environment. So, after they introduced the Pure Drive badge, they created the HR12DDR engine.

All part of Nissan’s Green Programme 2010

Aside from its philosophy that it takes a symbiosis of people, vehicles and nature to sustain a mobile society, Nissan’s Green Programme, first announced in 2006, is an environmental action plan based on three pillars: Reducing CO2 emissions; Protecting the atmosphere, water and soil; and Reducing, reusing and recycling.

Most CO2 is emitted during driving, so Nissan has been developing a clean running hybrid and electric cars to abate those CO2 emissions. They also know that will not happen overnight. So, they're also aiming to make today's cars use fuel more efficiently, with clever engine improvements and by encouraging different ways of driving.

Back to the engine

One of the highlights of the Green Programme was to launch a “three-liter car” by 2010 starting in Japan; a gasoline-fueled car that would run 100km on three liters of fuel. It would also limit CO2 emission levels to at least be comparable to a hybrid vehicle.

Not much has been written about this engine, except for a few article back in July. Missing was the significance beyond CO2 levels. According to web documents, the HR12DDR Engine is a newly developed 3-cylinder 1.2-liter direct injection gasoline engine with supercharger that aims to achieve class-leading low CO2 emissions.

Technology improvements like friction reduction (-30%) and a high compression ratio of 13:1 to improve combustion efficiency, the small-displacement 1.2-liter engine is "downsized and charged" to aim for power on a par with a 1.5-liter engine and only 95g/km CO2 per the New European Driving Cycle (NEDC).

Together that means the ICE is still in play and will remain so for many years. Proof is, it will be offered in the 2011 Micra in Europe. Question is, will it ever come to America?