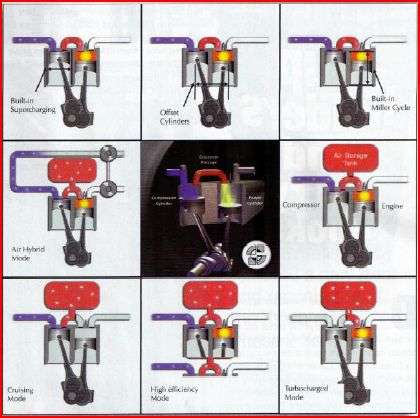 Scuderi, an engine development company, is literally running to the next stage of re-engineering the conventional four-stroke engine, as it will now include a new V-shape configuration. All design efforts to advance fuel efficiency is reflected in its announced filing of new patents, raising it patent portfolio to more than 476 patent applications filed and 154 issued in 50 countries.
Advertisement

Up to this point, Scuderi has been working with an in-line design to mainly develop the combustion process. It was not long ago, though, when they announced success in firing after top dead center, and was well on their way in the process of mapping the engine. However, the in-line design was not the configuration the group intended when it showed its concept of an air-hybrid at SAE World Congress in Detroit last spring. Now enter the Scuderi V.

This new V-shape will also bring the air hybrid to fruition, by allowing Scuderi Group to be more flexible in its own development. The air hybrid, for example, requires access to the air passages, that, in the in-line, were buried inside the head. Think of the V6 or V8 configuration of a standard ICE and you get the picture, especially the manifold area where their air management development will be taking place.

The December 14th news release had the following quote:

“This new engine design enables us to demonstrate the real benefits of having a Scuderi Engine in a vehicle – an engine that can achieve better power, lower emissions and higher fuel-efficiency, all at a competitive cost to produce gasoline-powered vehicles today. The V-shape expands the design possibilities for our engine. We continue to share updates with the OEMs and are confident as additional data is released, the advantages of the Scuderi engine will be fully realized.”

Also check out the latest podcast with Stephen Scuderi that was availed to me via email: Scuderi Podcast 2010-12/14

There are additional benefits achieved by enhancing thermal controls in the crossover passages (Xovr), such as the ability to over boost and maintain consistent thermal efficiencies. For the record, initial tests on the Scuderi V engine are expected to be completed within a year, following the engine map which is anticipated to be finalized in the second quarter of 2011.

Due to the inherent design flexibility of a Scuderi split-cycle engine configured in a V-shape, the engine can be more easily modified as a Scuderi Air-Hybrid. In this configuration, recovered braking energy can then be stored as compressed air to support a range of driving modes and optimize vehicle efficiency.

Finally, Scuderi is in talks with 14 of the top 20 automakers worldwide. So, I say watch this technology in 2011.