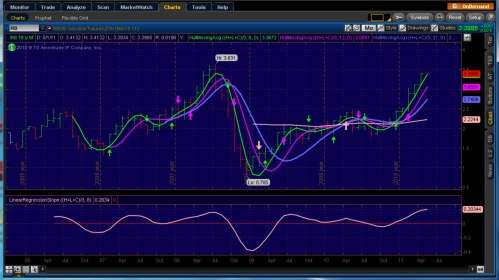 Ask anyone and their threshold of financial pain is already on with the latest prices at the gasoline pump. In Clinton Township, Michigan, drivers are paying $4.23 for credit. So, in light of pain at the pump and a rising futures market, when will the automakers make the next jump to 50 mpg for all cars?
Advertisement

Look at that monthly chart of gasoline futures. And in case you’re wondering, that old $3.63 futures high price occurred in summer of 2008, but does not take into account sales and road taxes. It’s pure gasoline related.

The Easter weekend is surely over, but not the holiday premium at the gas pump; and the effect is not pleasant either, especially for those on low and fixed incomes.

Question is, what aspect of the fundamental supply-demand equation is affecting gasoline prices this time?

I mean, it was just a few weeks ago that I paid $3.89 to fill my Chevy HHR; and this weekend I paid $4.23 per gallon, which means I needed over $50 to fill the tank which was down to 1/8 tank. As an early retiree on a fixed income except for my writing and day trading, I’m not happy either.

And neither are those people driving those big SUVs. Latest reports on the news have these owners forking over $100 to fill their tanks. And my buddy, Ray, informed me this weekend that he will not be taking his motor home on that western trip this year.

So, as an investor and trader, I naturally searched for some answers, solutions, and the real cause for this price gain. After all, America doesn’t even get any oil from Libya; so that’s not it.

How about the Saudis? They may have cut back a bit on production, but not to the degree that would drive gasoline in America to rise 8.7% in just two weeks.

Furthermore, we get most of our oil now from Canadian oil sands. Ahh, there’s the catch. So, that leads one to go to the US dollar and our governments printing of money.

Yes, the dollar has tanked big time, folks. Occasionally there’s a rally, but never with any real distinction. Fact is, the US debt and its inability to curb spending is driving the dollar further down, not up; and the Washington politicians want to raise the debt ceiling yet again. What? So the dollar can fall further in six months simply because we do not have the money to pay our debts except with inflated dollars? And what ever happened to reductions in spending?

Next on the agenda centers on the auto industry itself

In my opinion, it’s responsibility of the auto industry to make cars efficient for their customers, IF they want us to drive their products. They must avail engine efficiency at a cost a McDonald’s or WalMart employee might afford. That should be their new bogie. Fact is, they are far from that.

Take the latest SAE World Congress in Detroit. It seems every automaker is still pandering to electrification to a fault. Very few even mention natural gas as a viable option for cars. Unfortunately, here are no cheap lithium-ion batteries, and the energy density and charging efficiencies are not there yet.

Don’t get me wrong, I like electrified cars, but they are NOT cheap to buy. Even a Prius is well in the mid-$20K. How about a Prius for $16K to make a real difference? Now that’s change we can believe in.

No, we need better than that. We need dual-fuel capability of our engines so we can use natural gas as a backup, which is in great abundance in America. Sure, the infrastructure is not as great as gasoline, but neither are electrical outlets for fast charging.

The real answer, though, can be found in reengineering the internal combustion engine. What a novel idea? Fact is, the automakers, including GM, Ford, Chrysler, Honda, Mercedes, VW and Toyota have reached the limit with present ICE technology. Think about it: All automakers use the same tech ideas like direct injection, variable valve timing to multi-turbos. Point is, it’s not enough. NEXT!

No, what this country needs is an engine that gets 50-plus miles per gallon on average on gasoline. America should expect no less from an industry that prides itself on its ingenuity, its worthiness of bailouts and higher wages compared to everyone else.

You read that right, though. We need 50 mpg right now; and certainly no later than 2013. Problem is, we might not make it that far if prices continue upward. Can you say, risk of double dip recession?

First of all, why did I choose that number, 50 mpg? Well, your government has already established 40 miles as the average range for hybrids like the Chevy Volt. That statistic is sound, by the way, and should be the new minimum for all cars and trucks; but I digress.

So, why can’t we achieve that with gasoline right now? Truth is we can, but not with the engine as it is configured today.

Gasoline is not as evil as many assume. It served us well for over 100 years. We invented it, for crying out loud. And gasoline is by far the most energy dense fuel available, at least for now. So, it behooves the auto industry to take that next step, and take that step immediately. I say go for maximum efficiency by adopting the split-cycle engine technology at once. It’s the only fast solution that is affordable and scalable.

Already, the Scuderi Group which I highlighted at the 2011 SAE World Congress on Detroit last month has embarked on a road to doing just that - revolutionizing the internal combustion engine and engaging the Miller cycle. Furthermore, their split-cycle, air hybrid can use gasoline or natural gas, and can be configured for a diesel. Furthermore, their engine is scalable and capable of functioning as an air hybrid.

Fact is, even Sal Scuderi did not hide from my question at SAE, when I asked him about engine efficiency ever reaching the level where 50-plus mpg would be a reality for all cars. He was in a position to deny that might ever happen, but he did not cower.

I make no apologies for liking this technology. If it was crap, I would say so. Truth is, I can’t see anything else out there right now that comes close. Perhaps the external combustion steam engine of Cyclone Power is a strong contender. Well, let’s develop that one, too. The military and its transport suppliers are certainly considering it..

So, I say, cut the bull, auto industry. Get your act together for a change and do it now. People, your present and future customers, are eagerly awaiting your response, because right now all of us are hurting to pay to use your expensive products. Don’t tell us you can’t do it at a cost we can afford.

Disclosure: Frank Sherosky, creator of the chart and author of "Awaken Your Speculator Mind" does not hold any stock, optionor futures position in this equity or futures at this time.

Anonymous wrote on May 9, 2011 - 7:08am Permalink
So when will this engine come out? When will we see Scuderi go public....what are we waiting for?
Joe Hester wrote on December 25, 2011 - 10:36pm Permalink
I've been talking this up with friends and family and anyone else who would listen for a couple of years. I've sent emails to anyone who might have an influential voice. I don't understand why our domestic industry isn't being pressed to move it to market with a war time type of urgency. What keeps such an important breakthrough from going viral as an issue in this age of instant communications. Every consumer should be demanding this technology in the next vehicle they buy.