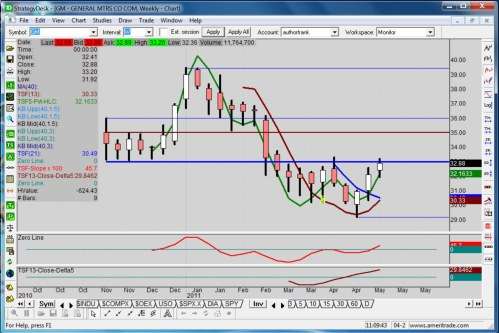 Market Close Update: Even before the April sales report, General Motors (NYSE: GM) stock gapped higher on the open. While the stock intraday found support at 32.82, it managed to trade even higher, closing near its original IPO offering price of $33.
Advertisement

The weekly chart shows a clear macro view of GM stock's price dynamics since its IPO. Market Close Update: Per the latest quote via TD Amertirade, GM stock closed Tuesday at 32.99, a penny away from its IPO price of $33.

According to breaking news on CNBC this morning, General Motors (NYSE: GM) surprised and beat the street on sales expectations with an increase of 21 percent.

GM stock actually jumped out of the gate before the report by opening higher at 32.41, likely the result of expectations in pre-market trading.

For the record, GM stock made a post-IPO low of 29.17 just a few weeks ago. Since that time, it has rallied back to test its initial offering price of 33 set in November, 2010 when the stock came back to trading publicly.

General Motors dealers in the United States reported 232,538 total sales in April, a 27-percent increase versus April a year ago. Solid gains by GM’s lineup of fuel-efficient passenger cars and crossovers powered the gains, led by the best sales month for the Chevrolet Cruze and record sales for the Chevrolet Equinox and GMC Terrain compact crossovers.

Retail sales, those to individual customers, rose 25 percent versus last April with cars and crossovers up 49 percent and 28 percent, respectively. Retail sales for the Cruze were 180 percent higher than the Chevrolet Cobalt it replaced. The Equinox and Terrain also posted retail sales records, up 53 and 61 percent respectively.

With gasoline averaging almost $4 per gallon, consumers are beginning to trade in larger vehicles for smaller, more fuel efficient ones.

“Recently, rising fuel prices have led many to re-think their vehicle choice,” said Don Johnson, vice president, U.S. Sales Operations. “Because of the investments we’ve made in fuel-efficiency and global product architectures, the company is well positioned to meet these needs.”

For more information, read the report directly from media.gm.com

Disclosure: Frank Sherosky, creator of the chart and author of "Awaken Your Speculator Mind" does not hold any stock, optionor futures position in this equity or futures at this time.