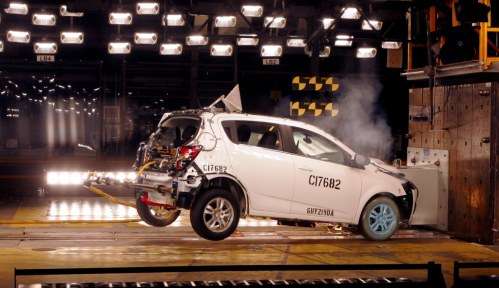 The IIHS tests vehicles to determine how well they protect occupants in front and side crash tests, in rollovers via a roof strength test, and in simulated rear impacts to evaluate seat and head restraints for protection against neck injuries; and the 2012 Chevy Sonic scored well enough to deserve Top Safety Pick.
Advertisement

The all-new 2012 Chevy Sonic, which has two more air bags than its subcompact competitors, is an Insurance Institute for Highway Safety (IIHS) Top Safety Pick. The Sonic achieved “good” scores in all four types of tests performed, including frontal offset and side impact.

The photo shows a 2012 Chevrolet Sonic undergoing a Front Offset Deformable Barrier Crash Test at a speed of 40 mph in the General Motors Vehicle Safety & Crashworthiness Lab at the GM Milford Proving Ground Wednesday, August 3, 2011 in Milford, Michigan. The passenger side airbags were suppressed for this test. (Photo by John F. Martin for Chevrolet)

For the record, the 2012 Chevy Sonic also has standard StabiliTrak electronic stability control, which the institute requires of all vehicles receiving a Top Safety Pick designation.

"Only vehicles that perform with the highest level of safety in their class earn the Institute's top accolade," said IIHS President Adrian Lund.

In addition to 10 air bags, the Sonic offers a body structure incorporating a single welded side ring unit. More than 60 percent of the vehicle safety cage consists of high-strength steel.

“We developed Sonic to exceed our customers' expectations of the subcompact market, both in the fun-to-drive performance characteristics and the segment-leading safety features,” said Joaquin Nuño-Whelan, Sonic vehicle line director and vehicle chief engineer. “This designation by IIHS confirms that Chevy customers can buy a subcompact with top safety performance.”

Sensors that control the deployment of 10 standard airbags are mounted into Sonic’s structure. The sensing and diagnostic module receives data from the car's sensors and establishes the severity of the impact and whether to deploy the airbags. The additional driver and passenger knee airbags can help reduce injury to lower extremities.

Another standard feature is Sonic’s hill-hold technology, which makes navigating hilly terrain with a manual as effortless as automatic. It’s a luxury-level feature that helps drivers maintain braking control on hills.

With this rating, the Sonic joins the Chevrolet Volt and the Chevrolet Cruze, two other small cars that recently received a 2011 IIHS Top Safety Pick.

GM media invites you to learn more about Sonic, by visiting the Chevy Sonic Facebook page.