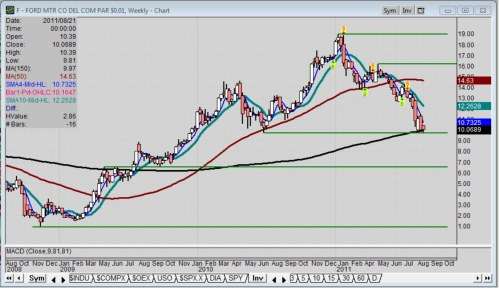 Ford stock may be fairly priced after all

Looking at the weekly price chart of Ford Motor Company (NYSE: F) stock and the company reports on its performance, you would think Ford stock would be doing better than trading near $10; that is, until you compare valuation ratios of other automakers like Toyota, Honda and GM.
Advertisement

Point is, when you look at the valuation ratios relative to other companies in the auto stock sector, such as Toyota (NYSE: TM) , Honda (NYSE: HMC) and General Motors (NYSE: GM), you get a much different message.

For example, according to the profile data from MarketWatch.com, Ford stock is the highest of the four in terms of price/book ratio which stands at 7.16 versus .87 for Toyota, 1.03 for Honda, and 1.10 for GM. I know Ford put everything including the blue oval as collateral for loans; so, perhaps that is the underlying reason. However, all have been adjusted lately for lower price/book, except Ford still has a long way to go at least on that measure of valuation.

Important point is, Ford stock, despite all the hoopla about its earnings, may be justly priced at 10.01 as of Monday’s close; and may be still too high when compared to the ratio valuations of its competition. Can Ford go up from here? Sure, but the general market will have to make the pathway, in my opinion.

In a TN report just two months ago, I reported Ford Motor Company (NYSE: F) stock was tanking despite its April sales report that showed an increase of 16 percent versus one year previous and a year-to-date sales up 16 percent. Well, it has since trended even lower with lower lows and lower highs.

Even my report in May showed the monthly chart with its macro view of Ford Motor Company stock performance with a picture of bearish trend bias since last April. Again, not much has changed since then.

Ford products surely look outstanding these days and definitely comparable if not a cut above in some areas. The linking of the automobile to the web with hands-free features is the wave of the future, as is its wireless technology for safer vehicles which I observed first hand in Dearborn. And the 6-cylinder EcoBoost engines are performing like V8s.

However, one has to ask just how Ford is going to reach the upcoming government fuel mileage regulations. After all, all the engine technologies the automakers have on the table at present are comparable; meaning, nothing is a standout. All have turbos, direct injection and variable valves and cam timing. The only exception is Toyota’s cheaper hybrid system in the Prius that has taken the small-car segment by storm.

You can’t really count Chevy Volt in this comparison, because the cost is too high and helped mostly by government subsidies. Same goes for the Nissan Leaf, although it is a bit cheaper but a full electric. Of course, I have not forgotten that Ford is bringing out the Ford Focus EV.

Latest news also has Ford aligning with Toyota on hybrids for light trucks, but hybrids come in greater forms than just electrical that may be less expensive.

And Ford, like the other automakers, have not extended their research sufficiently to gain from new IC engine technologies that center on splitting the Otto cycle for maximum thermal efficiency, as have Scuderi and Tour.

At least GM is introducing a diesel for the Chevy Cruze. Even there, the split cycle would provide that needed gain efficiency so desperately needed, because the ability to make an air hybrid is real, and will be highly cost effective.

Of course, all automakers have this challenge over which technology to choose. That is why all are hedging their bets with an array of propulsion technologies. Electrification surely helps on the lower end of the driving scale, where in the city we do most of our driving. However, do not underestimate the capability of an air hybrid, nor hydraulic hybrids for large trucks and busses.

One look at the weekly stock chart for Ford and you see a bear-trend bias. Point is, this is reality, as the market and businesses deal with many uncertainties from government and the economy in general. Then there is the upcoming strike factor at Ford from the UAW. So, what you see in the Ford stock chart reflects all of this; meaning, how the street looks at Ford stock as they vote with their pocketbooks.

From the chart’s technical analysis perspective, though, Ford stock has major upside resistance at the highs of April at 16.18 and in January at 18.97. That’s quite far from the Monday close of 10.01, except for the 50-week moving average at 14.63.

On the downside for support, the stock is sitting at the late June low on the daily chart of 9.75. This just so happens to coincide with the 150-week moving average at 9.97. Two indicators coming together is a major factor to consider. If broken, look for the next major target at the September 2009 low of 6.61.

Whether Ford stock ever go this low, I do not know; nobody knows for sure. However, the external market is not helping as it reads the same news that you do, that the volume targets for the industry are being lowered to reflect the lack of buying power in an economy that is looking into the abyss called a double-dip recession, unless the Fed pulls a Jackson Hole in one.