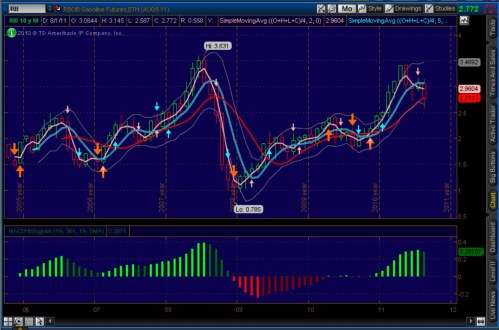 If the auto stock sector was looking for help in today's market sell-off, they certainly did not get much from Michele Bachmann, GOP presidential hopeful, who blamed President Obama for increasing gas prices, and said she would change that by reducing gasoline to $2 per gallon, but without a clear plan.
Advertisement

The web is ablaze with political remarks, especially when it comes from a GOP candidate for president. The hope is Michele Bachmann didn’t jump the shark this time with her promise of $2 gasoline that she in no way can guarantee for any great length of time.

For one, just check the monthly chart of the August 2011 futures contract here and notice the volatility. Nobody, not even a great president, male or female, can control that.

And no matter how much I research Bachmann's speeches, there is still no distinct answer which would lead anyone to believe she could deliver let alone guarantee; unless she plans on reducing all taxes on gasoline; and much of that is state regulated. If so, who will pay for the roads?

As a Michigan resident, I heard that kind of political rhetoric and promises before from former democratic Governor, Jennifer Granholm. Yes, she said she would blow us away in Michigan; and she did!

In regards to Bachmann’s claims, sure, gasoline was $1.79 just before Obama became president, and now it’s $3.50 on average per AAA. The market also crashed from the mortgage mess and crushed the economy. Furthermore, Egypt and Libya went into political turmoil. Japan was crushed by an earthquake and a tsunami.

Point is, there is more affecting oil and gasoline than just American politics and economics.

Of course, Bachmann didn't go into great detail on how she would cut gasoline prices amidst all those conditions noted, but she did mention increased oil development in the Western states. Fact is, the U.S. has surely limited oil development in recent years, and India plus China have joined the throngs with a thirst for energy. More demand drives higher prices; it’s a tried and true formula.

Now more reality: Even if America did ramp up oil production, it likely wouldn't have a huge immediate impact on the price of world oil. Again, China and India are growing their energy needs, not diminishing them. And Obama didn’t do much to prices by releasing oil from the strategic reserves, did he?

Any trader worth his or her salt knows one thing: the price dynamics for gasoline is related to a host of interrelated factors, including the US dollar which affects the price of oil itself, the Federal Reserve rates, the congressional budget, taxes, revenues, national debt levels, just to name a few.

Point is, any one of these is a major factor and not directly controlled by the president; and, if possible, only if and when the president can get everyone in Washington to agree. However, there are still those damned black swan events in the world that no president can account or foresee. Just ask Japan or New Orleans.

Of course, the first order of business for the next American president has to be a national energy policy. I recall Jimmy Carter wanted one while he gave a fireside chat to the nation in his cardigan sweater; and many presidents came and went since then, all without a policy. Even if achieved, that policy would still be still subject to free markets, unless Bachmann intends to suspend those.

As a day trader and swing trader who delves in the futures markets as well, I dare say she does not understand market dynamics at all. True, if all the factors were lined up just right, gasoline could go back to $2 per gallon. That, however, negates the fact that easy supplies of oil are no longer available. Oil that is free from middle eastern influence now comes from deep waters of the oceans.

From an automotive technology viewpoint, a redesign of the internal combustion engine would surely help, like the split-cycle engine that automakers seem blind to notice. See, drill, drill, drill is not the one and only solution.

Sure, America can drill more in the outer banks. Sure, we can import more oil from Canada’s oil sands. That, however, will likely go to the highest bidder around the world, no matter how cheap it can be produced, and no matter how close we are. What’s that old saying about money talks and BS walks?

See, in the world economy, America is just another energy customer, and subject to the same supply and demand factors as the rest of the world. After all, we wanted free markets, and we got it; well, at least to some degree. And if the outside world wants to pay more for oil to get supply, then how would Bachmann ever control that?

You cannot have it both ways: free markets and a sure promise to deliver $2 gasoline. Point is, she was foolish to say such a thing, and should have exhibited better judgment.

Furthermore, anybody with any sense would know that natural gas has the cost edge by a giant factor. Perhaps that is part of the Bachman plan, but that was not clear at all.

Sharp on words and promises, in my opinion, but very dull on understanding reality. Too bad, because I rather liked Bachmann’s spunk in the GOP race. Now it’s strike one on the campaign trail!

Independent see... wrote on August 19, 2011 - 7:03pm Permalink
Bachman's $2.00 gas statement confirms that she is perhaps the most ludicrous of the gaggle of clowns (Huntsman excepted) seeking the Republican nomination. Pray that the GOP can bring itself to give the country a real choice in 2012.